ATLANTA, Georgia, May 31 2013 (IPS) - The U.S. Congress is on the brink of making billions of dollars in cuts to the Supplemental Nutrition Assistance Programme (SNAP), commonly known as food stamps, which provides direct benefits to individuals and families in poverty.

SNAP benefits are already set to decrease in November 2013, when increased benefits that were included in the American Recovery and Reinvestment Act of 2009, or federal stimulus package, expire. 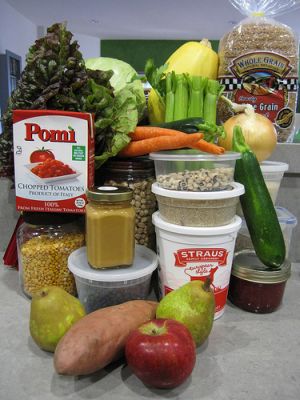 A selection of foods available on a food stamp budget. Credit: Miss Karen/cc by 2.0

Benefits – which currently represent a “bare bones diet” prepared by the federal government – will already decrease between eight and 25 dollars per month, depending on household size. The average benefit is already as low as one dollar and 46 cents per person per meal.

But that is not enough for the current Congress, which is seeking to squeeze even more money out of the emergency food programme.

Groups like the Progressive Democrats of America have been circulating an online petition to oppose the cuts.

“Food is a major issue for people who really just can’t afford groceries. What we realise is the average low-income person is on minimum wage or a fixed income. Most poor people do work. They may not work full-time jobs,” Dorsey said.

“There are no other income sources to turn to – the jobs are still hard to find, or jobs are not paying wages that allow a person to live at the standard level in their region, then naturally they’re going to need their assistance.”

Today, a record 47.5 million U.S. citizens receive emergency food assistance through the SNAP programme, according to the most recent data from the Department of Agriculture, making up more than 15 percent of all U.S. residents.

The debate is centring around the Agriculture, Reform, Food and Jobs Act of 2013 – commonly known as the Farm Bill – which Congress typically reenacts every five years to set national policies for agriculture, nutrition, conservation, and forestry.

On May 15, the Republican-led House Agriculture Committee voted to approve nearly 21 billion dollars in cuts to SNAP. The cuts would represent a loss of benefits to nearly two million people, including children, by changing the eligibility requirements.

These are people who are currently eligible to receive food stamps because they have disposable incomes below the poverty line, even if they have assets or gross incomes that push them above the SNAP eligibility threshold.

According to the Center on Budget and Policy Priorities (CBPP), many low-income U.S. households that own a modest car would be impacted. It may also include working families with high childcare costs, or seniors with high medical bills.

The House bill also would eliminate SNAP incentive payments to states that have improved payment accuracy and service delivery; would cut nutrition education funding; and would curtail an option that allows states to approve families for SNAP benefits if they already qualify for low income heating assistance – something the Senate version of the Farm Bill also does.

On May 14, the Democratic-led Senate Agriculture Committee voted during a hearing to approve 4.1 billion dollars in cuts to SNAP.

“It stops overpayments to a small number of individuals in the programme… A small number can claim a heating bill they don’t have, on food assistance, to get additional benefits above and beyond,” Cullin Schwarz, a spokesman for the Senator Debbie Stabenow, a Democrat from Michigan who chairs the Committee, told IPS.

Schwarz claims states are using administrative tactics – qualifying people for separate energy assistance payments of under 10 dollars per year – purportedly for the sole purpose of increasing their food stamp eligibility.

“Fifteen states are providing a very small amount of home heating assistance, as little as one dollar or 10 cents per year. There are some folks who don’t have a heating bill, it’s included in their rent. That [dollar] doesn’t really help someone pay heating – what it does, they can claim both rent and a heating bill they don’t have on their application,” he said.

If enacted, the Congressional Budget Office estimates that 500,000 people will receive on average 90 dollars less under the Senate bill.

But Stabenow’s office insists this is not a cut to the benefit structure. “They’re going to get exactly what they’re supposed to get on the programme based on their real expenses,” Schwarz said.

When asked what would likely come out of House and Senate negotiations, Schwarz said, “If Republicans can up with additional ways to reduce spending that does not reduce standard benefits or harm truly needy families… we’re open to discussing those.”

Senator Kirsten Gillibrand, a Democrat from New York, offered an amendment to strike the SNAP cuts from the Farm Bill, and to offset the costs by limiting crop insurance reimbursements to providers.

Congress is encouraging farmers to purchase crop insurance, and Congress is subsidising the crop insurance companies, as it is also ending a longstanding policy of direct payments to farmers. This switch saves 16.5 billion dollars from the federal budget.

Gillibrand contends the reimbursements, however, are corporate welfare, in some cases for overseas companies.

“Families who are living in poverty, our children, our veterans, our seniors, some of our active duty personnel are going to suffer if we cut food stamps. I believe we should not be balancing the debt or the deficit on the backs of these hardworking Americans who are just hungry,” Gillibrand said during the hearing.

“And I think it is a moral statement, and obviously I will fight against any cuts to the food stamp programme and I want people to think about what they’re actually doing when they offer, the nature of these amendments,” Gillibrand said.

Gillibrand brought the amendment to the Senate floor debate on the Farm Bill.

The amendment failed in a vote of 26 to 70, with more than half of the Democratic caucus joining nearly all Republicans in voting no.

However, an amendment by Senator David Vitter, a Republican from Louisiana, to end SNAP eligibility for convicted violent rapists, pedophiles, and murderers, passed by unanimous consent.