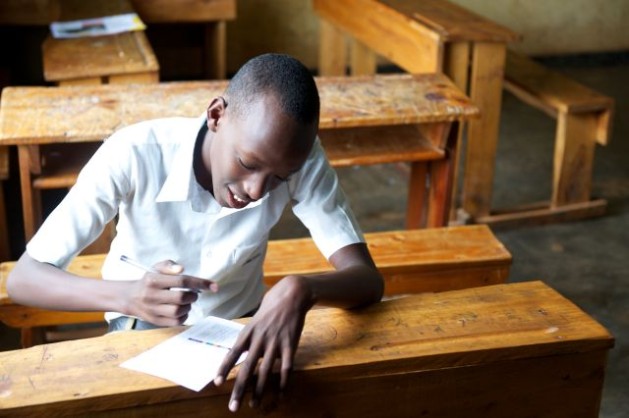 UNITED NATIONS, May 28 2013 (IPS) - Kanny Daylop, a legal practitioner and consultant from Nigeria, recalls her encounter with a woman named Joy.

“She was young, probably a teenager,” Daylop said.

"It is a useful guide for us but the conversation has to be far more holistic and far more real." -- NFI's Amitabh Behar

Contrary to her name, Joy’s life was filled with hardship. She became pregnant and dropped out of school. Her parents threw her out of their house. Since then, she has been working as a seamstress to earn money to take care of herself and her unborn child.

Joy wants a better life for herself.

“Education and then healthcare are her topmost priorities,” Daylop said.

As a youth advocate for the United Nations Millennium Campaign (UNMC), Daylop interacted with many women like Joy as well as hundreds of Nigerians who participated in “MY World”, a United Nations global survey where citizens from all over the world are voting on issues they think are important in their lives.

The survey results will be used for the future development agenda of the U.N. after the Millennium Development Goals (MDGs) end in 2015.

The “MY World” survey offers individuals a list of 16 issues to choose from. The voters are then required to prioritise six of those issues they consider most important to their lives.

The anonymous survey, which began early this year, requires participants to list their gender, age and country for the purpose of analysis. People vote online, through mobile phones or offline, using pen and paper.

Corinne Woods, global director of UNMC, said the ongoing survey is a “true partnership” involving non-governmental organisations, grassroots groups, private sector bodies, youth groups and different players across many disciplines to reach out to people living in the remotest areas around the world.

The survey will continue until 2015.

“Right now there is a global moment in time where the world is going to decide what are going to be the new sets of sustainable development goals,” Woods said. “So this is a particular moment in time where as a citizen I can say to my government ‘I think you should sign up to X, Y and Z’.”

While thousands of voters continue to participate in the survey, the U.N. initiative has generated scepticism among some voters and members of civil society.

Amitabh Behar, executive director of the National Foundation for India (NFI), said that his experience with “MY WORLD” has been “both interesting and frustrating”.

In a developing country like India, Behar said, “When you actually talk to people, they don’t see their life in a structured fashion.

“People will not want to make those choices and we also think that these are not fair choices to be asked,” Behar said. “I think it is the responsibility of the state, either national or globally, to ensure safe drinking water as well as good education as well as good health as well as no discrimination and so on. But this is like putting a gun to somebody’s head and saying ‘pick one of those’.”

In regions within the least developed and developing countries, resources are limited and challenges are too many. Add to that corruption, which is more a way of life than just an evil.

In such countries, choices cannot be exclusive of each other, Behar said.

Moreover, most of the voters are clueless about the MDGs and post-MDG process, say members who carried out the survey on behalf of the U.N.

There is also a growing trust deficit when it comes to what the global body promises to do and what it actually does.

“This also stems from the fact that it’s not the first time that they are being asked about such things, but they have never seen follow-up action to change their reality,” Behar said.

In Mexico, where a little less than 7,000 people have voted so far, voters weren’t sure if the U.N. as a world body was really effective in alleviating problems, said Juan Varela, international advisor to Axios Misión Mujer, A.C., an organisation which works with adolescents in Mexico.

Varela said that people believed that this was just another survey and that the national government wasn’t actually going to do something with the results. “So some of the people actually didn’t want to vote,” Varela added.

Like Mexico, people’s approach to the survey in Nigeria, too, was cynical. Some had lost hope and some had lost confidence in the government. With the Nigerian militant group Boko Haram wreaking havoc across the country, Nigerians want to see quick results from such initiatives.

“People understood that research was going on in various areas, but they haven’t seen any impact,” Daylop said.

The crux of the matter, as Behar points out, is the “very idea of looking at an aggregate picture.”

With different regions having different sets of problems, the survey may not reflect the actual situation on the ground. “The second thing is the interconnectedness of all these – only when you have safe drinking water will you have good health and so on.”

But critics like Behar also acknowledge the fact that the very nature of a global survey requires uniformity.

“Therefore, we have to take it with a pinch of salt or a bagful of salt to understand that it is a useful guide for us but the conversation has to be far more holistic and far more real,” he added.

Woods acknowledges the fact that while different countries have different issues, there is certain amount of continuity, too.

The collated data all over the world indicated greater need for education and heath care as well as “an honest and responsive government”. There were some problems that most countries had in common, Woods said.

Some of the largest number of voters came from Nigeria (157,843 votes as of now) and India (79,450 votes). But participation levels varied widely, with countries like Turkmenistan contributing only 45 votes towards the survey. Close to 400 people voted from Iran and there were nine votes from Guinea-Bissau.

More than half of the votes have been collected offline.

The survey as of now heavily weighs towards Africa, but “the aim is to reach as many countries as possible,” Woods said.

With local organisations are playing an important role to reach out to people in different countries, careful observations are made on voting patterns so that regional groups do not end up pushing their agendas via this survey, she added.