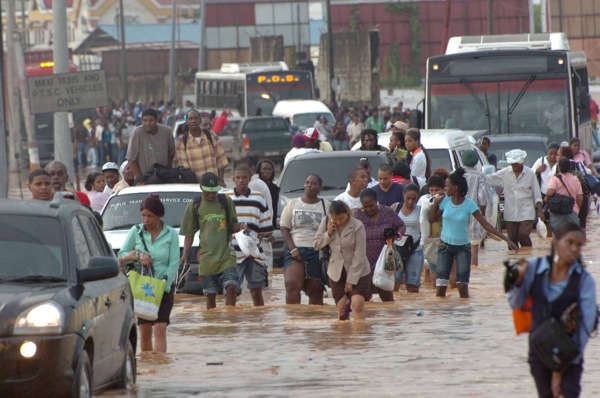 Residents make their way through the flooded streets of Port of Spain, Trinidad. Credit: Desmond Brown/IPS

KINGSTON, Jun 25 2013 (IPS) - It has taken just eight inches of water for Jamaica to be affected by rising sea levels, with parts of the island nation have disappeared completely, threatening people’s livelihoods and much more.

“People speak about the likelihood of Barbuda disappearing in 40 years, but this is a reality in Jamaica at the present time,” Conrad Douglas, a Jamaican scientist who has published more than 350 reports on environmental management and related topics, told IPS.

He pointed to the example of a set of cays called Pedro Cays, of which one “has completely disappeared”.

Pedro Cays are four small, flat (two to five metres high), low-lying and mostly uninhabited cays. The sparse land vegetation consists of six species of plants, none of which are endemic. The cays are regionally important seabird nesting and roosting areas, and they also provide several endangered turtle species, such as hawksbills and loggerheads, with nesting grounds.

More than 400 Jamaicans live for months at a time on the island’s Pedro Cays, which are the primary harvesting area for the largest export of Queen Conch from the Caribbean region.

Douglas said the disappearance of the cays is affecting people’s livelihoods, incomes and lifestyles, “exposing us to all sort of other problems that could threaten the security of the country and of the region”.

Should the phenomenon continue, and “if we don’t adapt”, the entire planet will physically change, he warned.

"Time is certainly not on our hands...The time for action is now.”
-- Kenneth Darroux

“We’ve heard the horror stories of some islands in the Pacific already disappearing, so time is certainly not on our hands,” Kenneth Darroux, Dominica’s minister of the environment, told IPS. “The time for action is now.”

Even though Caribbean countries contribute minimally to the causes of climate change that lead to issues such as sea level rise, these countries are the ones who stand to lose the most, Darroux said.

The United Nations has estimated that by the year 2100 the Marshall Islands could be swamped by encroaching waves.

While climate change has the potential to make islands disappear, it also affects people and places globally and can severely damage quality of life.

The World Health Organisation blames 150,000 deaths per year on the effects of climate change, including extreme weather, drought, heat waves, decreased food production and the increased spread of diseases like malaria.

Scientists also warn that if current carbon dioxide emission trends continue, the world’s coral reefs could be virtually destroyed by 2050.

Darroux said one of the biggest challenges faced by small island developing states like Dominica in dealing climate change has to do resources, financial and otherwise.

Last year, authorities there unveiled a Low-Carbon Climate-Resilient Development Strategy, and Darroux said they intended to take advantage of some of the millions of dollars available to help countries deal with climate change and its effects.

Dominica also wants to show its Caribbean neighbours how they could benefit from the same funding, Darroux said.

“We have this PPCR [Pilot Programme for Climate Resilience] project,” he pointed out, noting that almost 200 million dollars have been committed to Dominica over the next five years to help it build climate resilient projects.

He called for “collaboration and unity” among Caribbean countries, noting they each had success stories they could share.

Still, Darroux admitted, “It’s all very nice to say, ‘We are going to do this or that,’ but at the end of the day we have to face the reality of the financial environment in which we work.”

“We can propose certain initiatives, but one hurricane could hit us and then monies that were proposed to implement new initiatives, 99.9 per cent or 100 percent of the time, have to be diverted to recovery efforts after these erratic storms that [hit] us every year from the Atlantic.”

John Crowley, a senior manager of social dimensions of global environmental change at the Paris-headquartered UNESCO, has also urged regional countries to share their knowledge of matters that currently have been insufficiently studied with respect to the social and human dimensions of climate change adaptation.

He noted that it is by creating that web of knowledge, societies could find new ways to sustain themselves and prosper.

Addressing dozens of scientists and other delegates at a recent UNESCO-sponsored meeting on environmental policy formulation and planning in the Caribbean region, Crowley suggested that the prevailing approach to climate change adaptation as framed by the international community in the past 10 years is probably not the right one.

“The prevailing view is basically as follows: there will be a comprehensive global agreement on emissions reduction someday, and it will make the problem go away,” he explained. “In the meantime, we have to protect ourselves against transitory impacts, and the best way of doing that is [with]…hard infrastructures, protective infrastructures.”

“I think there is a growing feeling that that might be wrong and perhaps even dangerous,” Crowley said, adding that adaptation problems are likely to be permanent, not transitory. He said he was “not sure that hard infrastructure solutions” were the best option, as they themselves were vulnerable.

“Sea walls, for instance, depend on assumptions about sea level rise that are inevitably uncertain,” he pointed out. “Those options are irreversible and have very high opportunity costs. Once you’ve committed scarce resources, those scarce resources are not available for anything else.”

Crowley called for greater emphasis on softer solutions to climate change adaptation, solutions based on social change rather than on infrastructure.

“They are more flexible and have lower opportunity costs,” he said, even as he noted that “we lack knowledge on how to implement socially based solutions, and when we try, we often fail.”