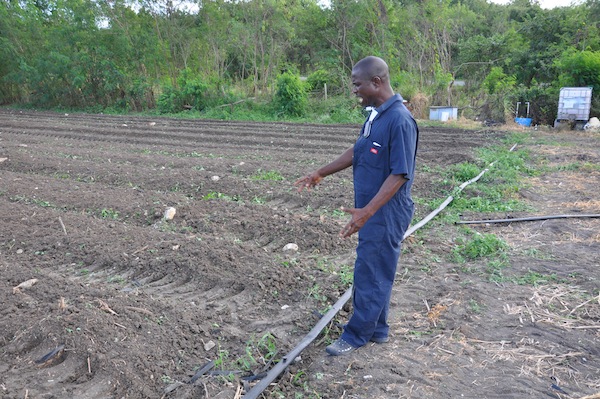 Owolabi Elabanjo, an agriculture extension officer based in Antigua, says the country has suffered much damage from hurricanes. Credit: Desmond Brown/IPS

ST. JOHN'S, Antigua, Jun 12 2013 (IPS) - With their islands devoid of rivers or streams, farmers in Antigua and Barbuda have been building dams and ponds for centuries, harvesting rainwater to irrigate their crops and provide drinking water for their livestock.

But now with the advent of climate change, they are facing major challenges. Stronger and more frequent storms regularly destroy trees planted around catchment areas as watershed as well as grass planted in and around these areas to slow evaporation.

Elabanjo said water is one of the most important factors of production in agriculture.

“You can use any other material apart from land to grow food, but we still need water to put into that material, so water becomes the number one factor of production,” he said.

But, he noted, water is a scarce and therefore expensive commodity, not only for agriculture but also for home use.

Elabanjo said the Ministry of Agriculture has been partnering with the Antigua Public Utilities Authority (APUA) and the Food and Agriculture Organisation (FAO) to educate farmers about rainwater harvesting and to create better opportunities for water use.

"If we are serious about food security and reducing our food import bill, we have to do something about water."
-- Owolabi Elabanjo,

“If we are serious about food security and reducing our food import bill, we have to do something about water,” he told IPS.

Lystra Fletcher-Paul, land and water officer and the FAO representative for Guyana, agreed, noting that one of the key issues for water management is allocating water for agriculture.

“In a number of countries, you find that the priority is always water for domestic use, water for health, water for manufacturing, and if there is any water left they give it to agriculture,” she told IPS.

“You can’t be serious about food security if you are going to leave water for agriculture as the last priority. You have to have a strategy which says, ‘whether we have a drought or not, agriculture is going to get this amount of water.'”

In 2008, Antigua was one of eight countries to benefit from a study of the feasibility of rainwater harvesting conducted jointly with the Caribbean Agricultural Research and Development Institute (CARDI), the Inter-American Institute for Cooperation on Agriculture (IICA) and the Caribbean Development Bank (CDB).

At the end of the study, the research group found rainwater harvesting in Antigua to be very feasible because the island receives an average of about 750 millimetres of rain per year.

Fletcher-Paul emphasised the importance of having a disaster risk management plan for the agricultural sector.

“Hurricanes are a normal event now; we’re talking about climate change,” she said, adding that the Caribbean would be facing more extreme weather events.

Protection must be set up in advance, whether well ahead of the hurricane season or just before, Fletcher-Paul said, such as planting trees around dams or grass to help hold soil.

Agriculture Minister Hilson Baptiste told IPS that Antigua and Barbuda has been taking climate change seriously. And through what’s known as the Climate Project, the Ministry of Agriculture and the Environment Division have been on a drive to combat deforestation, one tree at a time.

Launched in June 2010, the goal of the Climate Change Project was to plant 2010 trees. Three years in, Baptiste boasts, “We plant more trees in Antigua than any other country in the Caribbean.”

Twice a year, school children are taken on a tree-planting trip, planting between 5,000-6,000 trees.

Every year on Arbor Day, “we give out half a million plants to schools, community groups and church groups to encourage citizens to plant a tree,” Baptiste told IPS. “Orange, avocado, breadfruit and mango trees are planted,” he added.

The agriculture minister said that having seen the effects of climate change on crop production, Antigua and Barbuda has no choice but to intensify its efforts to mitigate climate change.

Just as important are the island’s forests, the agriculture minister said, noting that not a single tree is destroyed in the food production process.

“Farming is done in between the forests and sometimes below the forests. No destruction of forests takes place to facilitate agriculture,” he told IPS.

Ashley Joseph, deputy director in the Ministry of Agriculture, agreed the environment should not suffer at the cost of food production.

“If you don’t protect the environment, after a time, your production is going to dwindle. So you have to take into consideration the environment when you are producing,” he told IPS.

For example, the government educates farmers about controlled grazing. “Where there is overgrazing, the grass and the herbage in pastures is depleted,” Joseph described.  “When that happens the ground is left bare, and whenever it rains, the top soil is washed away, and the production becomes less and less.”