The páramos or high plains grasslands of Ecuador, the most extensive in South America, are disappearing. 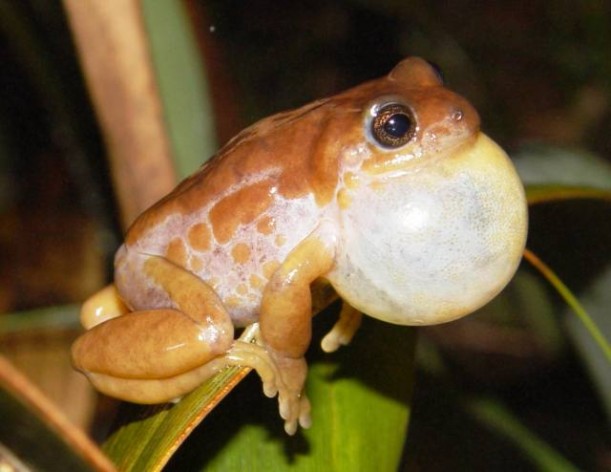 Pristimantis orcesi, a species of frog found only in the páramos of Ecuador. Credit: Courtesy of the Private Technical University of Loja

QUITO, Jun 4 2013 (IPS) - The “páramos” or high plateaus of Ecuador, a crucial source of water, are showing signs of extreme fragility and a troubling loss of capacity to conserve this vital resource and sustain the survival of numerous species found nowhere else on earth.

The páramo is a high mountain ecosystem situated between 3,200 and 4,200 metres above sea level, and one of the most vulnerable in Ecuador. The threats that it faces are the result of climate change, deforestation and changes in land use.

The jambato toad (Atelopus ignescens) has already disappeared from the páramos, and there are fears for the survival of various species of mammals.

These high plains grasslands function like a sponge, absorbing and storing large volumes of freshwater which are then released continuously and gradually, feeding river systems and preventing abrupt variations in their flow.

But the páramo ecosystem has a limited capacity for recovering its original structure and biodiversity once these are altered, warned the founder of the non-profit scientific organisation EcoCiencia, Patricio Mena.

“It is intrinsically very fragile, which means that any disturbance, and even rains and winds, cause significant effects in the short, medium and long term. This is why it must be treated with great care,” Mena told Tierramérica.

The páramos are disappearing and vital water resources are being absorbed by the highly permeable volcanic soils beneath them: this was the warning sounded at the 7th Ibero-American Seminar on Science Journalism, held May 16-17 in the southern Ecuadorian city of Loja.

One particularly delicate issue is that of oil exploration and drilling in the páramos, observed Spanish seminar participant Seber Urgarte, a professor from the communications department at Abat Oliba CEU University and currently a guest researcher at the Private Technical University of Loja (UTPL).

This is why it is crucial to “preserve these ecosystems in light of their water and energy resources and biodiversity, above and beyond economic and political interests,” he told Tierramérica.

Mena stressed that the páramos supply water to indigenous communities and large cities alike. “Quito depends almost 100 percent on the water produced and stored in the surrounding páramos,” he said.

A study conducted as part of the Andean Páramo Project (PPA) found that these high plateau ecosystems are found in 18 of Ecuador’s 24 provinces. The most important are those of Napo, in north-central Ecuador, and Azuay and Morona-Santiago, in the south.

The PPA, which concluded in 2012, was a joint initiative of the Global Environment Facility (GEF) and the United Nations Environment Programme. It was implemented in Ecuador, Venezuela, Colombia and Peru, with project activities emphasising research and local community participation. EcoCiencia was the Ecuadorian counterpart.

Close to 40 percent of Ecuador’s páramos are protected. The largest protected area is in Sangay National Park, which straddles the provinces of Morona-Santiago, Tungurahua, Chimborazo and Cañar, and accounts for 261,062 hectares. Of the remaining 60 percent, 30 percent have been altered by human intervention, and 30 percent are degraded, the study says.

But Mena, who formed part of the PPA team, stressed that “it is difficult to specify a percentage” or calculate an exact number of hectares that are degraded. Instead, it should be recognised that “all of the páramo is affected, because climate change affects the entire ecosystem.”

In general terms, the páramos of the eastern mountain range, which are moister and whose original biodiversity has remained intact, have a greater capacity to respond to environmental alterations, while the western páramos have suffered more serious impacts.

This is why Mena prefers to speak in terms of “a mosaic that ranges from perfectly well-preserved páramos to ecosystems in a state of profound degeneration that has practically transformed them into highly fragile deserts, like the dry páramos of (the central province of) Chimborazo.”

The páramos of Ecuador are characterised by a high degree of endemic flora and fauna. They are home to five species of reptiles, 24 of amphibians, and 88 of birds, of which 24 are found nowhere else.

According to the National Statistics and Census Institute, there are 565,858 hectares of arable land in Ecuador’s páramos, representing 4.85 percent of the country’s 11.6 million hectares of farmland.

In the meantime, “the area of land in the páramos under concession for mining activities decreased ostensibly, from 40.46 percent in 2008 to 12.53 percent in 2009,” engineer Fausto López from the department of natural sciences at UTPL told Tierramérica.

Mining concessions are concentrated in the south, in the provinces of Azuay, Loja and Zamora Chinchipe.

López believes that “the environmental cost is high, due to the threat to the habitat of numerous species of flora and fauna.” The most vulnerable are the mountain tapir, spectacled bear and culpeo or Andean fox, as well as the various species of amphibians.

“Given that these species need large areas for their survival, the establishment of corridors or networks of protected areas is one of the best strategies for their conservation,” he added.

But biologist Carlos Iván Espinosa explained that “one of the problems in the tropics is the lack of historical information on species and even on climate behaviour.”

“There are many species that have still not been described and that could be disappearing due to the effects of climate change,” argued Espinosa, also a researcher at UTPL.

The biggest challenge, stressed Mena, is to raise awareness of the fact that “the páramos are a part of our daily lives in an indirect by fundamental way: through the supply of water.”