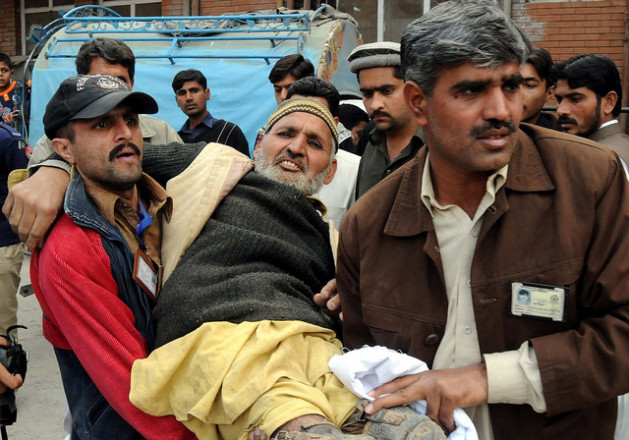 The war against terrorism has left many Pakistanis disabled. Credit: Ashfaq Yusufzai/IPS

WASHINGTON, Jun 12 2013 (IPS) - The world – especially the Greater Middle East – has become less peaceful than it was five years ago, according to the 2013 edition of the annual Global Peace Index (GPI) released here Tuesday by the Institute for Economics & Peace (IEP).

Consistent with that trend, the Index also found that global peacefulness declined over the past year, chiefly due to the intensifying civil war in Syria; the rising number of homicides, especially in Mexico, Central America, and several sub-Saharan African countries; and increased military spending as a percentage of gross domestic product (GDP) in many nations.

Led by Iceland, Denmark and Austria, the Index found that Europe remained comfortably the world’s most peaceful region over the past year, while South Asia was the least peaceful, dragged down by Afghanistan, which ranked 162nd of the 162 countries covered by this year’s Index, and Pakistan, which claimed the 157th spot.

But the Middle East also fell close to the bottom, due to the raging conflict in Syria (160), the uptick in sectarian violence in Iraq (159), continuing conflict in Sudan (157) and Yemen (152). Israel (150) also brought down the region, due its short war with Hamas in November and the rise in its military spending that followed.

This year’s Index also estimated that the impact of violence – as assessed in major part by the costs, such as budgets for defence and internal security — on the global economy in 2012 came to at least 9.5 trillion dollars, or 11 percent of the gross world product — nearly double the value of the world’s total food production.

“Were the world to reduce its expenditure on violence by approximately 50 percent,” according to the Index, “it could repay the debt of the developing world (4.076 billion dollars), provide enough money for the European stability mechanism (900 billion dollars) and fund the additional amount required to achieve the annual cost of the Millennium Development Goals (60 billion dollars).”

And it found a correlation between those countries hardest hit by the 2008 global financial crisis and a decline in their peacefulness compared to those countries that were not as badly affected.

“Cuts to public services and social protection, alongside increasing unemployment, has led to increases in violent demonstrations, violent crime, and perceptions of criminality in many countries,” according to the 101-page report.

The Index, which is based on 22 indicators of the existence or absence of violence or fear of violence, is compiled from a number of universities and institutions that maintain relevant assessments and statistics, ranging from the Economist Intelligence Unit (EIU) and the World Bank, to the Stockholm International Peace Research Institute (SIPRI) and Amnesty International.

The indicators include those that are relevant to internal peace, such as the number of homicides and internal security officers and police per 100,000 people and the level of political instability and terrorist activity as assessed by the EIU; and to external peace, such as the size of a country’s military budget, the number of armed-services personnel per 100,000 people, its arms transfers, and the numbers of external conflicts in which it is engaged.

Each indicator is given numerical score which is then weighted on a one-to-five scale according to its relative importance in making an overall assessment of peacefulness.

In contrast to Canada, the U.S. ranked 99th — and 31st out of the 34 members of the Organisation of Economic Cooperation and Development (OECD) — just above China (100).

The disparity between the two North American neighbours, according to the report, is explained by its high incarceration rate; its large and active military and involvement in foreign conflicts; its high homicide rate; ease of access to small arms; and its military capabilities and budget, which, while currently declining modestly, remains greater than at least a dozen of the world’s next biggest military powers.

Aside from New Zealand (3) and Japan (6), both Australia and Singapore were found to be the most peaceful countries in the Asia-Pacific region. By contrast, the Philippines (129), Thailand (130), Myanmar (140), and North Korea (154) were the least peaceful.

Pyongyang, according to the report, has the world’s highest incarceration rate and by far the greatest proportion of military expenditures relative to GDP (20 percent).

Since 2008, the Index found that 48 countries have become more peaceful while 110 countries have moved in the opposite direction. Regionally, the greatest deterioration has taken place in the countries of the former Soviet Union and, even more so, in the Middle East and North Africa, particularly in the last three years with the onset of the so-called “Arab Spring”.

The greatest improvements over the five years have taken place in Chad, Georgia, and Haiti, according to the Index. At the same time, the greatest deterioration by far has taken place in Syria, followed by Libya (despite the past year’s improvements), Rwanda, Madagascar, Cote d’Ivoire, Yemen, Mexico, Tunisia, Oman and Bahrain.

Among other factors that contributed to the negative trend were the outbreaks of violence associated with the Arab Spring; a deterioration of security in both Afghanistan and Pakistan; the civil wars in Libya and Syria; the escalation of the drug war in Central America; violence in Somalia and the DRC, and unrest caused by recession in a number of European countries, the report said.

This year’s report also featured a Positive Peace Index (PPI) which assessed the strength of attitudes, institutions, and structures of 126 nations – based on 24 indicators divided into eight interdependent categories — to determine their capacity to create and sustain a peaceful environment.

These categories, or “Pillars of Peace”, include equitable distribution of resources, levels of human capital, transparency, levels of corruption and other factors in good governance.

Europe and North America, including the U.S. (19) dominated the top ranks, while Chile (25), Uruguay (32), and Costa Rica (36) placed highest among developing nations. At the opposite end, the DRC was rated lowest, preceded by Chad, Yemen, Central African Republic, Nigeria, Cote d’Ivoire, Uzbekistan, and Pakistan.

The study found a strong correlation between countries that score well on both indices.