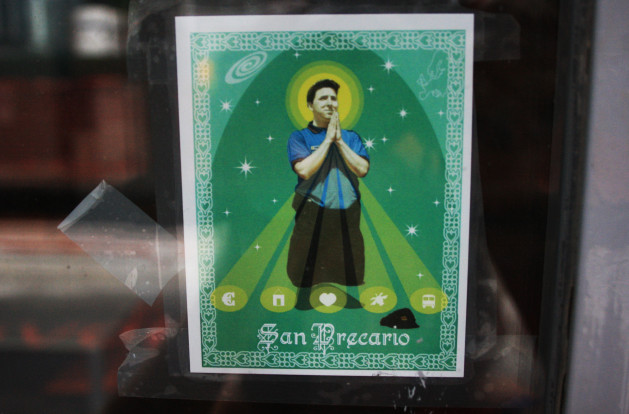 A portrait of San Precario at the movement's office in Milan. Credit: Silvia Giannelli/IPS

The idea of “precarity” was coined by the No Global movement in Italy back in 2001 to define the condition of a new generation of workers who have no option but to take up short-term and unstable jobs. Now, with unemployment skyrocketing across Europe, the quest for better working conditions and a common European strategy to tackle precarious work seems further than ever.

“When we started to talk about it, the political class and the trade unions considered precarity a transitory condition, not destined to become chronic,” Alessandro Marca from the San Precario movement told IPS. “The crisis proved them wrong. The youth that were precarious back then are still precarious, they are simply not young any more.”

San Precario (Saint Precarious), who was declared patron of all precarious workers, is an iconic image created to recall Catholic saints believed to protect the faithful. The “saint” made his first appearance in October 2004 during protests against multinational chains “but the group that created him was active since 2001, when we organised the first May Day parade,” said Marca.

"The youth that were precarious back then are still precarious, they are simply not young any more.”

Transnational mobilisation such as the anti-G8 demonstrations and the European Social Forums allowed many grassroots movements to connect and raise cross-border initiatives. The world of precarious workers was one of the concerns taken up. In 2004, May Day in Milan became the Euro May Day Parade.

The international connections did not last more than a couple of years. “For a certain period there was a network of different groups around Europe, a mailing list, an organisational structure, a common manifesto and a common platform for calling demonstrations,” said Marca. Now there is still May Day, and it has been used by the Occupy movement in the U.S., but “there isn’t a direct connection any more, the contents and modalities of each May Day are totally independent and based on the local territory.”

According to Sandro Gobetti, president of the Italian Basic Income Network (BIN), the gap among European Union welfare systems could be one reason behind the failure of an international movement of precarious workers.

“In many European countries people already have access to unemployment subsidies and to minimum income,” he told IPS. “In this sense, Italy represents an anomaly. Millions of precarious workers have no rights, no maternity leave, no paid holidays, not to mention unemployment subsidies. The Italian movements are stronger here because there is more need for them to exist.”

“The main problem with precarity is that workers are liable to be blackmailed, and we believe that the introduction of a minimum income is the only real solution to it,” Marca told IPS. “We are aware that the current production system needs flexibility; what we say is that this flexibility has to be adequately remunerated.”

BIN has been campaigning along with another 170 associations to collect signatures for proposed legislation on minimum income in Italy.

The pioneers of the first European precarious network decided to go back to the national level, but others are still looking at the broader picture. Stanislas Jourdan, French activist from the Unconditional Basic Income (UBI) network, is pursuing a European project.

“The European Citizens Initiative (ECI) is a tool that enables citizens to speak out,” Jourdan told IPS. As the European Commission site explains, the ECI allows citizens, upon the collection of one million signatures from at least seven out of the 28 member states, to participate directly in the development of EU policies by calling on the European Commission to make a legislative proposal.

The UBI aim is to pressure Brussels to adopt a unified basic income system for all EU citizens, regardless of their working and financial situation. “Everyone would get a basic income, which is universal, unconditional, attached to the individual rather than the household, and high enough to ensure basic needs and for participation in society,” Jourdan told IPS.

Such benefits would replace the current measures already in place in many countries by creating a unified and more efficient system. “What we aim at…is to simplify the system, make it much more fair and understandable for everyone, and dismantle the problem with the current welfare system in Europe.”

Skeptics inevitably pose the problem of financial backing for such measures. Jourdan said the proposed basic income would be fairly low and would serve only as base that each member state should top up with their own resources.

Gobetti, who is lobbying the Italian parliament to adopt a minimum income system similar to that already in place in most European countries, said it is only a matter of political will. “You never get the question of where do we get the money for military expenses. Where do we get that money? The education system is also very expensive, but one would never think of abolishing it.”

According to Marca, initiatives like the ECI are welcome because they create awareness around the issue, but there is a need to be realistic. “When we started we also discussed the idea of an unconditional basic income for everybody. In ideal conditions we would agree, but nowadays establishing a poverty threshold to access benefits seems more realistic.”

Marca also sees other problems with such international efforts. Looking back at the Euro May Day experience, he said: “The reason behind the end of that project was the lack of a European interlocutor. Eventually we always had to go back to the national level. With the crisis we have only witnessed the negative side of a strengthening European governance, but there is still no one ready to listen to civil society’s requests in Brussels.”