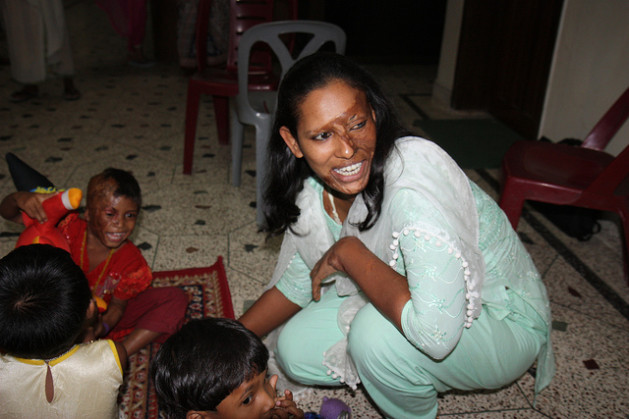 KOLKATA, India, Jul 16 2013 (IPS) - Preeti Rathi was just 25 years old when she passed away in a Mumbai hospital exactly a month after a man threw acid on her while she stood waiting on a railway platform.

Rathi had travelled from India’s capital, New Delhi, to work as a nurse at INHS Ashwini, the naval hospital in south Mumbai. Despite closed-circuit television footage of the railway platform on which the attack took place, and massive protests launched by her family and activists, her assailant still remains at large.

Rathi’s is not an isolated case. The last few years have seen hundreds of Indian women and girls in cities across the country become the victims of acid attacks.

Those who succumb to their injuries invariably die a painful death – acid eats into the skin, resulting in wounds that quickly become infected and cause septicaemia and other fatal conditions.

Survivors, meanwhile, end up with scars that often last a lifetime, and many live out their days hiding what many described to IPS as their “deformed” faces and bodies from horrified gazes.

Though there is a dearth of official data on the issue, reports conducted by independent researchers and rights groups show that acid attacks are a gendered crime, with young women being the primary targets.

The attackers, more often than not, are men whose romantic overtures were spurned.

In India, a largely patriarchal society that is on the cusp between conservatism and modernism – and where the aspirations of young girls and women to secure an education and find employment are supported by national economic development plans – hundreds of men feel slighted by women’s newfound independence.

Unable to bear what they perceive as an insult to their “masculinity”, many seek revenge by physically harming women, in an attempt to reclaim their authority.

Eighteen-year-old Chanchal Paswan, hailing from the central state of Bihar, has a face that resembles nothing but melted flesh, the result of an attack that was supposedly “provoked” by her protesting against sexual harassment by four men.

Up until now, acid attacks have simply fallen under the general rubric of crimes against women, which numbered 244,270 in 2012 and included such atrocities as rape, dowry death (women killed or driven to suicide by in-laws to extort an increased dowry) and trafficking of women and girls, according to the National Crime Records Bureau (NCRB).

The eastern state of West Bengal accounted for 12.67 percent of these crimes, while its capital, Kolkata, ranked the third most dangerous Indian metropolis for women, behind Delhi and Bangalore. As such, the number of acid attacks in Kolkata is estimated to be higher than in many other cities around this country of 1.2 billion people.

Subhas Chakraborty of the Kolkata-based Acid Survivors Foundation India (ASFI), told IPS the organisation recently moved a Right to Information (RTI) petition with the West Bengal government in order to glean the real number of attacks against women in the state.

“There were only 56 recorded cases, and 77 victims, between 2006 and 2011,” Chakraborty said, adding that the actual number of incidents was likely far greater.

In contrast, a study by the Avon Global Center for Women and Justice at the U.S.-based Cornell Law School found 153 cases of acid violence reported in Indian newspapers from January 2002 to October 2010.

The Campaign and Struggle Against Acid Attacks on Women (CSAAAW), meanwhile, compiled a list of 65 cases in the southern state of Karnataka between 1999 and 2008.

CSAAAW is credited with helping a young woman named Hasina Hussain seek justice after her former employer, Joseph Rodrigues, poured sulphuric acid on her when she quit her job in his company in 1999 at the age of 19. Even with the backing of the NGO, it took the Kolkata High Court seven long years to finally sentence Rodrigues to life imprisonment.

C J Pragya, from the southern city of Bangalore, no longer flinches at the thought of showing her face, once considered beautiful but now covered in scars, in public. Far from hiding from her plight, she launched an organisation known as stopacidattacks.org, a platform from which she is running a major anti-acid attack campaign.

Activists often cite the example of neighbouring Bangladesh, where acid attacks on women – which numbered 2,500 in the decade between 1999 and 2009 – came down drastically following the regulation of acid sales.

According to a 2011 report by the Avon Global Center for Women and Justice, attacks have fallen by almost 20 percent each year since the enactment in 2002 of the Acid Control Act and the Acid Crime Prevention Act, which restricted the import and sale of acid in open markets.

Preventive measures include locking up shops in order to prevent the sale of acid, banning vehicles suspected of carrying acid and suspending acid selling licences. If found guilty, perpetrators face a fine of up to 1,200 dollars, or, in more serious cases, capital punishment.

Still, even in Bangladesh, implementation of laws remains weak. “The conviction rate is less than 10 percent, as most of the perpetrators are more powerful than the victims (or) survivors,” says Sultana Kamal, executive director of the human rights organisation Ain o Salish Kendra.

While recognising the value of such individual efforts, many also acknowledge that, absent action at the national level, acid attacks will continue.

For years, activists have been demanding that existing laws be strengthened and acid attacks given their due attention by government agencies.

Seven years ago, the Supreme Court suggested that the government draft a “complete and comprehensive” law to tackle this menace, according to Chakraborty.

But it took the brutal gang rape of a young medical student on a moving bus in the middle of New Delhi on Dec. 16, 2012, and the ensuing wave of protests, to finally push the government to fast track passage of the Criminal Law Amendment Act in April 2013.

The reform ushered in sweeping changes to laws that claim to protect women against violence, and made provision for harsh punitive measures against those who violate women’s rights.

Acid attacks quickly came under the ambit of the new law, which itself resides under the Indian Penal Code (IPC 326 A&B).

Punishment for acid attacks now includes a minimum of 10 years’ imprisonment, extendable to a life term, while “conviction on voluntarily throwing or attempting to throw acid with the intention of causing damage will incur a penalty of five to seven years,” with a fine that could go up to roughly 16,600 dollars, according to the text of the amended Act.

The fine will be used to pay for the extensive surgical procedures necessary for facial reconstruction. Sonali Mukherjee, a young girl from the eastern Indian city of Dhanbad, for instance, has had to undergo 22 operations since she was attacked in 2003, according to Chakraborty.

Still, money alone will not compensate the families for the long-term trauma of acid attacks. Rehabilitation remains a major problem for survivors, with many poor families unable to afford the extended treatment required for a full psychological recovery.

The Punjab and Haryana High Court recently directed the Punjab government to formulate a policy that would facilitate free treatment, including counselling, for acid attack survivors.

While rights activists welcomed the IPC 326 provisions, they are disappointed that the amended law makes no mention of restrictions on acid sales, drawing attention to the fact that a bottle of sulphuric, hydrochloric or nitric acid can be obtained for as little as 30 rupees (half a dollar) from almost any corner store.

Supreme Court Lawyer Kamlesh Jain told IPS that the law would not make a difference until this fundamental problem was addressed.

Bhat was representing Laxmi, a victim who ended up scarred for life after a spurned lover flung acid in her face. Bhat contended that the absence of a comprehensive regulatory mechanism made the corrosive substance easily attainable by the assailant, a claim that has found echo among social researchers who blame the large number of attacks on the cheap price of the weapon.

On Jul. 9, the Supreme Court of India warned that it would ban the sale of acid unless the central and state governments immediately regulated its supply.