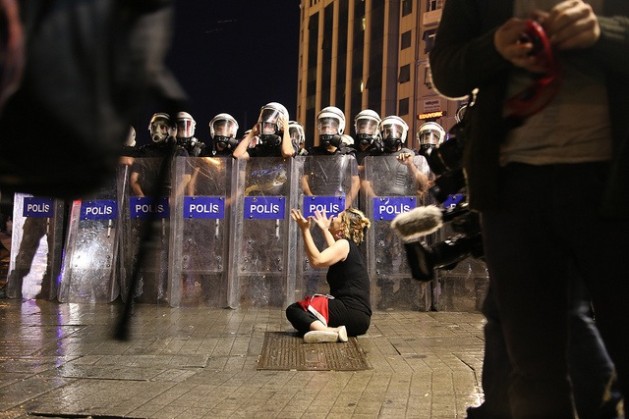 A woman collapses in front of a police barricade during one of the Occupy Gezi protests. Credit: Arzu Geybulla/IPS

ISTANBUL, Jul 13 2013 (IPS) - Among the many issues bringing protestors together at Gezi Park, the now-iconic site of struggle in Istanbul’s Taksim Square, is the demand for women’s liberation.

Coming from many walks of life and expressing a myriad of ideals and values, the women of the Occupy Gezi Movement have nevertheless voiced a collective desire: to fight the undercurrent of deeply entrenched patriarchal values and reclaim autonomy over their own bodies and lifestyles.

These demands are now coalescing around proposed legislation from the country’s Health Ministry that will call on pharmacies to limit the sale of oral contraception known as the morning-after pill only to those with a doctor’s prescription, a practice that is uncommon for most drugs available to the public here.

Feminists and women’s rights groups representing almost 400 people say the new legislation is part of government attempts to impose traditional values onto their lifestyle, and will only reinforce stereotypes about the “ideal” Turkish woman, while stigmatising those who stray from this image.

“I can’t go to the family doctor (for my contraceptive needs) because it is a secretive issue for me,” said Merve Kosar, a 26-year-old Istanbulite who relies on the pharmacy to replenish her supply of the drug.

In Turkey, most non-narcotic drugs are available for purchase over the counter. Insisting on a prescription from a family doctor, who can report to other members of the family, places added pressure on women to conform to conservative mores.

Women like Kosar, who make the conscious decision to have sex before marriage, are worried about having fewer options to guard against unwanted pregnancies.

Nearly 34 percent of once-married and currently married women said they use morning-after pills as their main form of contraception, according to the 2008 Turkey Demographic and Health Survey.

Still, the possibility of parliament passing the bill under a larger package of reforms sometime this year seems likely and concerns women’s rights groups who say the announcement will hinder some from asking pharmacies for pills.

An article in the Hurriyet Daily News cited a notice from the Health Ministry, which stated that “growth hormones, antibiotics, antidepressants, and antihistamines” must be sold with a doctor’s prescription to reduce the misuse of drugs.

According to Zerrin Guker, a pharmacist in the commercial neighbourhood of Karakoy who sells 15 to 20 boxes of the morning-after pill per month, some customers have been misusing the drug by purchasing it a few times per week, which can cause hormonal side effects.

A 27-year-old protestor named Elif, who declined to give her last name for fear of retribution, said she suffered blood clots and nausea after taking the pill once; yet she still believes in a woman’s right to choose and says the government’s proposed restriction is designed to prevent unmarried women from having sexual relationships.

“Most women can’t even buy tampons or feminine products from stores because they are ashamed,” she told IPS, stressing that the culture of shame has become entrenched in society.

A long fight to overturn these attitudes is slowly showing results: ideals about abstinence until marriage, for instance, are shrinking, as women continue to speak out about their grievances with men including harassment and sexist swearing, practices that have infiltrated the Occupy Gezi Movement.

At a recent meeting in Yogurtçu Park in Istanbul’s Kadikoy district, more than 100 women gathered to discuss their experiences at Gezi Park.

One protestor said a drunken man grabbed her buttocks one night, while bystanders justified his actions saying he had been under the influence.

Another woman read out a list of complaints with the governing party, which included attempts to get rid of “dekolte” (low-cut dresses) and state attempts to ban abortions and “keep women at home.”

A year ago, Prime Minister Recep Tayyip Erdogan called for tighter restrictions on reproductive health by drafting a bill that would shorten the time period in which women can have an abortion from 10 weeks to eight weeks.

“There is no difference between killing the foetus in a mother’s womb or killing a person after birth,” Erdogan said in a speech before female politicians in the capital, Ankara, last year.

His words drew the ire of around 3,000 to 4,000 protestors, mostly women, who marched against the anti-abortion law in Kadikoy last June, waving banners proclaiming statements such as: “It is my body, so who are you?”

When abortion became legal in 1983, the Turkish Population and Health Survey found that 37 percent of once-married Turkish women had at least one abortion. As of 2008, that figure stood at 14.8 abortions per 1,000 women.

While the latest call to limit oral contraception has yet to spark demonstrations, many believe it will eventually ignite the tensions that have been simmering for years now.

Ayse Dunkan, journalist and activist, believes the outcry will pick up momentum, with more people rebelling against the “conservative concept (that) women (must) stay home and raise children.”

Such ideals, she told IPS, have resulted in Turkey having the world’s second highest population growth rate after China.

Selime Buyukgoze, a volunteer at Mor Cati, an Istanbul-based network for battered women, called the proposal “problematic” since the morning-after pill must be taken within 72 hours of having unprotected sex and few women will be able to reach their doctors that soon.

Like most others, though, her biggest fear is that doctors will break a woman’s confidence by reporting her lifestyle to the family.

Ahmet Kaya, a family doctor who sees almost 150 patients a week, rebukes that claim. “If your patient doesn’t want you to inform her family, you can’t make that call,” he told IPS.

At the moment, pharmacies are continuing to sell the pill without asking for a prescription

It remains to be seen whether or not the government will push ahead with the law, or whether it will respond to the will of more than 1.5 million female protesters.