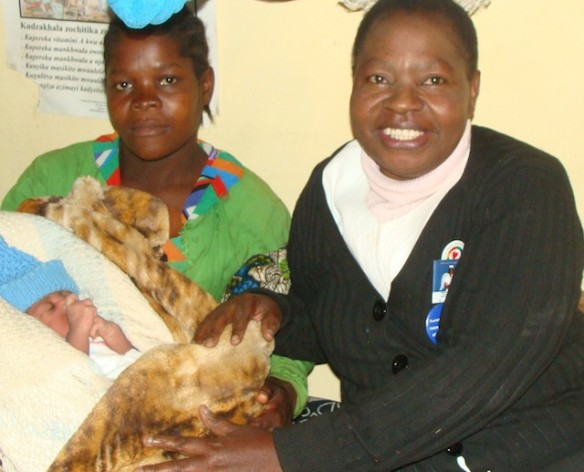 In Malawi, 16 women die every day of pregnancy-related complications. But Charity Salima says that she is yet to record a single pregnancy-related death at her clinic in Area 23, a township on the outskirts of Malawi’s capital, Lilongwe. Courtesy: Mabvuto Banda

LILONGWE, Jul 3 2013 (IPS) - Charity Salima, 54, has helped to deliver over 4,000 babies in her maternity clinic in Area 23 – one of Malawi’s poorest and most populous townships – and has yet to record a single pregnancy-related death.

In Malawi, the lifetime risk of a woman dying in pregnancy or childbirth is one in 36, compared to one in 4,600 in the United Kingdom, according to the Malawi Safe Motherhood Programme, an initiative to reduce maternal mortality in this southern African nation.

“I used to witness pregnant women scramble for public transport or hitchhike for a lift just to reach a hospital. In most cases, some would die or lose their babies or develop post-delivery complications that could have been avoided if they had transport and got timely medical help,” Salima tells IPS.

Salima used to work as a research nurse. But in 2008 she quit her job to set up her clinic, Achikondi Women Community Friendly Services, in a rented house near Malawi’s capital, Lilongwe. And thanks to the help of the National Organisation of Nurses, a solidarity fund for retired nurses and midwives, which donated an ambulance to her clinic, she has been saving lives ever since.

The Ministry of Health puts it simply: 16 women die every day in Malawi from preventable pregnancy-related complications. The country is behind on delivering two of the key United Nations Millennium Development Goals (MDGs) – reducing maternal deaths by 75 percent by 2015, and ensuring universal access to reproductive healthcare. Eight MDGs were adopted by all U.N. member states in 2000, and aim to curb poverty, disease and gender inequality by 2015.

But Salima’s clinic and her maternal health success rate here may prove a model for Malawi as the country grapples with saving the lives of its pregnant mothers.

Martin Msukwa, executive director for the MaiKhanda Trust, an NGO focusing on reducing maternal mortality here, tells IPS: “Salima has managed to make a difference in her community because she has done two things; introduced an efficient system to deal with normal deliveries at her clinic and managed to have another efficient system of referring complicated cases to hospital on time.”

Her methods to combat maternal mortality are simple and low cost. She encourages women to grow vegetable gardens to increase the diversity in their diet, and she registers every pregnant woman in the community so that she can monitor their pregnancy.

Her strategies, she says, have helped her identify high-risk pregnant women within the community, who in turn are referred to the main hospital in Lilongwe for treatment.

“The other thing we have been doing is to change cultural beliefs in our community that play a major role in maternal deaths, like the belief that if a woman has obstructed labour, it’s a sign of infidelity,” she says.

Salima offers a complete range of other services at the clinic, including outpatient services for children under five. Her clinic, however, is not for free. Patients pay a fee of about three dollars to help cover the cost of medicines from the government’s central medical stores.

The Malawi Safe Motherhood Programme is trying to replicate some of the practices in Salima’s clinic.

“From an advocacy point of view, we have taken on board initiatives such as Salima’s in our programmes and we are mobilising resources to build waiting homes for pregnant women who live far from health facilities,” says Ngoma.

In addition, the programme has recruited 200 young women from 20 districts across the country for an 18-month midwife-training programme. Upon graduation, the midwives will work for their respective communities for five years.

But as word of Salima’s success spreads, it brings with it challenges too.

“I have more and more people coming to my clinic but I don’t have enough volunteers with the needed skills to meet the demand,” Salima says.