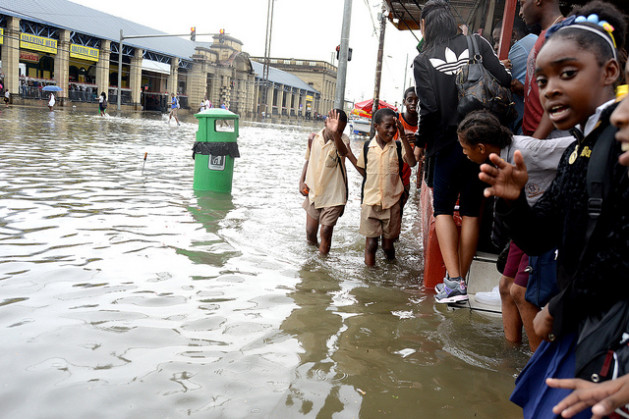 Flooding in Trinidad's capital of Port of Spain in May 2013 left residents little choice but to wade through the deluge. Credit: Peter Richards/IPS

PORT OF SPAIN, Trinidad, Aug 19 2013 (IPS) - The Caribbean is in danger of becoming “a region of serial defaulters” with respect to international debt obligations, according to one expert, and this may partly be due to its economies suffering frequent shocks from natural disasters.

Caribbean nations are among the world’s most vulnerable to natural disasters, with the region being struck by 187 such disasters in the past 60 years.

According to an International Monetary Fund study entitled “Caribbean Small States: Challenges of High Debt and Low Growth” and published in February, “The effects of natural disasters on [the region’s] growth and debt are also significant,” and “many Caribbean economies face high and rising debt to GDP ratios that jeopardize prospects for medium-term debt sustainability and growth.”

Commenting on the region’s restructuring of loans after some countries had defaulted on bond payments, a Bloomberg news report quoted an expert in international finance from American University who claimed Caribbean governments find it easier to default on bond payments than to reduce their spending.

Over the past three years, a number of Caribbean countries have restructured bond payments, making this period one of the highest for defaults on loan agreements by Caribbean governments. The Bloomberg report cited Grenada, Jamaica and Belize as three of the Caribbean countries restructuring debt obligations.

However, Michael Hendrickson, an economic affairs officer with the Economic Commission for Latin America and the Caribbean (ECLAC), emphasised the pressures brought by natural disasters on these countries’ economies over the past decade.

“In Grenada, GDP contracted largely due to the fallout from Hurricane Ivan, the growth rate declined from 9.5 percent in 2003 (before Ivan) to -0.7 percent in 2004 (year of Ivan) then recovered strongly in 2005, with growth of 13.3 percent, no doubt related to strong reconstruction, i.e. investment, but declined again in 2006, after the investment had run its course.

“Jamaica also felt the impact of Ivan and its growth rate slowed from 3.7 percent in 2003 to 1.3 percent in 2004 [the year Ivan struck the island]. This reflected the impact on productive sectors such as agriculture, mining and tourism.

“Moreover, the impacts lingered into 2005, when the economy grew by only 0.9 percent. In Belize, growth slowed to 1.1 percent in 2007 from 5.1 percent in 2006, partly as a result of the impact of Hurricane Dean, owing to damage to agriculture and productive infrastructure,” he told IPS.

Some Caribbean countries “have debt levels that can be considered unsustainable”, Hendrickson said. “Moreover, debt service payments, namely, interest and principal repayments, absorbed a full 29 percent of government revenue in 2011.

“We are still collating numbers for 2012. This reduces the ability of governments to finance public investment and social protection programmes.”

The 2013 IMF study noted that “part of the build-up can be traced to the cost of natural disasters, successive years of fiscal deficit, public enterprise borrowing and off-balance-sheet spending, including for financial sector bailouts.”

An IMF working paper entitled “Macroeconomic Implications of Natural Disasters in the Caribbean” observes that following natural disasters in the Eastern Caribbean region, “the tendency appears to have been a marked increase in expenditure and a small reduction in total revenue (including grants) despite an increase in inflows of official assistance and aid.”

The working paper said this “is not surprising, as governments and households would be expected to borrow in response to temporary shocks.”

Since natural disasters affect two of the largest economic sectors in the region, tourism and agriculture, the impact on countries’ economic growth is considerable.

According to ECLAC’s “The Economics of Climate Change in the Caribbean Summary Report,” it is estimated that natural disasters due to climate change will likely cost countries in the subregion up to five percent of annual GDP between 2011 and 2050.

It is also estimated that GDP in the region has declined by about one percent annually over the past several years because of natural disasters.

However, because of their middle income status, the majority of the region is unable to benefit from international debt relief, says the 2013 IMF study on Caribbean debt. The study also noted that “only a few Caribbean countries still qualify for concessional borrowing at the World Bank.”

“Given the exceptionally high costs of natural disasters, small states in the Caribbean should be seen as frontline candidates for support from climate-change funding,” the IMF report stated.

The president of the Caribbean Development Bank (CDB), Dr. Warren Smith, also stated a case for increased insurance coverage to help offset the impact of natural disasters due to climate change, at a recent meeting of the CDB’s governors.

He made specific reference to the region’s need to make greater use of the Caribbean Catastrophe Risk Insurance Facility (CCRIF), an organisation set up to insure Caribbean countries against natural disasters.

Dr. Simon Young, who heads Caribbean Risk Managers Ltd., which supervises most of the technical aspects of CCRIF, said 16 countries in the region have policies with CCRIF.

“Those policies cover hurricane and earthquake and the total amount of risk that is covered amounts to just over 600 million” for all 16 countries, he told IPS.

Dr. Young conceded, “It is not adequate, but the adequacy of the coverage is a function of the countries’ ability to pay premiums that would be needed to buy adequate coverage. CCRIF provides premiums at less than half of what the commercial market would require.”

Yet, many countries find it difficult to pay for coverage even at those preferential rates. As a result, the insurance coverage has provided only “a very small amount” of compensation to islands hit by natural disasters in recent years.

Dr. Young added that insurance coverage should not be seen as a “silver bullet” for disaster risk reduction.

“Caribbean countries need to look for cost efficient ways to manage disaster risk reduction,” he said, and CCRIF provides just one tool for doing so.