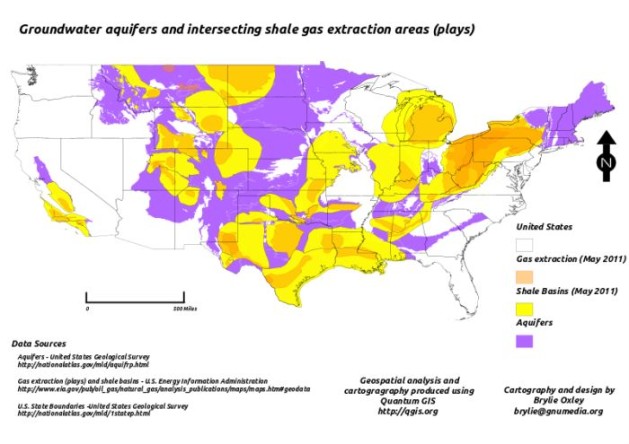 WASHINGTON, Aug 7 2013 (IPS) - New signs have emerged in recent days which indicate that extreme measures are being taken in order to suppress evidence of the pernicious effects of the energy extraction method known as hydraulic fracturing, or “fracking”.

At the beginning of this month, the Pittsburgh Post-Gazette revealed that, in 2011, a Pennsylvania family reached an unprecedented settlement with an energy company fracking near their property. It included gag orders on the family’s two children, ages seven and 10 at the time of the settlement, which prohibit them from, at any point in their lives, discussing their experiences living near a fracking site.

“Advertising and lobbying are deployed by the energy companies to confuse the public, and meanwhile anyone who has suffered from their practices gets a muzzle.” -- Steve Horn of DeSmog Blog

This revelation came only days after the Los Angeles Times reported that it had obtained a set of government-censored Powerpoint slides related to a study by the Environmental Protection Agency. The slides conclude that fracking was indeed polluting the aquifer in question.

Critics of the controversial extraction method note that these examples are part of an overall cover-up strategy being employed by the oil and gas industry.

“The industry uses its influence in DC to shut down studies by the EPA, while simultaneously using the legal system as a weapon to silence its victims,” Brendan Demelle, executive director of DeSmog Blog, the organisation which obtained the Powerpoint slides and made them public, told IPS.

The concluding slide states that “[m]ethane is is at significantly higher concentrations in the aquifers after gas drilling.” Further, it asserts this methane, along with other gases released during extraction “apparently cause[s] significant damage to the water quality” of surrounding aquifers.

Dispersed methane is the most notorious pollutant associated with fracking. It is a colourless and odourless gas which, when concentrated highly enough, can spoil water sources, and in some cases make them flammable.

According to critics, the pernicious effects of fracking are being obfuscated by powerful companies who profit from popular ignorance.

“Advertising and lobbying are deployed by the energy companies to confuse the public, and meanwhile anyone who has suffered from their practices gets a muzzle,” Steve Horn, a research fellow at DeSmog Blog, told IPS.

“They use every avenue of our broken democracy to their advantage,” Horn added, referring to the energy companies.

The DeSmog Blog activists agree that power and wealth allow the fossil fuel industry to “call the shots” when it comes to fracking.

They note that because of this advantage companies can afford “endless legal fees”, a luxury which is out of reach for ordinary citizens who may want to challenge them in court.

“It is rare for cases to reach the stage of a full-blown trial. Normally families and individuals wind up settling for less than what they want, because the alternative would be much worse for them,” says DeMelle.

In the case of the Hallowich family, whose children are prohibited for the rest of their lives from uttering certain “illegal words” related to fracking, the sum of the settlement was 750,000 dollars.

For anti-fracking activists, the Hallowich case is only “the tip of the iceberg”.

“The muzzling of a seven-year-old is just an egregious example of the systematic corruption which the oil industry has spent years orchestrating,” Horn told IPS.

Fossil fuel companies, according to DeSmog Blog, have gone as far as to hire military specialists with expertise in psychological warfare to deal with residents who try to resist nearby fracking.

Horn says he attended a conference in Texas where one energy company spokesperson admitted to this, saying “we are dealing with an insurgency” and recommending industry members read the U.S. Army’s field manual on counterinsurgency.

“Rather than taking responsible steps to address community concerns about the inherent risks of fracking,” says DeMelle, “the industry is taking an adversarial approach, treating concerned citizens as an ‘insurgency’ and using military warfare tactics and personnel to intimidate U.S. citizens in their own backyards.

“It’s unethical, despicable behaviour, and Congress should investigate whether the oil industry is in violation of federal law,” he added in a statement given to IPS.

Other cases of the industry suppressing government studies of fracking effects include one which took place in a suburb of Fort Worth, Texas. There, an emergency order was issued by the EPA after a man complained of his water supply bubbling, only to be rescinded a year later after the oil company involved threatened the agency.

In the end, no government action was taken, and the man who complained was left to pay a thousand dollars per month to have access to clean water.

Another EPA study conducted in Wyoming connected fracking to water contamination, but again industry manipulation led to no further action being taken, despite some of the contamination being carcinogenic.

The EPA was originally slated to release a comprehensive study on the effects of hydraulic fracturing in 2014. The deadline for that report, however, has been pushed back to 2016.