MEXICO CITY, Sep 2 2013 (IPS) - “No one can stop me from working for migrants’ rights, because no one is above my own conscience,” said Mexican Catholic priest Alejandro Solalinde.

Solalinde, one of the most dauntless activists for the rights of undocumented Central American migrants who cross Mexico en route to the United States, was referring to new changes imposed by the Catholic Church leadership. 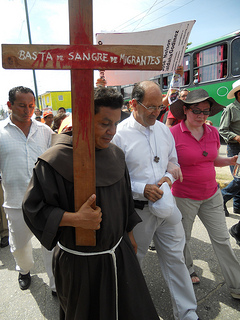 Catholic priest Alejandro Solalinde (wearing a white shirt, to the right of the cross) leading a 2011 march for migrant rights. Credit: Emilio Godoy/IPS

“There has been no support for our work,” he told IPS. “The pastoral structure is being dismantled and everything is going to be directed from above, by the bishops.

“It’s a top-down ecclesiastical project,” complained the parish priest, founder of the “Hermanos en el camino” (Brothers on the Road) shelter in the city of Ixtepec, in the impoverished southern state of Oaxaca, which assists hundreds of Central American migrants a month.

Solalinde said that while “there was a great need for involvement by the bishops, the danger now is that pastoral work will be disregarded.”

The changes were announced at the 13th national workshop of the Pastoral Dimension for Human Mobility (DPMH), held Aug. 26-29 in the northern city of Monterrey.

Pastoral work with migrants will now be coordinated by each bishop in Mexico’s 32 dioceses, in contrast with the previous arrangement where a coordinator on the ground was responsible for oversight.

There are 54 shelters at strategic points along the route followed by migrants mainly hitching hazardous rides on top of freight trains. One of these shelters is run by lay civil society organisations and the other 53 by the DPMH, belonging to the Episcopal Social Pastoral Commission which comes under the Mexican bishops’ conference.

The DPMH has a total of 108 pastoral action groups, 63 of which include shelters, soup kitchens, health and education programmes, and six human rights centres, according to its report for 2006-2012.

The pastoral action groups, made up of laypeople, priests and members of religious orders, with the support of volunteers, provide assistance to migrants and their families and communities. The changes that are being introduced will complicate their organisation, which will be subject to the views of each diocese.

But with or without support, “we will carry on,” said Tomás González, the director of “La 72”, a shelter in the city of Tenosique in the southeastern state of Tabasco, on one of the main routes for undocumented migrants.

The Franciscan friar and his team have received death threats for their work with migrants, and in 2011 the state National Human Rights Commission issued precautionary measures to protect them.

Each year an estimated 170,000 Central Americans enter Mexico from the south and cross the country heading north towards the United States, according to projections by Mexico’s migration authorities and experts like Jorge Schiavon at the Centre for Research and Teaching in Economics (CIDE).

Along that 5,000-km route migrants are exposed to kidnapping, robbery, extortion, rape and murder at the hands of criminal organisations with the connivance of corrupt police and migration officials, migrants and activists report.

“It’s ridiculous, because migrant rights activists don’t do this as a hobby,” Leticia Calderón, head of political and economic sociology at the state José María Luis Mora Research Institute, told IPS. “Activists exist because they are needed. If not, who will protect (migrants’) rights?”

At the shelters, undocumented migrants are provided with food, a bed, clean clothes, washing facilities, medical attention and practical advice on keeping safe. The shelters survive mainly on donations of clothes, food and medicines.

They are also concerned about harassment faced by the shelters. The Casa del Migrante San Juan Diego, in the town of Tultitlán on the outskirts of the capital, was forced to close in July 2012, as a result of pressure from local residents. The shelter then set up a camp under a bridge, near the railroad. But they were driven out of there as well.

The state government finally relocated the migrants to the town of Huehuetoca, 30 km from Tultitlán.

Another disturbing development cited by activists was a June 2013 police raid on the San José Huehuetoca soup kitchen.

In its report for 2006-2012, titled “La comunión en la misión: inclusión de los excluidos en el escenario actual de violencia en el país” (Communion in mission: Inclusion of the excluded in the current scenario of violence in the country), the DPMH underlines “the lack of awareness in many parishes, which are not familiar with our pastoral work and consider it to be mere social activism, bearing little relationship to evangelism.”

The report says only some of the pastoral action groups create appropriate and realistic plans for priority activities and the necessary resources to carry them out. It also says they lack staff and have only intermittent access to funding and other resources.

Only some of them make regular reports of their activities, mainly on the people they serve and the services they offer, and there are shortcomings in obtaining and recording information and keeping it secure, according to the report.

“Communication between the pastoral action groups is not consistent; the majority of them do not have knowledge about the location or activities of the other groups. The growth of the groups is neither similar nor systematic. Other pastoral groups in the parishes and other dioceses could be involved,” says the report, which may have given rise to the changes announced at the DPMH workshop.

Neither the harassment of migrant rights activists nor the troubles affecting undocumented migrants have ceased. This year, the organisations documented at least seven incidents such as attacks and police raids on shelters in several parts of Mexico.

And on Aug. 25 a freight train was derailed in Tabasco, leaving 11 migrants dead and at least 18 injured. There have been at least four accidents along this railway line since 2012.

“Laypeople, both men and women, have been involved (in the pastoral action groups),” Solalinde said. “Now it will not be so easy for them to participate. Life grows from the ground up; things look very different from above, but they have to be solved on the ground. The Church is afraid of change.”

Solalinde will be travelling to Europe in October, and will take a letter to Pope Francis from families of migrants who have gone missing in Mexico, asking for help finding their sons and daughters. He is taking another letter from “church people” calling for major changes in church structures.