Q&A: “The Last Great Exploration Is to Survive on Earth” 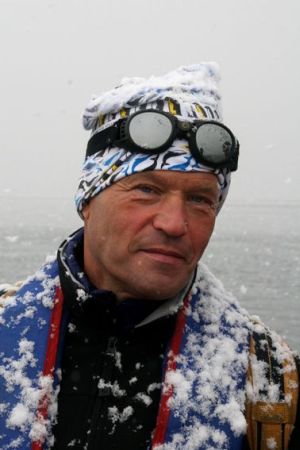 Robert Swan in Antarctica. Courtesy of the explorer.

Cousteau asked him to preserve the Antarctic, as the “last great wilderness on earth”, from likely drilling and mining that could begin in 2041, which is the year the Protocol on Environmental Protection to the Antarctic Treaty will be up for review and possible amendment.  If the treaty is altered, one of the most pristine parts of the world would likely be forever changed.

Swan plans to draw attention to this issue through what he calls his “last great exploration”. At age 60, he plans to walk once more to the South Pole, and to do so surviving on renewable energy only.

Swan is no stranger to a tough challenge. In the 1980s he was the first person to walk the North and South Poles. Swan has dedicated his life to drawing attention to climate change, and now he hopes to raise even more awareness through his latest expedition.

His first stop was at the American Renewable Energy Day conference in Colorado, where he addressed renewable energy leaders such as Ted Turner and T. Boone Pickens. Now he is on to the United Nations, where he will speak at TEDx UN Plaza on Sep. 16.

Below are excerpts from his conversation with Anna Shen.

Q. Can you tell me what Jacques Cousteau asked you to do, and about your upcoming expedition?

A.  Jacques Cousteau asked me to preserve Antarctica. His 50-year mission was to preserve a place, and then use renewable energy to save it. And to save it is to think about making it not worthwhile for companies to go to Antarctica to explore it.

We need to look at how we are going to power our planet. If we don’t there will be no world to explore. We are undertaking an expedition in two years time that is a really big challenge, and we will survive in Antarctica on renewable energy, which nobody has done before. We are willing to go back and put renewable energy to the ultimate test. We will not survive on earth unless we start relying on clean energy.  Decisions today are threatening the future of life on earth.

This is a story that begins with walking to the poles to experience the issues -walking across ice caps that are melting, having our faces burnt off due to a hole in the ozone 25 years ago. What was our response to that? We could join Greenpeace and become activists and they do an excellent job. But what could we do that was different?

We could work with industry and business because everyone makes choices about how to spend money.  But let’s inspire people too, especially youth, with social media and our Facebook page.

Q. How does your mission on creating awareness on renewable energy relate to developing countries?

A. When I walked the poles 22 years ago, the whole issue of energy was not in the front of people’s minds. People were not engaged in thinking about energy. Also, energy use in China and India was not ramped up.

I am working in India on renewable energy projects; if we don’t get India and China using clean renewable energy with one billion people [each], we will have a problem. However, I have been dealing for 15 years with countries like India and China, which are far more important to get right than the USA; there are more people in Bombay than in California – there are 30 million people in one city in India.

Q. Thinking about renewable energy is great in theory, but who are the leaders in producing this technology?

A. The U.S. is the most advanced in this area and has the most money. It is brilliant at technology. If somebody has a good idea in America, there is a good chance to make it happen.

Steve Jobs started in a garage in Berkeley. If you have a fantastic idea, you can get it going, and get the financial support to make the technology happen. That is because people are willing to invest; banks and infrastructure support it to make it happen.

Somebody in China or India may have a great idea but then there is not the financial backing to make it happen. They can’t finance it; that is why America has its advantage, and these big people realise that there is money to be made, and a market.

Q. What is missing in the international debate on renewable energy?

A. Science is telling us that we should be doing certain things, but people are not responding to it globally because people are not listening. People are stuck. There are lots of nations out there that are developing and they want what we want, what we have in the West. The international community needs to be much clearer on directions forward. The USA can help the international community by showing better leadership.

A nation like India produces 1.0 to 1.5 tonnes of carbon per person, but in the U.S. the number is 22 tonnes. The people of India say, “How can we make changes when they produce 22 and we produce one? Why can’t we do what we are doing?” The U.S. needs to show personal leadership, that we are making changes, or else the rest of the world won’t take it seriously. Europe also needs to show leadership.