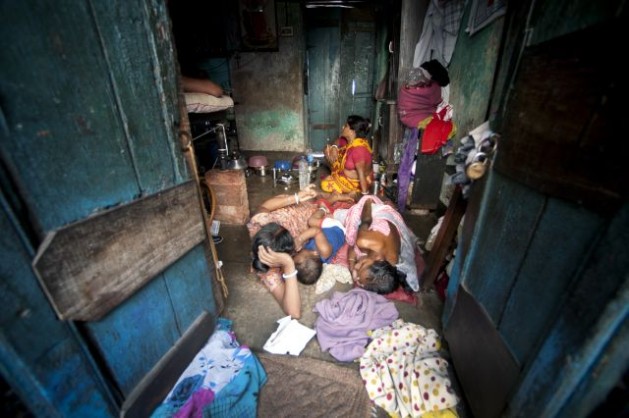 WASHINGTON, Oct 10 2013 (IPS) - Four hundred million children under 13 years of age are living in extreme poverty worldwide, according to a new study released by the World Bank here Thursday.

That total constitutes fully one-third of the 1.2 billion people still living on less than the equivalent of 1.25 dollars a day, according to the report.

“All but three countries in the world have ratified the Convention on the Rights of the Child, which guarantees some access to basic social services for children, including basic social protection,” Jeffrey O’Malley, director of policy and strategy for the U.N. children’s agency UNICEF, told IPS. “The scale of children living in extreme poverty shows how far we are from fulfilling those rights.

“But it’s also important because, beyond the needs and rights of those children, their families, communities, and countries won’t reach their development potential, if the children don’t benefit from adequate food, nutrition, water, health care – all of which are essential to their intellectual and physical development into productive adults,” he said.

Indeed, the report found that half of all people living in absolute poverty in the world’s 35 poorest countries – most of them in sub-Saharan Africa and South Asia – are 12 years old or less.

“Children should not be cruelly condemned to a life without hope, without good education, and without access to quality health care. We must do better for them,” the Bank’s president, Jim Yong Kim, said at a press conference here on the eve of the annual meetings here of the Bank and the International Monetary Fund (IMF).

Later this week, Kim will host a special event with Malala Yousafzai, who was awarded the European Parliament’s Sakharov Prize Thursday and is considered a favourite for winning the 2013 Nobel Peace Prize. He said the 16-year-old Pakistani school girl and education activist was a “powerful symbol of hope” for the 400 million children who remain in extreme poverty.

“She would not be denied,” he said in a reference to her continuing fight for girls’ education before and after the 2012 attempt on her life by Taliban gunmen in Pakistan’s SwatValley and subsequent threats against her after her recovery.

His remarks came as the IMF’s managing director, Christine Lagarde, announced that it had received sufficient authorisation from its membership to transfer profits it made from sales of part of its gold holdings to its Poverty Reduction and Growth Trust (PRGT), a fund to provide no-interest loans to low-income countries.

“We now have secured critical resources to provide adequate levels of financial support to the poorest countries for years to come,” she said.

Eighty percent of the IMF’s member states agreed to transfer their share of the profits to the PRGT which will permit the facility to lend an average of 1.92 billion dollars a year to its clients.

The announcement was hailed by anti-poverty groups who have long campaigned for the IMF to use its gold sales to aid low-income countries. Oxfam called it “great news, especially in these difficult financial times.”

“We’re excited that the profits are going into zero-percent lending, which essentially qualifies as debt relief for some of the poorest countries,” Jubilee USA director Eric LeCompte told IPS.

“That’s money that can go back into social protections for the poorest – most of whom are women and children — in their countries,” he said. “There’s no doubt that even a few billion dollars can go a long way to addressing extreme poverty.”

Since assuming the Bank presidency in July 2012, Kim has repeatedly stressed that the reduction of extreme poverty should be the institution’s top priority. Earlier this year, he set a goal of eliminating extreme poverty by the year 2030, along with promoting greater equity by increasing income growth of the bottom 40 percent of the population in developing countries.

Unveiling a major re-organisation of the Bank Wednesday, he set an interim goal of reducing global poverty levels to nine percent by 2020, which would mean increasing incomes of an additional 510 million people to greater than USD 1.25 a day in real terms.

The new report, entitled “The State of the Poor”, is being billed by the Bank as the first effort to provide an in-depth profile of the world’s poorest people who pose the greatest challenge to meeting those goals.

While reductions in extreme poverty in the developing world between 1981 and 2010 have been remarkable, according to the report, most of the progress has been confined to middle-income countries.

Increasing incomes among the poorest in low-income countries (LICs), on the other hand, has proved far more difficult. Indeed, the number of poor people in LICs actually increased by 103 million during the same period.

Indeed, after India, about one third of whose population lives in absolute poverty, LICs contain most of the world’s poorest — 29 percent in 2010. In 1981, the same countries accounted for only 13 percent of the world’s total, according to the report.

As to who the world’s poorest are, the study found that over 78 percent of the absolute poor in the developing world live in rural areas, a significantly higher percent than the 58 percent of the total developing-country population who are rural-dwellers.

Moreover, 63 percent of the absolute poor work in agriculture, mostly in small-holder farming.

The study also found a gender gap in education among those living in extreme poverty. Poor women aged 15 to 30, on average, have a year less schooling than poor men of the same age group.

But extreme poverty rates were found to be highest among children under 13 – 33 percent in the developing world as a whole and 50 percent in the LICs.

Not surprisingly in that connection, the study also found that the average number of prime-age adults available to provide income and support per child in non-poor households in developing countries was three. That was more than twice the number found in poor households where there was an average of only 1.4 adults per child.