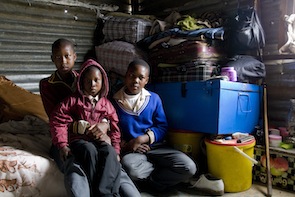 MASERU , Nov 22 2011 (IPS) - Flagging economic fortunes and a persistent AIDS pandemic have devastated Lesotho, leaving little hope it will ever be able to pull itself out of its bleak poverty trap. Three out of five of the tiny southern African kingdom’s children are living in dismal poverty. Every fourth child is orphaned.

As soon as the sun rises, Moliehi* gets up, sweeps the mud floor of her hut, fetches water and cooks breakfast. She wakes up the children, feeds them and sends them to school. But Moliehi is not a parent. Since her mother died three years ago, the 17-year-old orphan became the caretaker of her younger brothers, 9 and 15.

The children live in a tiny, one-roomed shack, roughly hammered together from corrugated tin sheets. Dishes, a couple of pots, a kettle and plastic basin are stacked on a small, rickety table, while tattered suitcases, filled with old clothes and blankets, are stacked against the wall opposite. At night, the siblings squeeze onto a single worn-out mattress.

“I miss my mother. Playing her role is a burden. My brothers look at me to provide, but we have nothing,” explains Moliehi, while her brothers huddle next to her, somewhat at a loss. “I usually go door to door to beg for a cup of maize meal or some oil.”

But the people of Mohasoa, a village half an hour outside of Lesotho’s capital Maseru where Moliehi lives, are equally poor. “Nine out of 10 households here are poverty-stricken. Hardly anyone has employment,” says village chief Malipontso Mokasoa. “Since the beginning of the economic crisis our suffering has increased at an alarming rate.”

The situation of Lesotho’s children is dire. In the country of 1.8 million, a good 500,000 out of 825,000 boys and girls live under 1.25 dollars a day and without proper shelter, according to United Nations Children’s Fund (UNICEF). Almost 40 percent of children under five suffer from chronic malnutrition and are stunted. Both under-five and infant mortality have persistently gone up in the past decade.

“People just aspire to the most basic needs, like food, shelter and clothing. But they can’t even meet those any longer. Some only eat every second day,” knows national Department of Social Welfare child welfare officer Lineo Lephoto. “It’s about bare survival, and we can’t see hope for improvement soon.”

Lesotho has become one of the worst places in the world to be a child. The reason is the devastating impact the global economic crisis has had on this small country the size of Belgium, which is entirely enclosed by South Africa and strongly dependent on its economy.

Declining diamond prices and loss of textile exports leading have weakened Lesotho’s two main industries, while a 60 percent revenue decline from the Southern African Customs Union (SACU) caused largely by the economic crisis dried up the constitutional monarchy’s main revenue stream. GDP growth slowed to 0.9 percent in 2009 from 6.5 percent in 2006, according to World Bank.

Simultaneously, in the countryside, where over 70 percent of Lesotho’s people fight over nine percent of arable land, subsistence farming has diminished. Alternate floods and droughts have reduced farmers’ yields to a bare minimum, leaving more than a quarter of the population food insecure. Lesotho ranks 141 out of 162 countries in the 2011 Human Development Index, behind Benin, Yemen and Bangladesh.

To make matters worse, Lesotho is one of the three countries in the world worst affected by HIV/Aids. Every fourth Basotho is infected with the virus, leaving a quarter of children orphaned. “Lesotho has one of the highest proportions of orphans in the world,” says UNICEF country representative Dr. Ahmed Magan. “The situation is drastic, and at the moment, the deprivation level increases instead of improves.”

The triple threat of HIV, poverty and food insecurity is increasingly exposing children to abuse, exploitation and other human rights violations. “If we don’t manage to reduce poverty in the next five years, we will see a major decrease in children’s survival and development,” warns Magan.

In an attempt to alleviate some of the drastic child poverty, UNICEF, with 29.6 million dollars backing from the European Union (EU), launched in 2008 a grant scheme for orphans and vulnerable children. The programme is implemented by Lesotho’s child welfare department, which allocates 14.8 dollars per month to the poorest homes. So far, the grant supplements the income of 10,200 households, reaching 28,000 children in five of the country’s ten districts.

By 2014, when the funding will be used up, 75,000 children – a fifth of Lesotho’s orphans and vulnerable children – would have benefitted from the grant. From 2015 onwards, government is expected to finance the scheme itself.

How this poverty-stricken country will be able to sustain such a scheme has met widespread scepticism, however. “Government has a long way to go,” admits UNICEF social policy chief Mohammad Farooq. “It tries to maintain its social expenditure, but with all the revenue shortfalls, we will have to see if they can take over in 2015.”

The only way to achieve this is with the help of international donors, like the EU, which already give Lesotho national budget support of more than 134.7 million dollars, he believes.

For children like Moliehe and her brothers, the continuity of the grant will decide their future. Although 14.8 dollars seems to be a rather small amount, the money allows the children to buy food and go to school. Says the teenager: “The grant is the only money we have. Already, it’s not easy for us to survive. I always worry.”