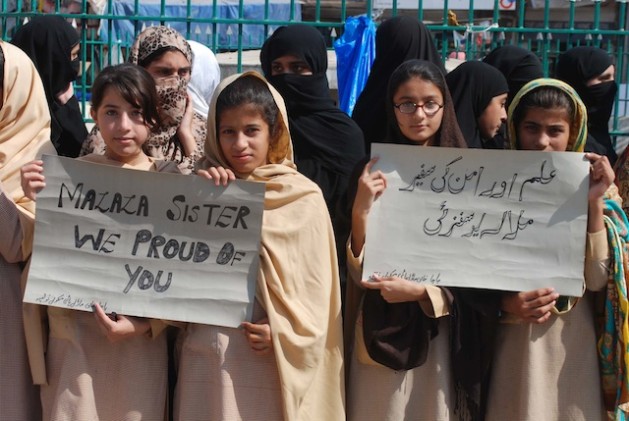 Many more girls are going to school after the attack on Malala Yousafzai a year ago. Credit: Ashfaq Yusufzai/IPS

PESHAWAR, Pakistan, Oct 11 2013 (IPS) - Back in Swat Valley in Pakistan where she comes from, Malala Yousafzai who had been tipped to win the Nobel peace prize this year, has not only left behind more girls in school now than there were a year ago but also large numbers of people who are now distanced – and even hostile – to her.

Spokesman for the Tehrik-e-Taliban Pakistan (TTP) Shahidullah Shahid told IPS from an undisclosed location that “Malala abandoned Islam for secularism.”

The spokesman said it was students of the Jamia Hafsa madrassa in Islamabad who had shown bravery who should be considered for an award. Women students here were involved in a confrontation with government forces in 2007.

The Nobel Peace Prize this year went to the Organisation for the Prohibition of Chemical Weapons (OPCW).

“The Taliban will not lose an opportunity of killing Malala Yousafzai, and those found selling her book will be targeted,” he said. Malala has written a book on her experiences titled “I Am Malala”, co-authored with British journalist Christina Lamb.

“People know she will not return to Swat, and therefore they don’t like Malala.” -- Mushtaq Ali, a jobless computer graduate.

But in a silent response to Taliban threats, the number of girl students at the Khushal Public School that Malala went to has risen.

“In 2009, we had a total of 450 students, which has now reached 700,” Subkhan Shah who teaches at the school told IPS. “Many parents want to educate their daughters.”

Muhammad Atif, minister for elementary education in Khyber Pakhtunkhwa province, told IPS that 660 million dollars would have been spent on education in 2013 in the province. More attention is being given to female education, he said.

“The impact we have recorded after the shooting of Malala Yousafzai is that the urge for education among girls has increased,” Swat-based education officer Mushtari Begum told IPS. “The majority of girls consider her a role model.”

Malala was shot in the head at point-blank range in a school van on Oct. 9 last year. She suffered serious head injuries and was flown to Britain where she underwent four operations.

Malala rose to prominence in 2010 when she was just 12 over a blog on the Urdu site of BBC where she campaigned for education for girls. Malala wrote under a pseudonym but “it was known that Malala was the writer of the blog that had gained worldwide fame,” Zahira Shahid, principal of the Government Girls High School in Mingora in the Swat Valley, told IPS. “Since then, she has become a motivational force for local girls.”

“During those hard times when all politicians and civil society organisations were tightlipped for fear of the Taliban, Malala emerged as a champion of girls’ rights that gave strength to the oppressed women population,” Muhammad Jaffar, from the Pakistan Tehreek Insaf party led by cricketer turned politician Imran Khan, told IPS.

But he said he is taken aback by the resistance to Malala’s emergence on the international scene. “There was no celebration on Oct. 9, the day when Malala was shot, and survived.”

“The local population feels betrayed by Malala,” Ghufran Ali, a teacher at the Degree College in Swat, told IPS. “She abandoned the people of Swat, where the Taliban influence will never go.”

The incident was blown out of proportion by world media because of the interest shown by Western countries, he said.

“Malala and her two friends Shazia Ramzan and Kainat Riaz who suffered injuries in the attack have flown to the U.K. for free education but what about thousands of others who feel at a razor’s edge coming in and out of schools. People would have been jubilant over Malala had she visited local people after her recovery.”

Abdul Hakim, a shopkeeper in the main market in Swat, said that despite the campaign over a Nobel prize for her, “there are no celebrations in Swat or anywhere else in Pakistan, which means the people are not happy with her.”

“People know she will not return to Swat, and therefore they don’t like Malala,” said Mushtaq Ali, a jobless computer graduate.

“The international media has dutifully been promoting Malala because she was wounded in the Taliban attack, but was oblivious to target killings of peace committee members who were killed by the same Taliban,” he said. “Every month 10 to 15 anti-Taliban persons are killed in Swat. Malala and family are enjoying freedom thousands of miles away.”

In December last year, people came out in protest when the government named Swat Degree College after Malala. The protesters said it would put the lives of students at risk. The decision was revoked after a request from Malala.

Some were disappointed that Malala did not win the Nobel. “We have cancelled our celebrations after we heard that Malala didn’t get the prize. However, we are hopeful that she would continue her struggle for promotion of female education in Swat,” Zahid Khan, president of the Swat Teachers Association, told IPS.

Malala’s teacher Fazal Khaliq said the students of Khushal Public School were unhappy over her rejection for the prize. “She is still very young and could get the Nobel next year. Her nomination for the Nobel prize has brought us immense joy,” he said.