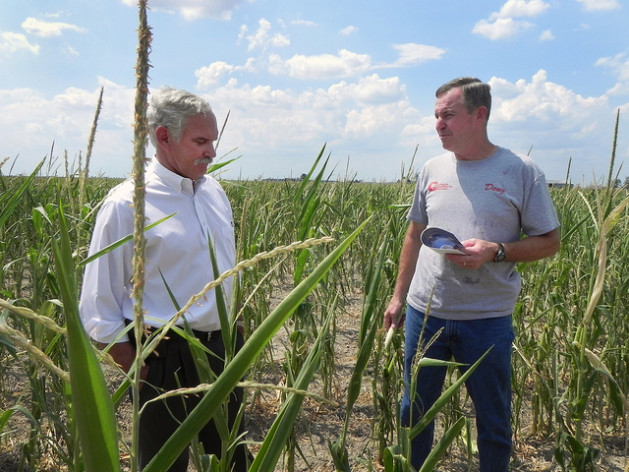 WASHINGTON, Oct 21 2013 (IPS) - As the planet heats up and larger populations demand larger water supplies, the United States will be left high and dry if it fails to address a worsening water shortage.

By 2060, the gap between water supply and demand could grow to nearly four billion cubic metres per year – 10 times the amount of water used by the desert-bound city of Las Vegas.

“If you go to the western U.S., people are still in that mindset of trying to withdraw as much water as they can, as long as they can pump faster than their neighbour." -- Betsy Otto of WRI

“Water shortage has huge ramifications not just for the entire national economy – as farmers, ranchers, cotton producers have to cope with less and less water – but also for the natural system itself,” Adam Freed, the director of the Securing Water Programme at the Nature Conservancy, an environmental organisation here, told IPS. “And climate change is only going to make it worse.”

According to a new trend analysis by scientists in the public and private sectors, U.S. population growth of nearly one percent and rising global temperatures will result in a clear and significant supply-and-demand imbalance.

Dr. Robert Mace, deputy executive administrator of water science and conservation at the Texas Water Development Board, which monitors aquifer levels throughout the state, told IPS that “2011 was both the hottest and driest year on record in Texas. Statewide agricultural losses [across all crops and livestock] that year totaled 7.62 billion dollars, making it the most costly drought in history – more than 3.5 billion dollars higher than the 2006 drought losses, which was the previous costliest drought on record.”

In the future, 16.7 percent of water supplies in the state are projected to come from agricultural irrigation conservation strategies, according to the 2012 State Water Plan.

In Texas and across the United States – as across the world – initiatives addressing water shortages are already emerging. Clean water funds and water efficiency infrastructure in a host of Western cities make clear that the reality of the looming problem has already begun to dawn on some policymakers.

Organisations such as the Nature Conservancy are creating so-called water funds, conservation projects that aim to guarantee a continuous supply of clean water all along the watershed. One way to do that is by encouraging upstream farmers and downstream municipalities to enter into financial agreements with one another, with cities and utilities paying the farmers to “send” them clean and abundant water.

The money helps upstream users finance water restoration and conservation projects. There are currently 15 water funds projects worldwide, including two major projects in the United States, in the often-parched states of New Mexico and Texas. More are on the way.

Thus far, some of the success of these projects comes from the financial incentives for the upstream stakeholders. Farmers realise that securing their water supply is in their long-term interest, as they are less likely to have to import water from somewhere else.

“Finding the balance between conserving our resources while protecting our economy and the people who rely upon it will always be a difficult task,” Tracy Streeter, director of the Kansas Water Office, told IPS.

The Ogallala Aquifer, which runs under eight Great Plains states and provides nearly a third of all irrigated water in the U.S., is falling, but “reducing the amount of pumping to sustainable levels would cause economic devastation”, she said.

“While some will argue we’re not doing enough, fast enough, a culture of conservation aimed at reducing the decline of the Ogallala is emerging in western Kansas,” Streeter added.

Downscaling to the local

A report by the U.S. Department of the Interior recently noted that one of the country’s most at-risk areas is the Colorado River Basin. This watershed, running through seven western states and two Mexican states, is the largest water source in the United States.

The Basin’s two reservoirs, Lake Powell and Lade Meade, are also the country’s largest reservoirs. And according to Ken Nowak of the U.S. Bureau of Reclamation, the U.S. federal agency that oversees water resource management, the two lakes are quickly drying out.

Cities across the western half of the country are scrambling to stop that from happening.

Founded in 2007, the Water Utility Climate Alliance, or WUCA, is a network that brings together 10 of the nation’s largest municipal water providers.

“WUCA has been doing some really great work. What they’re getting at is trying to understand what the science behind climate change is really telling us,” Betsy Otto, the director of the Aqueduct project at the World Resources Institute (WRI), a think tank here, told IPS.

“But the biggest problem with climate change estimates is that they only give us the global picture. The real challenge is then to downscale them to the local level and understand them.”

In Seattle, a co-chair of the WUCA network, city officials realised that their water demand estimates were far too aggressive, and did not reflect the city’s real needs.

“By carefully looking at the data, they suddenly realised they needed much less water than the estimates suggested,” Otto says. “So they started to bring their demand down, by simply saving water.”

In part, this achievement comes from simple strategies such as the city’s decision to distribute free energy-saving showerheads to all single-family homes, or the creation of water audits helping home- and business-owners understand how they can bring down their water waste.

The city of Seattle now claims to have enough water for the next 30 years.

“Of course, these measures need money in order for them to go through,” Otto notes. “But they’re still much cheaper than having to build water reservoirs.”

The broader challenge, advocates say, is to get other areas with critical current or future water-shortage problems to come up with their own plans. One of the most significant obstacles in this regard across the country may simply be the general approach to water supply.

“Water scarcity increases commodity prices,” John Mesko, a Minnesota farmer who raises grass-fed beef, told IPS. “Farmers make more and this gives them the push to invest in irrigation facilities. So it’s easy to think ‘I can afford to install irrigation, I make profits.’ That’s fine. But it’s just a quick fix. We need to prepare for the long haul.”

Indeed, unlike with surface water, there are almost no regulations on groundwater pumping. One way would be for federal regulations to put caps on allocations, or distribute permits as for surface water use.

“If you go to the western U.S., people are still in that mindset of trying to withdraw as much water as they can, as long as they can pump faster than their neighbour,” Otto warns. “They continue to think that there are simply no limits on how much you can withdraw.”

*With additional reporting by Aarthi Gunnupuri in New York.