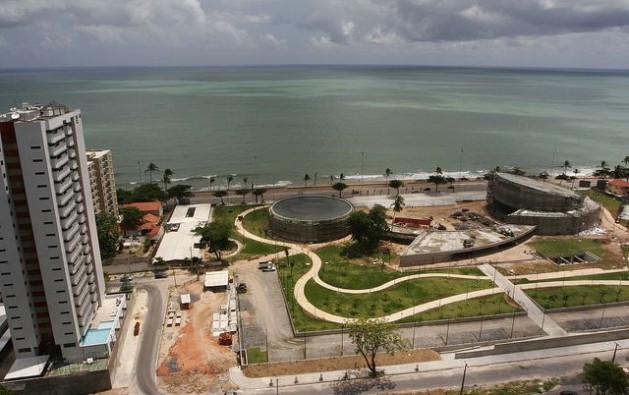 The sea level rise could inundate parts of Recife, in Brazil’s Northeast, on the Atlantic coast. Credit: Alejandro Arigón/IPS

RIO DE JANEIRO, Sep 28 2013 (IPS) - Amidst rumours that global warming has slowed over the past 15 years, the new report by the Intergovernmental Panel on Climate Change (IPCC) states that each of the last three decades has been warmer than any preceding decade since 1850.

The warming of the climate is “unequivocal,” says the IPCC. “The atmosphere and ocean have warmed, the amounts of snow and ice have diminished, sea level has risen, and the concentrations of greenhouse gases have increased.”

The full in-depth report will be published Monday Sept. 30, as the first of the four volumes of the AR5.

Brazilian climatologist Carlos Nobre, one of the lead authors of the Fourth Assessment Report, published in 2007, said the new report “gives no reason for optimism.”

“This report is a reality shock." -- Carlos Nobre

“Each of the last three decades has been successively warmer at the Earth’s surface than any preceding decade since 1850. In the Northern Hemisphere, 1983–2012 was likely the warmest 30-year period of the last 1,400 years,” the new summary says.

“The globally averaged combined land and ocean surface temperature data, as calculated by a linear trend, show a warming of 0.85°C over the period 1880–2012”, it adds.

But, it argues, “Due to natural variability, trends based on short records are very sensitive to the beginning and end dates and do not in general reflect long-term climate trends.”

And it sums up: “It is virtually certain that globally the troposphere has warmed since the mid-20th century.”

Nobre told IPS that “the report observes what is changing, in greater detail, and reduces uncertainties by means of updated scientific knowledge.”

It also confirms that climate change is principally due to human activity, added Nobre, secretary for R&D policy in Brazil’s Ministry of Science and Technology.

Humanity must decide to cut way down on the use of fossil fuels – which emit greenhouse gases that heat up the atmosphere – and turn to renewable energy sources instead, he said.

That is technically possible, he added, stressing that what is needed is for countries to make “a conscious choice.”

“That transition has a cost, but the cost has steadily gone down from what was projected 15 years ago. The problem is not the technology; it is a political decision,” Nobre said.

Carlos Rittl, head of the climate change and energy programme of WWF-Brazil, said “although global warming has experienced an apparent stabilisation with regard to the mean temperature, the warmest years on record occurred in the last decade. That does not leave us in a comfortable situation.”

The IPCC report, which assesses the latest published and peer-reviewed studies on climate change and compiles a comprehensive summary of the findings, was based on the work of 259 authors from 39 countries, and checked by 1,089 reviewers who made 54,677 comments and critiques.

Its release was preceded by a new wave of climate scepticism in the media and rumours about a slowdown in global warming.

The summary presented Friday says that based on different greenhouse gas emissions scenarios, by the end of the century global temperatures are projected to rise by at least 1.5ºC, relative to 1850-1900, in all but the lowest scenario considered

The highest IPCC scenario points to an average warming this century of 3.7ºC – which many experts say would be catastrophic.

After the last intergovernmental climate change conference, in Copenhagen in December 2009, when the countries failed to reach agreement on a new global climate accord, criticism of the IPCC grew, in particular due to the erroneous projection that the Himalayan glaciers could melt away by 2035.

“That information was used in an irresponsible fashion by those who try to deny global warming,” Rittl said.

Six years later, there is more and better scientific evidence to estimate, for example, how much the melting of ice will contribute to the rise in sea level.

By 2100, the sea level will rise between 24 cm and 63 cm, according to the most optimistic and pessimistic scenarios, respectively.

Rainfall “will increase in the wettest regions and will decline in those areas where rain is already scarce,” said Rittl, who has a doctorate in ecology.

In Brazil, the driest region is the arid Northeast, and the wettest areas are the south and southeast. Precipitation will increase between one and three percent in the south, depending on the speed of global warming, while drought patterns will become more severe in arid areas.

All of the trends confirmed by the report are “alarming,” Rittl said.

“Humans are responsible for these changes, which will make things worse, when there are already hundreds of millions of people in the world suffering from scarcity of water, food and the basic conditions needed for survival,” he said.

The first volume of AR5 comes out two months ahead of the 19th Conference of the Parties to the United Nations Framework Convention on Climate Change, to be held in Warsaw.

In the Nov. 11-22 climate change summit, countries will have to agree to make a global effort to guarantee the transition to a low-carbon economy, Nobre said. “This report is a reality shock,” he added.

In his view, Brazil is one of the “few good examples” because it managed to cut its greenhouse gas emissions by 38.4 percent between 2005 and 2010, due to the decline in deforestation in the Amazon rainforest.

“Brazil adopted voluntary commitments, but there is no ambitious accord at a global level,” Nobre said.

“The longer the delay in taking concrete action, the more difficult and unlikely it will be to reach a sustainable trajectory of climate change adaptation,” he said.

Rittl said governments must see climate change as a national challenge to development, social inclusion and poverty reduction. “The risks and the opportunities must be addressed in a very responsible manner,” he said.