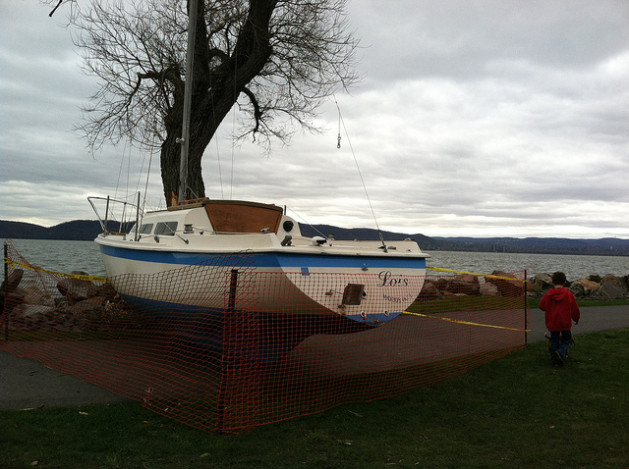 Boats washed up along the riverfront in Croton-on-Hudson, about thirty miles north of Manhattan, after Hurricane Sandy. Credit: Katherine Stapp/IPS

On Monday, a presidential task force released a report that details a strategy it says will both rebuild the region devastated in October by Hurricane Sandy and guard the nation from future climate change-related extreme weather.

"When we look at the costs of national disasters... it starts to become clear that those costs outweigh the costs of cutting down on the use of fossil fuels." -- Janet Larsen of the Earth Policy Institute

The Hurricane Sandy Rebuilding Task Force Strategy Report includes 69 policy recommendations, some of which are already in practice. The authors says they are designed to “help homeowners stay in and repair their homes, strengthen small businesses and revitalize local economies and ensure entire communities are better able to withstand and recover from future storms.”

The government’s signal that it will directly confront challenges related to climate change is viewed positively by some environmental experts.

“It is absolutely critical that the U.S. takes climate change into consideration as it decides how to invest money into repairing and rebuilding infrastructure,” Janet Larsen, research director at the Earth Policy Institute (EPI), a Washington think tank, told IPS.

Larsen believes the United States learned the hard way that its communities are vulnerable to climate change.

“Ten or 15 years ago, if you asked where there were likely to be ‘climate refugees’, it was commonly thought they would just be from small island nations,” she notes. “But after Hurricane Katrina” – which hit the U.S. in 2005 – “there were a quarter of a million people who had to leave their homes, and many have yet to return.”

Twenty-three federal agencies participated in drafting the Strategy Report, headed by the U.S. Department of Housing and Urban Development (HUD).

The report says its recommendations are aimed at “cutting red tape”, but advocates of more localised solutions note the continuing multitude of agencies involved. Such bureaucracy, they say, undermines claims that a massive federal effort would make responses to disaster more efficient.

“They talk about better coordination,” Ted DeHaven, a budget analyst for the Cato Institute, a think tank here that promotes small government, told IPS. “But the reality is that there are too many federal cooks in the kitchen.”

Nonetheless, the report presents guidelines for using the 50 billion dollars authorised by Congress and approved by U.S. President Barack Obama in January to rebuild the northeastern region.

According to HUD, the strategy outlined in the report is also intended “to serve as a model for communities across the nation facing greater risks from extreme weather and to continue helping the Sandy-affected region rebuild.”

The agency emphasises two of its recommendations as being of particular consequence, and both revolve around the potential for increased extreme weather in the future. One is to initiate “a process to prioritize all large-scale infrastructure projects and map the connections and interdependencies between them, as well as guidelines to ensure all of those projects are built to withstand the impacts of climate change.”

Another is to “harden energy infrastructure to minimize power outages and fuel shortages – and ensure continuation of cellular service – in the event of future storms.”

The report also urges the creation of a publicly available “Sea Rise Projection Tool” in order to keep vulnerable communities aware of how water levels may change.

Such measures, the authors suggest, “will improve our ability to withstand and recover effectively from future flood-related disasters across the country.”

In line with a growing trend across the globe, the stated goal of these new official recommendations is to achieve “resilient” communities – those with the ability “to respond effectively to a major storm, recover quickly from it, and adapt to changing conditions, while also taking measures to reduce the risk of significant damage in a future storm.”

Yet EPI’s Larsen suggests that some of this emphasis may be misplaced. She notes that while the concept of “resilience” is mentioned in the report over 300 times, root causes of climate change, such as fossil fuel emissions, are hardly addressed.

While she applauds the report for acknowledging the challenge of climate change, she regrets the lack of attention to these causes.

Larsen suggests that positive concepts such as rebuilding are politically popular and therefore easier to propose to the public, while “hard truths” that put the country on the defensive don’t resonate well with the United States’ “dominant” self-image.

Cato’s DeHaven agrees that politics are at play in the federally focused strategy. He says that state and local politicians, without considering long-term costs, are often all too quick to accept federal dollars.

Yet the long-term costs, according to DeHaven, are state and local governments that are dependent on federal cheques and therefore less in control of their own destinies.

“Once the federal government intervenes and accrues power, even after the original problem subsides, it tends not to relinquish that power,” he says.

For EPI’s Larsen, a better national plan would include a more rapid timetable for cutting emissions and acceptance of the fact that “there may have to be some areas where we don’t build at all.”

“The main idea,” she says “should be that when we look at the costs of national disasters and understand that climate change contributes to them, it starts to become clear that those costs outweigh the costs of cutting down on the use of fossil fuels.”