Q&A: “The Future of Brazil is the Natural Knowledge Economy” 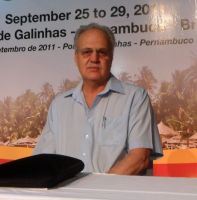 The Amazon and Cerrado regions face the risk of the extinction of species on a scale never before seen in human history. Credit: Fabíola Ortiz/IPS

In addition to a series of natural conditions that make the country particularly suited for this role, there is also a high level of awareness in Brazilian society that this future is possible, believes Nobre, the secretary of Research and Development Policies and Programs at the Brazilian Ministry of Science and Technology and a senior scientist at the National Institute for Space Research.

Brazil has the potential to explore a new model of tropical development, based on the full utilisation of renewable energy sources and a “natural knowledge economy”, stated the engineer and meteorologist who has conducted extensive climate research in the Amazon and shared in the Nobel Peace Prize awarded to the Intergovernmental Panel on Climate Change in 2007.

Q: What is your assessment of the situation almost 20 years after the Earth Summit in Rio de Janeiro? A: The convention on climate change (adopted in 1992) did not succeed in creating the impetus for a global emissions reduction movement.

The effort should be made, for reasons of equity and justice, first and foremost by the countries that have historically produced the most emissions, and secondly, by the developing countries, who will also have to work towards reducing greenhouse gas emissions if we truly want to embark on a less dangerous trajectory.

Global temperatures could rise by three to five degrees by the end of this century. That is a lot. They already rose by 0.8 degrees in 200 years. The current trajectory is rather pessimistic.

Q: So no progress has been made in this respect since 1992. A: In 2010 the largest volume of emissions in the history of human civilisation was recorded: almost 45 percent more emissions of carbon dioxide and other greenhouse gases than in 1990. There is no way you can look at these numbers without feeling worried.

Changing the climate in the space of 200 years to an extent that would normally take 20,000 to 30,000 years in accordance with the earth’s natural cycles is much too abrupt of a change for nature to adjust.

And the first direct victim is biodiversity, which is highly variable. The natural rhythm of emergency response of a given species is measured in hundreds of thousands of years, but extinction happens very quickly, a serious disturbance is all it takes.

Biologists estimate that if this pessimistic scenario persists uncontrolled until the end of the century, the very existence of 40 percent of the world’s species will be endangered. This would be a major cataclysm for life on planet earth.

Q: How can climate change affect water resources? A: The climate is more variable, which causes disturbances to the production systems that we depend on for survival. For example, today there are a large number of natural disasters and the capacity for resilience is decreasing.

This is the aspect that is most important when we talk about the shortage of water: the climate change projections for this century affect the semiarid regions, where the world’s poverty is concentrated.

In 100 years, the sea level could rise by between 50 centimeters and 1.4 meters. This would lead to the flooding of many low-lying coastal areas where hundreds of thousands of people live, which means they will have to be relocated.

In general terms, large increases in temperature and extreme weather events have a serious impact on global agriculture because of the increase in heat waves and droughts, which become unpredictable. The problem is that agriculture already uses three quarters of the available water resources, it is already at its limit.

Q: Where does Brazil stand in this context of climate crisis? A: There is undoubtedly a crisis and for Brazil it is no different. Not only is Brazil a mix of cultures in ethnic terms, it is also a mix of climatic and ecological conditions, and it suffers all of the problems that are suffered worldwide. The outlook for semiarid regions is critical in northeastern Brazil, which is the most highly populated semiarid region in the world, with 20 million people.

There has been a significant increase in natural disasters in Brazil, with floods, landslides, heat waves, contamination and an environment that is ever more inhospitable for quality of life.

The greatest ecological vulnerability is in the Amazon and Cerrado (tropical savanna) regions, where there is an enormous risk of the extinction of species on a massive scale, never before seen in human history.

Q: These are catastrophic forecasts. What can Brazil do to spearhead a movement of more sustainable development? A: Brazil is a country that is extremely rich in natural resources, more so than India and China. Brazil’s demographics are highly favorable, and there is a certain aspiration towards sustainable development. The population (currently 192 million) should be stabilised in the next 15 years and not surpass 215 million.

Unlike China and India, Brazil could plan for much more balanced development and a sustainable future, because it has an amount of natural resources that is perhaps greater than any other country in the world.

Today it uses renewable sources for 46 percent of its energy and that could rise to close to 80 percent by 2050. All of this makes it possible to envision a future for Brazil as one of the world’s cleanest countries.

Q: Do you really believe that Brazil, one of the emerging economies, wants to become an environmental power? A: There is an awareness in Brazilian society today that this future is possible. Brazil does not want to be a hegemonic military power, but it has the potential to explore a new model of tropical development and to be an environmental power by fully utilising renewable energy within the next 20 to 30 years.

We want to be the cleanest country in the world in the energy sector, in production, and in sustainable agriculture.