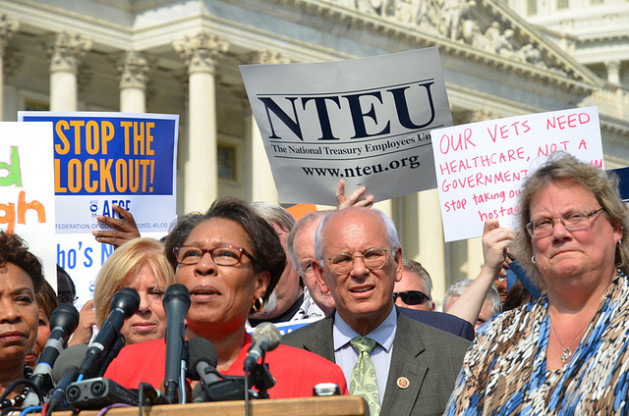 NEW YORK, Oct 12 2013 (IPS) - Early on the morning of Oct. 1, Tapia* left her home in Sunset Park, Brooklyn, took the subway into Manhattan and headed to the federal courthouse on Varick Street.

After spending years in a backlogged legal system, she was going to receive a place in line for a visa and green card that offered permanent status.

“But when we got there all the courts were closed,” Tapia told IPS.

With the federal government shut down, courts that don’t handle detainees are mostly shuttered, leaving thousands of cases unheard. For asylum seekers or longtime immigrant residents like Tapia, missing a day in court means risking being thrown to the back of a line that can extend for years.

“There were many people there in my situation that day,” she said.

Tapia emigrated from Mexico in 1998 to New York City, where she lives and works as a cook while raising two children, both born in the United States.

“I’ve paid all my taxes and put myself through school,” she said.

Underlying all immigration proceedings is the latent threat of deportation.

“This delay makes me feel nervous and insecure, it shouldn’t be this way,” said Tapia.

The judge at her preliminary hearing – where defendants present evidence arguing their case warrants a final, master hearing – told her lawyer she would assign a “cancellation of removal” (COR) at a later date, when the master hearing could be scheduled.

COR is a status open only to immigrants who have lived continuously in the U.S. for at least 10 years without a felony arrest and whose deportation would “result in exceptional and extremely unusual hardship” to a citizen or permanent resident spouse, parent or child.

Tapia’s six-year-old daughter suffers from early learning disabilities and requires assistance. Her two-year-old son is not yet out of diapers.

A quota of 4,000 COR visas is replenished at the start of the federal government’s fiscal year on Oct. 1. Final, master hearings, like the kind Tapia had scheduled, can only take place when visa numbers are available. Once they run out, judges are only able to offer unofficial, off-the-record promises. Defendants, even if confident of a judge’s empathy, have to continue their disrupted lives while their immigration status remains up in the air.

Every October, the window for getting a place in line narrows, leaving more people in limbo. This year, lawyers expected visas to run out in a matter of weeks.

Immigration attorneys say that even before the shutdown, hearing dates for their clients were already being scheduled well into 2017. The time between hearings, unless a judge makes another exception to “squeeze someone in”, quickly adds up.

“Every morning a court will have 50 preliminary hearings in 2 or 3 hours,” said Estela. “If they didn’t do that many, the wait for court dates would be five years.”

In a cruel twist, Tapia’s master hearing was already postponed last October after New York City courts were closed due to Hurricane Sandy. Meanwhile, courts in the rest of the country assigned the remaining visas to other applicants.

So Tapia waited another year and scheduled her final hearing for the first day of the fiscal year, also the day the shutdown began.

“My client cannot move on from this hell,” said Tapia’s attorney, Sara Zeejah.

“Because of our system, even cases that are almost completed cannot be taken off the docket,” Zeejah told IPS. “She [Tapia] cannot travel to see her ailing mother in Mexico even though the judge wants to give her a green card.”

Tapia’s children, who are the basis for her claim, are still young. But immigrants caring for older, adolescent children worry that by the time they have their cases heard, their dependents could be over 21, the cutoff for COR.

After several preliminary hearings dating back to 2011, Filho*, a truck driver originally from Brazil, finally had his master hearing calendared for Oct. 4.

His son, who was 15 when Filho first applied, is now 17. With his hearing now cancelled due to the government shutdown, Estela, his attorney, is concerned.

“His next court date maybe in 2016, when his kid is 19,” said Estela. “If the visas run out in the first week, he might have to wait another year, and then he only has one more.”

If Filho’s case isn’t heard before his son turns 21, he could be deported.

In the meantime, Filho can’t leave the U.S. to visit his wife and daughter in Brazil. “I call my daughter five times a day,” an emotional Filho told IPS. “I’m afraid because all these people, like me, have missed their court dates. What if I have to wait another two years? I want to see my daughter.”

As lawmakers in Washington take a piecemeal approach to restoring government services, immigrants and their lawyers feel they aren’t even on the radar.

Ting I. Li, an immigration attorney in Chinatown, NY, says all types of clients are affected by the shutdown.

“Next week we have a client who originally applied for asylum. While the case was pending, he married a U.S. citizen. To get a green card [through his wife] he needs a judge to terminate those proceedings first. So next week there is a master hearing for a judge to do that. But if the court is closed, the client can do nothing. They’ve already been waiting two years for this date; the next available date will probably be 2016.”

Another lawyer who spoke with IPS but did not wish to be named said court closures have made his job painful.

“One of my clients, a Nepalese man, was supposed to have a hearing that would finalise his wife and child joining him here. Because of the shutdown, it could be another two years. I don’t know what I’m going to tell him.”

*Clients in this story are referred to by one name only to protect their identities.