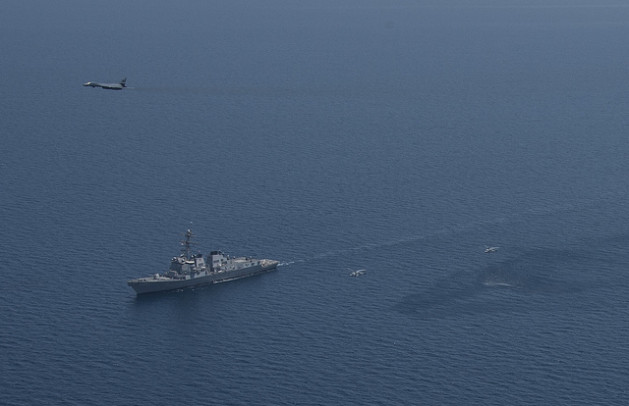 A U.S. Air Force B-1B bomber flies by ships participating in an exercise in the Arabian Gulf, August 2013. Riyadh views the U.S. as willing to risk sacrificing key strategic assets – in this case, the Bahrain headquarters of the U.S. Fifth Fleet -- as part of a broader retreat from the region. Credit: U.S. Naval Forces Central Command/U.S. Fifth Fleet/cc by 2.0

WASHINGTON, Nov 7 2013 (IPS) - While Monday’s meeting between Secretary of State John Kerry and Saudi King Abdullah may have helped calm the waters, the latest anxieties and anger expressed by Riyadh toward the United States has reignited debate here about the value of the two countries’ long-standing alliance.

In fact, a parting of the ways is already underway, according to Chas Freeman, a highly decorated former Foreign Service officer who served as U.S. ambassador in Riyadh during the first Gulf war.

“The Saudis were not convinced by Kerry,” Freeman, who retains high-level ties in Riyadh, told IPS. “Of course, both sides have their own good reasons for wishing to downplay that [fact] because the prestige of each in the region depends in part on the appearance of a cooperative relationship with the other.

“But in the past, we’ve been able to rely on them at a minimum not to oppose U.S. policy, and most often to support it. Now we no longer have that assurance, and in some cases, they’re moving to oppose it,” he said.

Built during World War II as a strategic bargain that would ensure the plentiful flow of Saudi oil to the U.S. and its allies in exchange for Washington’s military protection, the relationship has come increasingly under question both here and in Riyadh.

Here it was crystallised most dramatically by an op-ed by Fareed Zakaria, a prominent fixture of the foreign-policy establishment, published by Time magazine entitled “The Saudis Are Mad? Tough!”

“If there were a prize for Most Irresponsible Foreign Policy it would surely be awarded to Saudi Arabia,” noted Zakaria, a former editor of the influential Foreign Affairs journal who hosts a weekly foreign policy programme on CNN.

“It is the nation most responsible for the rise of Islamic radicalism and militancy around the world,” he noted, concluding that “Yes, Saudi Arabia is angry with the U.S. But are we sure that’s a sign Washington is doing something wrong?”

Zakaria’s assault, while the most spectacular, has not been the only one. Several influential commentators have suggested in the New York Times and elsewhere in recent weeks that the Riyadh-backed counter-revolution against the Arab Spring — which achieved its greatest advance with the military coup last summer Egypt’s first democratically elected president – will ultimately prove counter-productive and destabilising to the region and possibly even to the kingdom itself, most of whose top leadership is very old or in poor health.

For some of the same reasons, they have also criticised the strongly sectarian, Sunni-vs-Shia narrative that Riyadh, or at least its Wahhabi religious establishment, has propagated in its regional rivalry with Iran, particularly at a time when the West and Washington – and, most recently, Sunni-led Turkey — are seeking détente with Tehran, a prospect of considerable concern to the kingdom.

Serious strains between the two countries are not new. Riyadh participated in the 1973 Arab oil embargo to punish Washington for backing Israel during that October War. More recently, the 9/11 attacks, the perpetrators of which were almost all Saudi, spurred a major round of Riyadh-bashing, notably by pro-Israel neo-conservative forces that were then riding high in the George W. Bush administration.

The kingdom has harboured its own grievances, beginning with Washington’s refusal to seriously pressure Israel to accept a series of Saudi-initiated peace plans, most recently the 2002 Arab Peace Initiative.

And, in its competition with Iran, the effective handover by the George W. Bush administration of control of the Iraqi government to the Shiite majority after the 2003 U.S. invasion constituted for Riyadh perhaps its biggest strategic setback of the past several decades – and one to which the kingdom is still not reconciled, as evidenced by its refusal, despite Washington’s repeated entreaties, to send an ambassador to Baghdad.

Under Obama, however, ties have become even more strained, as Saudi doubts about Washington’s commitment to protect Riyadh’s interests have grown steadily.

Not only did Obama fail to follow through on demands that Israel cease settlement activity during his early showdown with Prime Minister Benjamin Netanyahu, but his insistence, after some initial hesitation, that long-ruling Egyptian President Hosni Mubarak resign shook Riyadh’s faith that Washington would stand by its long-loyal, if autocratic, regional clients.

Washington’s disapproval — however mildly stated — of the tough, Saudi-backed crackdown by Bahrain’s royal family against its majority Shia population in early 2011 compounded Riyadh’s impression that Washington not only failed to understand the vital interests of the kingdom itself, what with its own restive Shia community concentrated in its Eastern Province just across the causeway.

It also appeared to Riyadh that Obama was willing to risk sacrificing key strategic assets – in this case, the Bahrain headquarters of the U.S. Fifth Fleet — as part of a broader retreat from the region. That perception only increased last summer as Obama reacted with similar ambivalence – some cuts in military and security assistance — to the coup in Egypt which was strongly supported by the kingdom.

The brutal civil war in Syria and Obama’s clear reluctance to intervene on behalf of the Sunni-led opposition — most dramatically expressed by his failure to attack key military targets after concluding that the Iranian-backed Assad regime had indeed crossed his “red line” by killing hundreds of people with chemical weapons – clearly compounded these concerns.

Heralded already by Saudi Foreign Minister Prince Saud al-Faisal’s decision not to address this year’s U.N. General Assembly, Riyadh’s unhappiness hit the headlines with last month’s announcement that it would not take its seat on the U.N. Security Council that it had spent two years of intensive lobbying trying to obtain.

Three days later, the kingdom’s intelligence chief and former ambassador in Washington, Prince Bandar Bin Sultan al-Saud was reported by Reuters and the Wall Street Journal as telling European diplomats that Riyadh was considering a “major shift” in ties with Washington, particularly regarding its efforts to bolster the armed Syrian opposition. The decision to forgo the Security Council seat, he was reported as saying, “was a message for the U.S., not the U.N.”

This, in turn, was followed by a series of appearances and interviews here by Prince Turki al-Faisal al-Saud, also a former ambassador here, in which he repeatedly complained about Washington’s failure to bomb Syria after the chemical attack and provide substantially more military aid to the Syrian rebels, and expressed alarm over Tehran’s nuclear programme.

In this unprecedented diplomatic campaign, Riyadh clearly has powerful supporters here, including the Pentagon, which has steadfastly resisted suggestions from human rights groups and others to move the Fifth Fleet out of Bahrain and to cut all security assistance to Egypt as is required by law after a military coup against an elected government.

With a long history of partnership with the kingdom, the oil industry also remains a not-insignificant supporter of maintaining the closest possible ties with Riyadh, as do major arms contractors who depend heavily on sales to Saudi Arabia and its Gulf allies.

Finally, the Israel lobby appears to be discreetly rallying behind Riyadh due primarily to its status as Iran’s main regional rival, even as Saudi denunciations have also been praised by neo-conservatives.

While all of these forces are calling on the administration to take Saudi complaints seriously lest there be a “major shift”, as Bandar described it, the general reaction here, as Henderson put it, has been “an almost audible yawn,” although Kerry’s trip clearly signals a recognition of a need for greater consultation at the least.