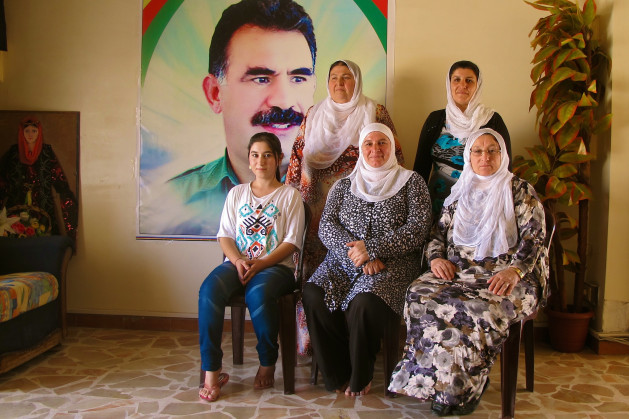 At Qamishli’s women centre, everyone is inspired by Abdullah Ocalan, the imprisoned leader of the Kurdistan Workers' Party (PKK). Credit: Karlos Zurutuza/IPS.

QAMISHLI, Syria, Nov 4 2013 (IPS) - “I got married when I was 14 and I already had four children at 20,” recalls Nafia Brahim. In her fifties now, she is working hard so that no other woman loses control of her life.

Brahim is one of 12 members of the assembly that runs the Centre for Training and Empowerment of Women in Qamishli, 680 kilometres northeast of Damascus. Theirs is a multidisciplinary action.

“We organise sewing and computer workshops for women but we also teach the illiterate to read and write in Kurdish language, we have gymnastics for the pregnant… all run by and for women,” Brahim tells IPS.

The most sought after course is called ‘women and rights’.

"We are not going to waste our first opportunity ever to get our rights."

“The emancipation of women begins when each of us finally understands that we actually have the right to emancipate, to be an individual capable of leading our own lives,” says Brahim, with all the enthusiasm of someone who has just been through the process.

She knows it was far from easy. After the uprising of 2011 against the Syrian government, the country’s Kurds opted for a neutrality that has forced them into clashes with both government and opposition forces. In July 2012 they took over the areas where they form a majority, in Syria’s north.

Today, the role played by women in Syria’s Kurdish areas is tangible from the very leadership of the Democratic Union Party (PYD), the dominant party among Syrian Kurds.

“All of our organisations, social, political, military etc., are built up on quotas of 40 percent for women, another 40 percent for men and 20 percent for individuals regardless of their sex,” Asia Abdala, PYD co-chair tells IPS.

The reason, she says, is the “double” revolution of the Kurds in Syria.

“After suffering Damascus’s boot for decades, ours is a national struggle, but women liberation comes at the same time. We will not make the mistake of waiting until the war is over to achieve our rights,” declares Abdala.

There are now 16 centres to assist women, and three academies that seek to “eliminate the patriarchal mindset ruling society for thousands of years,” says the senior Kurdish leader.

Like the men, Kurdish women in Syria now wear the green overall of the newly created Kurdish police, or the blue one of the garbage collection service, or the camouflage uniform of the People’s Protection Units, a former militia turned into a proper army.

Local women are journalists in a warzone, and women teach long tabooed subjects.

“The liberation of society as a whole starts with the women gaining their freedom,” Ilham Ahmet, spokeswoman of the Democratic Society Movement (TEV DEM), an umbrella organisation for political parties as well as a large number of civil groups tell IPS.

“We are not going to waste our first opportunity ever to get our rights.”

Substantial progress has been made, but everyone at Qamishli’s women centre knows theirs will be an obstacle race.

“Since we set up this centre two years ago we have hosted more than 150 women. Most of them were fleeing an unwanted marriage, and many were just girls,” says 55-year-old assembly member Faiza Mahmud.

“N. Z. aged 15, married a man of 37 who beat her and took their son,” Mahmud reads from his register book. “R. T. 16, was raped and abandoned in Turkey by her 43-year-old husband…there are dozens of cases like these.”

“We offer legal and economic support to the victims and mediate with families to integrate them into a society that has rejected them,” recounts the oldest of the group next to a huge mural boasting the face of Abdullah Ocalan, the imprisoned leader of the Kurdistan Workers’ Party (PKK).

“Ocalan has been the only leader in the Middle East that ever championed for the rights of women,” says Mahmud, showing a sympathy for the guerrilla movement that is openly shared by the TEV DEM as a whole.

“We often have to mediate with the local diocese to ease a divorce. For Christians it’s much more complicated than for Muslims.”

Over the seven months she has been working here, Mahmud says she has attended a large number of victims of sexual violence.

“Many cases are terrible because women who have been raped in the Middle East are often rejected by their families, and sometimes even killed by them.” Unsurprisingly, many women will never admit publicly they have been sexual assaulted.

Her testimony is matched by the International Federation for Human Rights (FIDH) report of May 2013. The FIDH is a group that brings together 178 members of human rights organisations in over 100 countries.

The report denounces the high number of violations in Syria both by government and by the opposition and it underlines that fear of rape is one of the main reasons women have to flee the country.

The report also concludes that “the social stigma attached to having been subject to sexual and other forms of gender-based violence is very strong in Syria.”

At 16, Aitan Hussein knows that well. The youngest among the centre’s volunteers is, her colleagues say, a “key player” when it comes to tackling abused teenagers.

“The partnership between women of different ages gives me a very ample view of what women have gone through,” says Hussein, who combines her work at the centre with her high school studies.

This early activist says she feels lucky because her family “will not impose any additional burden, or a marriage of any kind.” But comfort at is not enough.

“I simply couldn’t stand idly by while women around are still being abused,” says the young Kurdish woman. “We have to keep fighting until nothing like this ever happens again.”