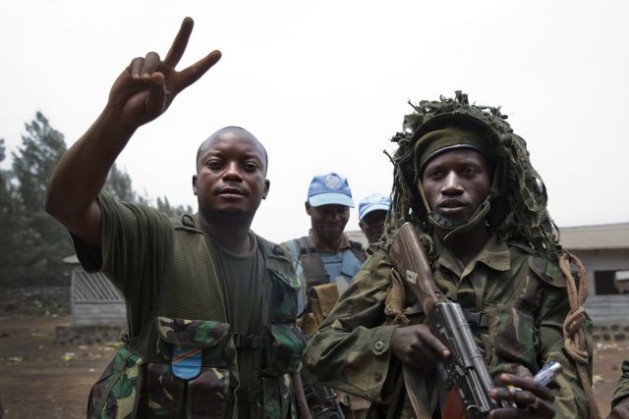 Troops of the Forces Armées de la République Démocratique du Congo (FARDC) cheer after taking control, with assistance from the Force Intervention Brigade (FIB) of the UN Stabilization Mission in the Democratic Republic of the Congo (MONUSCO), of a highly strategic position of the M23, an area known as Three Towers on the hills of Kibati, five 5 kilometres north of Goma. Credit: UN Photo/Sylvain Liechti

That victory was thanks in part to the support provided by the 25,240-strong U.N. Stabilisation Mission in DRC (MONUSCO), but more importantly, the 3,000-strong first-ever U.N. Force Intervention Brigade (FIB) created by the Security Council last March.

An African diplomat told IPS the success in DRC may change the dynamics of peacekeeping in some of the other U.N. operations in Africa, including in Darfur, South Sudan and Cote d’Ivoire.

But any change in the mandate of the 15 peacekeeping operations – eight of which are in Africa – has to be approved by the Security Council, he added.

By accident or by design, the United Nations is currently seeking to strengthen the military component of its peacekeeping operations with “force enablers”, including military and transport helicopters, armoured personnel carriers (APCs), night vision equipment and unmanned aerial vehicles (UAVs).

“I see several priorities for the year ahead,” said Under-Secretary-General for Peacekeeping Operations Herve Ladsous.

One is to meet the shortfalls in equipment by strengthening the military and police capabilities on the ground, he said. South Africa, one of three countries in the FIB, along with Tanzania and Malawi, has already agreed to provide three of its home-made military helicopters and two utility helicopters to MONUSCO.

Two other countries, Bangladesh and Ukraine, are already providing attack helicopters to the same peace mission in the Congo.

Western nations are also providing military equipment, including 10 APCs each from the United States and the European Union, plus two from the United Kingdom. Sweden has provided a transport aircraft for a limited period of two months.

Asked if these weapons are being purchased or provided gratis, Kieran Dwyer, chief of the public affairs division at the Department of Peacekeeping Operations and Field Support, told IPS the United Nations does not purchase military equipment such as attack helicopters.

“Member states provide these,” he said, explaining that troop-contributing countries also equip their own personnel.

Some worry that the shift from defensive to offensive operations, as in DRC, may create dangers for humanitarian organisations in conflict zones.

Michael Hofman, a senior humanitarian specialist with Doctors Without Borders, was quoted by the New York Times Wednesday as saying: “You can have a helicopter, one day used to deliver the Force Intervention Brigade troops to attack a village, and next day, to deliver aid to the same village.”

“In this case, it is not even a blurring of the lines,” he added.

The supply of weapons by developing nations, along with their troops, is also providing a boost to their domestic arms industries.

Some of them, like the Rooivalk helicopter used in DRC, have been designed in South Africa, and others are increasingly from foreign designs produced under licence in South Africa, he said.

India, the third largest troop contributor, has a large arms industry that assembles and produces Russian-designed armoured vehicles. It also produces its own helicopter based on European technology, but currently it is more likely to deploy helicopters supplied directly from Russia or produced under licence from Eurocopter, Wezeman said.

“India has a nascent UAV industry but I have not heard of Indian UAVs being operational because until now India relies mainly on UAVs supplied by Israel,” said Wezeman.

Pakistan has an arms industry that licence-produces items like armoured vehicles and small arms designed in a variety of countries, including the United States and China. But Pakistan imports its helicopters.

Bangladesh has a very basic arms industry and is very dependent on arms imports, including attack helicopters provided for U.N. missions.

She said South Africa relies heavily on foreign partnerships and outside assistance; in many cases a South African defence company will exchange the ownership stake for technology or financial assistance.

UAVs, which were deployed for the first time by U.N. peacekeepers in DRC, seem to be a focus for the South African defence industry right now, she noted. Denel’s Seeker 400 is expected to fly later this year. And its Bateleur MALE is also under development.

Additional domestic UAVs with longer range systems are also under development in South Africa, she added.