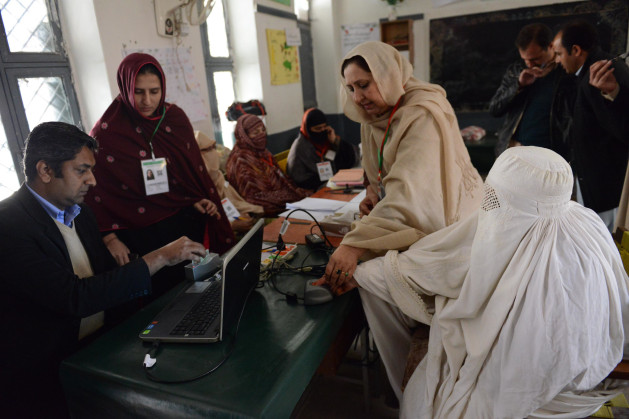 At a booth in Peshawar to test a fraud-proof voting system. By Ashfaq Yusufzai/IPS.

PESHAWAR, Pakistan, Dec 31 2013 (IPS) - Elections in Pakistan have long been marred by allegations of fraud, but now one of its provinces is hoping to give democracy a boost with the help of technology. Khyber Pakhtunkhwa in the north of the country has given a thumbs up to the biometric voting machine.

Using the biometric system in Khyber Pakhtunkhwa was the idea of cricket legend Imran Khan, who now leads the Pakistan Tehreek Insaf party.  “It will be a revolution in the election history of Pakistan as it will end irregularities in polls,” he told IPS.

The system is to be launched by the Election Commission of Pakistan with the support of the National Database and Registration Authority (NADRA).

Khan is hoping the biometric system will be in place for the local government elections in Khyber Pakhtunkhwa, where his party is in power, even though the poll dates are yet to be announced.

“Once we introduce it, the other three provinces will follow,” he said. “The system is already in use in neighbouring India where it has proved extremely effective,” he said.

Trials were conducted in Khyber Pakhtunkhwa Dec. 28, with mock polling being held in four union councils in Peshawar, the provincial capital.

Khan says it is part of his fight to end bogus voting in the country. “We are committed to holding elections in Khyber Pakhtunkhwa with the biometric system. None of the parties will be able to raise a finger.”

Khan had issued a 2,500-page white paper alleging large-scale rigging in Pakistan’s May 11 general elections by the Pakistan Muslim League (Nawaz), which came to power in Islamabad with Prime Minister Nawaz Sharif at its helm.

“We have proof that the election was massively rigged,” said Khan.

“We have 64 petitions in court against bogus voting in the Punjab province,” Khan told IPS. “The Supreme Court of Pakistan has admitted our petition for verification of thumb impressions in four constituencies,” he said.

NADRA is gearing up for the biometric voting exercise. Machines costing Rs.35,000 (330 dollars) each and containing complete voter information will be installed in polling stations.

Qaboos Aziz, director of NADRA, said, “The system will use the thumb impression of voters for identification. One person will be able to cast one vote and the machine will recognise any effort to cast a second vote. Only people whose names have been fed into the machine can vote.”

“The verification of voters through the biometric system takes only 10 to 15 seconds and the duration will go down further when we get trained staff,” he said.

Yousaf Khan, a local  who took part in the mock voting, said, “The system will only allow computerised identity cards issued by NADRA.”

The machine rejected his ID card when it was re-inserted, he said. “Only registered voters at polling station were able to cast ballots while others were rejected by the machine,” he said.

Imran Khan says the biometric system will boost democracy in Pakistan. The new technology will enable genuine public representatives to win, he said.

“Political parties have 350 cases in court regarding frauds in the May elections. We are going to introduce a system that will be appreciated by all parties.”

Khan, who helped Pakistan win the cricket World Cup in 1992, says he had earlier campaigned for the introduction of neutral umpires in international cricket, as a result of which cricket had become more competitive.

“Now I am going to ensure impartial elections through the biometric voting system,” he said. “Sooner or later, we have to adopt a modern system, so why not now?”

Many say such a system was overdue.

A journalist who attended the trials at two polling stations in Peshawar said, “A new system of voter verification was long needed in view of regular allegations of rigging by parties and candidates that lose.”

People largely seem to be in its favour.

“Allegations of fraudulent tactics to win polls have cast aspersions on Pakistan’s democracy, but now people will have to accept the election results,” said Muhammad Rafique, a teacher who cast his vote in the mock polls.

Khyber Pakhtunkhwa is yet to announce its local government elections while Balochistan conducted them Dec 7. Sindh and Punjab will be holding the polls on Jan 18 and Jan 30 respectively.

“We are delaying the process because we want to hold free, fair and transparent elections at and make the province a role model for other provinces,” said Shah Farman, the Khyber Pakhtunkhwa information minister.

“We encountered some problems during the mock polls and these will be removed. We are making history. In  future, nobody will be able to snatch away the mandate of the people by rigging elections,” he said.