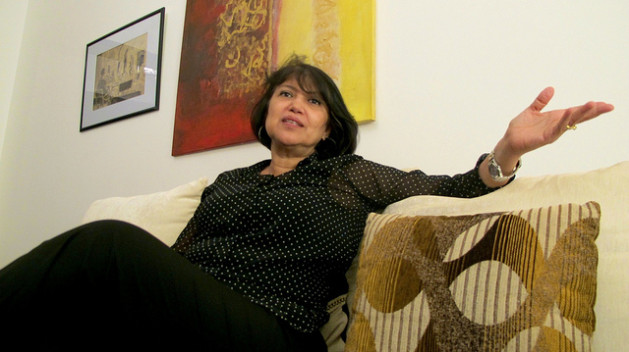 TRIPOLI, Dec 19 2013 (IPS) - Unless immediate changes are enforced, Libya is heading towards an “Afghan” model regarding women´s rights, Aicha Almagrabi, a Libyan writer and senior women rights activist, told IPS from her residence in Tripoli.

Women who fight for their rights in Libya “are constantly insulted, harassed and threatened,” lamented the 57-year-old university professor, who also chairs the Organisation for the Defence of Freedom of Thought.

Almagrabi studied philosophy in Libya and France and is the author of four books of poetry, a novel and a play which has just been published in Arabic. She´s currently working on three other books, a task which she combines with her activism and lessons on “Philosophy of the Plastic Arts”.

Q: Last October marked two years since the overthrow and brutal killing of Muammar Gaddafi. What has changed for Libyan women since then?

A: Things have changed but not for the better, and we´ve lost the few rights we had. As an example, polygamy is still common currency in Libya but, at least, a man needed his wife´s approval to marry a second wife under Gaddafi (1969-2011). That is no longer required.

Actually, reviewing the law on polygamy was the first thing Mahmoud Jibril (head of the National Transitional Council) mentioned in his famous speech at the end of the (2011) war, even before talking about reconstruction or rebuilding civil society…

Changes? Libyan women were handed over as spoils of war.

At a street level, when women protest they face a lot of violence. Women advocating their rights are constantly insulted, threatened and harassed. We were part of the revolution, we had our own female martyrs, but we didn´t get any political benefits out of it.

Q: But some women do hold government positions today, don´t they?

A: They do, but they´re struggling to keep their seats. Their parties used them for mere electoral purposes. In the Committee of 60 (the group to be set up to write Libya´s constitution) there are only six seats for women.

One of the members of the General National Congress (the Libyan legislature) even suggested measures to prevent men and women from sharing the same space during meetings. Some figures are also eloquent: 90 percent of teachers are women but only two percent have reached the decision-making level.

A: The mufti holds religious power and is also backed by both the political and military bodies. They want Sharia (Islamic) law to be at the core of the penal code and the future constitution.

What they want to implement is actually based on their own interpretation of the Quran, so we could say that it´s more dangerous than the holy book. There´s always been a lot of talk about Sharia but few seem to notice that there are many versions of it: do we want the Iranian one? The Afghan? Maybe the Moroccan?

One of their main goals is to control women through their own vision of the Quran; that´s one of the reasons it is mandatory to keep religion separate from politics.

Girls at school are now forced to wear the hijab (a headscarf that covers women’s hair and necks but not their faces) and the mufti is also campaigning for all women to always cover their hair.

I´m a professor at Zaytuna University (in Tripoli), and I´m the only one who doesn´t cover her hair. The rest of my female colleagues wear either hijab or niqab (a headscarf and veil which reveals only the eyes). Their number is growing not because of the law – it´s more about group pressure.

Q: There are also rumours about a new fatwa (Islamic ruling) to be enforced from January 2014, according to which women won´t be able to travel across the country without a muharram (male companion).

A: It wouldn´t surprise me at all. I live outside the city, and on Feb. 13 I was stopped by a group of armed men on my way to work. They held me at gunpoint for an hour and a half because I had no muharram travelling with me. I took the issue to the media and it got the attention of the general public. On Mar. 14 we organised a protest called “the march for the dignity of women”. As usual, we were insulted, beaten and harassed.

Q: Is increasing violence in the country the most pressing problem for Libyan women today?

A: It´s just one among several. Women are limited by strong domestic ties. Besides, the streets are not safe for them. There are many street assaults and even kidnappings, but there´s still no visible will to grant women rights in the new constitution.

A low level of participation in civil society is also a big issue. We were very strong at the beginning (of the 2011 revolution) but growing pressure led to a decline in that strength since the end of the war.

Today we are very disappointed because we also took part in the revolution and now they want to change our ideals of freedom and justice through fatwas and religious speeches which have a very strong influence among the new generations.

Even Gaddafi switched to religion back in the 1980s when he realised that Islam could be an effective tool to gain greater influence over people. However, the lack of rights and freedom during his rule pushed many to more extreme positions, such as the Muslim Brotherhood or the Jihadists.

Q: What can help Libyan women in such a difficult scenario?

A: Even in the unlikely case that we finally get a constitution based on human rights, we would also need to conduct another revolution to change the mindset of Libyan women.

Nevertheless, a key question is to break the militia rule as well as that of all armed groups outside the umbrella of the national army and police before the constitution is written. If that doesn´t happen, we´ll be heading towards an “Afghan model” in women´s rights.