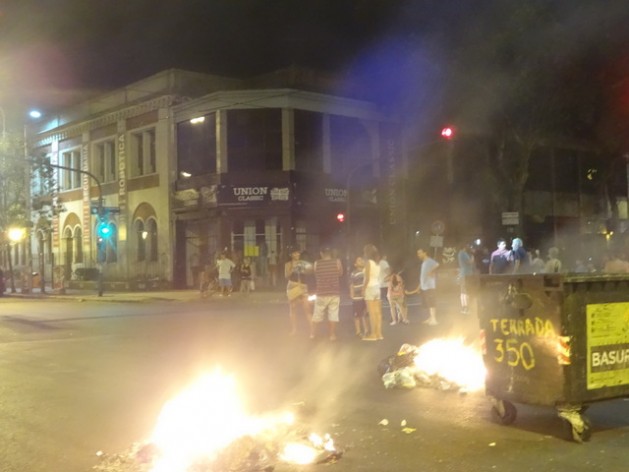 BUENOS AIRES, Jan 10 2014 (IPS) - Record temperatures at the start of the southern hemisphere summer in Argentina have been accompanied by highs on the thermometer of social discontent, as consumption peaks left thousands without electricity and threw into sharp focus the failings of the privatisation of the power industry in the 1990s.

The power outages have gradually become less and less frequent. But the street protests continue, as does the controversy over whether the shortages in energy supply were the sole responsibility of the electricity companies, or whether the government should be blamed as well.

Debate is also raging over what needs to be done to avoid a repeat when the next heat wave hits.

It’s almost midnight in the middle-class neighbourhood of Flores in central Buenos Aires, and the pot-banging protests have woken up the privileged few who have power and air conditioning, in the midst of temperatures that at the end of 2013 were over 40 degrees C in Buenos Aires and surrounding districts.

Men, women and children are blocking traffic with bonfires as they furiously beat spoons against pots and pans to get the government’s attention.

The heat wave in northern and central Argentina left at least six people dead, and drove electricity consumption up to record levels, which caused blackouts that lasted from two hours to 10 days in different parts of Buenos Aires and outlying neighbourhoods, affecting some 200,000 people at the peak of the heat wave.

Many welcomed the New Year by candlelight or while staying at the homes of relatives who still had electricity.

“All of the food in our fridge went bad,” a local resident from Flores, who only gave her first name, Jacqueline, told IPS. “We don’t have any water because the pump doesn’t work [without power]. We have to climb up four storeys carrying buckets to take a bath, and with this horrible heat you can’t sleep without a fan.”

The criticism mainly targets Edesur, a subsidiary of Italy’s ENEL, one of the distributors of electricity on the outskirts of Buenos Aires, along with the Argentine company Edenor. The two firms took over distribution of electricity in the area after privatisation of a number of sectors began in 1992.

Because of the deteriorated condition of the power grid, it was unable to handle the extraordinary levels of consumption, and cables and transformer stations burned out.

“They didn’t make the investments that they were supposed to make, and they use their policies to extort [the government]. If the business isn’t profitable, as they claim, why don’t they leave?” complained Federico Bernal, editorial director of the Latin American Centre of Scientific and Technical Research (CLICET).

In Argentina, the energy industry is subsidised and rates are frozen, although the centre-left government of Cristina Fernández began to exempt the wealthiest neighbourhoods from that policy in 2013.

The companies say that with the high inflation rate, the policy discourages investment.

Bernal told IPS that there is no “energy crisis,” but rather “a circumstantial problem” concentrated in the distribution of electricity.

Argentina has a total installed generating capacity of about 25,000 MW, higher than the country’s demand. Even on the days of highest consumption, supply exceeded demand by some 3,000 MW, he pointed out.

The expert also attributed the supply problems to economic growth.

In the decade from 2003 to 2013, the expansion of the economy and the improvement in living standards and social conditions drove up demand for electricity by 50 percent. Household consumption, in particular, doubled.

The government began to take measures to address the rise in demand, Bernal said. The works in progress – thermal and hydroelectric plants and renewable sources like solar and wind energy – should bring installed capacity up to 32,100 MW by 2015.

But according to Bernal, the national electricity regulator, ENRE, in the Planning Ministry, shares responsibility for failing to “force the companies to make the necessary investments and to upgrade.”

But he admitted that “it was very difficult to foresee what happened, with the worst heat wave in 100 years.”

“This is a problem of a long process of disinvestment, lack of oversight and control, and disorganisation of an essential branch of the economy,” Gustavo Vera, an opposition legislator in the city of Buenos Aires, told IPS.

Vera brought legal action against executives of Edesur and Edenor, ENRE, the city government, and central government officials, for “sabotage and disturbance of the public order.”

The legislator argued that the courts must investigate whether the chaos has been a maneuver by the power companies to force a rise in electricity rates.

He also stressed the lack of transparency in the companies’ investments, as a precedent to the crisis.

Víctor Bronstein, director of the Centre for Studies on Energy, Politics and Society, agreed that the problems had nothing to do with the generation or distribution of energy.

“We are not in an energy crisis,” he told IPS. “There was a problem of distribution that can be solved. If the necessary investments are made, by 2015 we can have a calmer summer.”

The expert referred to the errors in the wave of privatisation during the neoliberal government of Carlos Menem (1989-1999), which he said caused the current “tension between the logic of the market and the security of the energy supply.”

“When energy distribution was privatised, quality of service was used as a criterion of control,” and the state was left with only the task of levying fines, and without participation in planning, he said.

But that logic, based on expanding the number of customers, “doesn’t work” in this industry because “there is no substitute for energy,” as there are no competitors in the regions assigned.

“The state has to find ways to provide guarantees in the areas where the company can fail,” such as “reaching agreements on an investment plan” or “auditing investment models and projections,” he said.

Bronstein said there were shortcomings in the planning of power distributors, which failed to take into account factors like population and economic growth, and even cultural changes in consumption patterns.

“They cut rates and easy access to credit was provided. The use of air conditioning became more widespread. And the critical situation occurred at a time of high temperatures,” he said.

The expert said the low cost of electricity encouraged waste, which should be counteracted with “awareness-raising campaigns.”

He also mentioned other “pending tasks,” such as designing a billing system that “establishes a social tariff that isn’t only based on consumption patterns.”

The government fined Edenor and Edesur and ordered reparations for people affected by the blackouts.

It also stripped the companies of control of the investment fund, to which the government contributes funds for infrastructure works to repair and upgrade the power grid.

According to the official resolution, the “negligent attitude” of the private companies that hold concessions to supply electricity meant the resources “were not used in works that would have at least partially eased the situation.”

The government is also analysing the possibility of cancelling the two companies’ contracts.