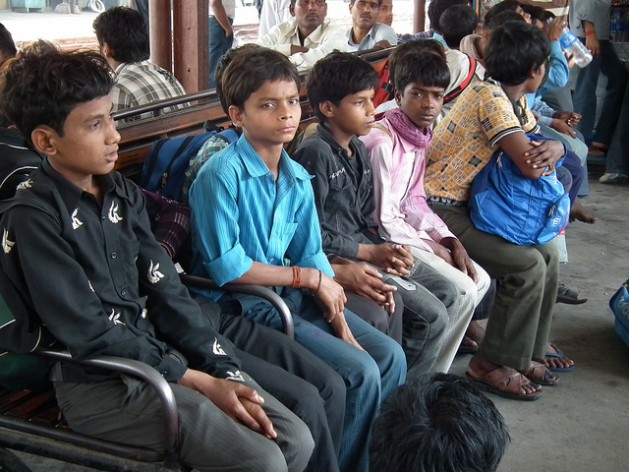 WASHINGTON, Jan 28 2014 (IPS) - Advocacy groups and some legislators are calling on the U.S. government to mandate an increase in corporate supply chain transparency, with the aim of cutting down on the estimated 14,000 to 17,000 people trafficked into the United States each year and the tens of millions enslaved globally.

“Human trafficking is a 32-billion-dollar industry, second only to drug trafficking as an organised crime,” Melysa Sperber, director of the Alliance to End Slavery and Trafficking (ATEST), a coalition of human rights groups, told a briefing on Capitol Hill on Monday. “Between 21 and 30 million people are enslaved worldwide.”

“We’ve seen kids work for 20 cents a day to buy a couple of potatoes when they go home after a full day of heavy manual labour." -- Karen Stauss

ATEST and its member organisations are working to address one of the underlying mechanisms in forced labour: global corporate supply chains. The coalition is urging lawmakers to adopt legislation that would require companies earning over 100 million dollars per year to file reports on their supply chain and labour management practices, both with U.S. regulators and on their websites.

Because of the complexity of global supply chains, companies are often unaware of coercive labour practices carried out by suppliers and subsidiaries.

“We’ve found that vulnerability to forced labour is pretty pervasive in a number of industries,” Quinn Kepes, the research programme manager for Verite, an NGO focused on labour issues in global supply chains, told IPS. “A large number of companies are at a high risk of having trafficking in their supply chains.”

Businesses often turn to labour brokers at all levels of the supply chain. These brokers, who face very little regulation, can charge workers exorbitant recruitment fees and have received widespread criticism for misrepresenting the work that the people they recruit will be doing.

“Labour recruitment has been a huge issue if you look at the construction of U.S. Army installations in Iraq and Afghanistan,” Karen Stauss, the director of programmes for Free the Slaves, a Washington-based advocacy group, told IPS. “There’s been a lot of documentation of trafficking of workers from South Asia to the Middle East for low-cost construction.”

The U.S. mainland is also not immune to unethical labour recruiters.

In 2012, Omelyan Botsvynyuk, a Ukrainian, was sentenced to 20 years in prison for smuggling Ukrainian citizens to the United States under false pretences. Although Botsvynyuk and his brothers had promised the men that they would be paid 500 dollars a month, they were forced to clean major retail store chains, such as Target and Walmart, without pay.

Botsvynyuk reportedly told the men that they could not leave until they had worked off their debts, ranging to as high as 50,000 dollars.

Such debt bondage is a common tactic used by exploitative recruiters and businesses. Employers can directly levy debts on employees for the use of living facilities and tools needed for the job, such as mining equipment.

“In some cases, debt bondage is happening to people who are not literate and don’t understand how debt and interest accumulates,” said Stauss. “They’re not even aware themselves of how debt is illegally exploited.”

Stauss says that the extraction of so-called conflict minerals from the Democratic Republic of Congo has also been found to rely heavily on child labour. Such materials are key components in modern consumer goods.

“We’ve seen kids work there for 20 cents a day to buy a couple of potatoes when they go home after a full day of heavy manual labour,” Stauss said. “Those minerals connect to many different things like laptops, cell phones and electronics.”

Child labour is equally present in the manufacturing sector. A new report from Harvard University found 1,406 specific cases of child labour in the Indian carpet-making industry, which exports extensively to the United States and other industrialised countries.

The Harvard researchers estimate that forced labour makes up 45 percent of the industry’s work force, with child labour specifically accounting for around a fifth.

Earlier this month, President Barack Obama named January the National Slavery and Human Trafficking Prevention Month. “As we work to dismantle trafficking networks and help survivors rebuild their lives, we must also address the underlying forces that push so many into bondage,” the president stated.

Although currently proposed legislation would not compel companies to take any actual action on questionable supply chain practices, the groups say public pressure is building.

A House of Representatives bill that would require greater transparency for third parties bringing foreign workers to the U.S. is currently sitting in committee.

This proposal “would combat human trafficking, forced labour and exploitation by requiring that workers coming to the United States receive accurate information about the job, visa and working conditions,” Shandra Woworuntu, an anti-trafficking lobbyist, told Monday’s briefing. “The bill also ensures that no recruitment fee is charged to the workers and requires the recruitment agency to register with the Department of Labour.”

Woworuntu herself was flown to the U.S. by a third party agency promising her a job at a hotel in Chicago. After paying a recruitment fee and arriving in the United States, she says the man who picked her up confiscated her passport and forced her into sexual slavery until she was able to escape.

While Congress has not taken action on transparency legislation at the federal level, the state of California has already introduced similar legislation. Yet while that law, known as SB-657, was slated to take effect starting at the beginning of 2012, advocates note that the state has yet to fully implement the law.

“Two years later, [SB-657] hasn’t been implemented,” Ima Matul, a coordinator for the Coalition to Abolish Slavery and Trafficking (CAST), told IPS. “We’ve been asking the California attorney-general for those corporations and businesses to release any trafficking or slavery involved in their supply chains.”

In the meantime, CAST has endorsed a website called Know the Chain, which catalogues corporations and their supply chains, allowing consumers to better ascertain whether or not forced labour is involved in the products they buy.

“While some companies have not yet posted disclosure statements, others have taken an important first step by posting a statement addressing the majority of SB-657 requirements,” Know the Chain states on its website.

Thus, while California’s state law lacks enforcement, some companies are voluntarily disclosing information on their supply chains and labour practices.

“Kmart, for example, just joined the movement and promised not to have slavery involved in their supply chain,” says Matul.