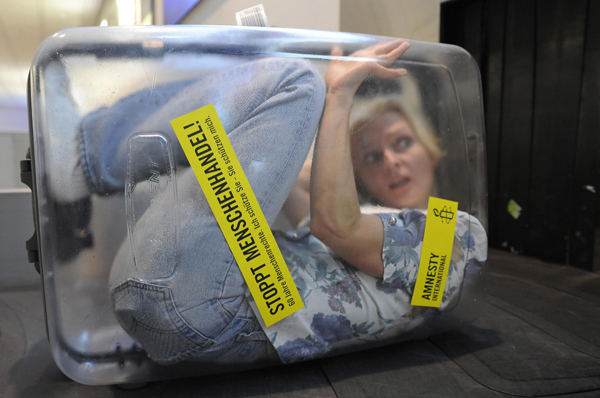 RIO DE JANEIRO, May 20 2013 (IPS) - In contravention of international law, in Brazil trafficking in human beings remains invisible and unpunished, which encourages the practice of trafficking for sexual exploitation, forced labour, illegal adoption and the trade in human organs, according to experts.

Local laws punish drug trafficking more severely than human trafficking. The sale of drugs carries penalties of between five and 15 years, while trafficking of persons for sexual exploitation is punished with a maximum sentence of eight years, with work release allowed.

“Human trafficking is still an invisible crime. What we have here now is real impunity,” judge Rinaldo Aparecido Barros, a member of the National Council of Justice’s working group on human trafficking, told IPS.

An average of 1,000 persons a year are recruited in Brazil and sent abroad, the public prosecutor’s office said at a public hearing on “Tráfico de pessoas: prevenção, repressão, acolhimento às vítimas e parcerias” – Trafficking in persons: Prevention, repression, care of victims and (illegal) associations – that it held in this city on Friday, May 17.

The goal was to gather and share information about combating human trafficking and to organise joint action to prevent and crack down on the crime. The meeting focused on Brazil’s role as a source country of victims for other parts of the world.

Brazil is also a destination country for victims of human trafficking, and there is internal trafficking of Brazilians for exploitation within the country’s borders as well.

In the last three years, 3,000 Brazilians were transported abroad and subjected mainly to sexual exploitation and slave labour, participants at the meeting described.

“This is a significant number. A large group of people have been deprived of their dignity. The thousands of cases documented every year do not represent the total, because we do not know how many cases escaped our notice,” said federal deputy attorney-general Raquel Elias Ferreira Dodge.

The actual number of victims sent abroad by human trafficking rings is unknown, participants at the meeting agreed.

“We have to work more effectively so that these crimes are condemned without delay. The crime of trafficking in persons injures human dignity,” said Dodge, who is a member of the Higher Council of the federal public prosecutor’s office (MPF).

She said, “Slave labour negates the personhood of the individual and converts the victim into merchandise that can be smuggled and trafficked.”

But hindering the fight against human trafficking in Brazil is the fact that it is only a crime when it leads to sexual exploitation or slave labour, Erick Blatt, the representative of the federal police in Rio de Janeiro, told IPS.

“It is very hard to identify the crime; investigations can only be initiated on the basis of reports, without the certainty that illegality can be proved,” said Blatt, who is also the representative of Interpol, the international criminal police organisation, for the state of Rio de Janeiro.

Moreover, when it comes to international trafficking, “most people go voluntarily to the place where they are exploited: the majority do not know that their passports are going to be taken away,” he said.

The International Organisation for Migration (IOM) defines human trafficking as “the recruitment, transportation, transfer, harbouring or receipt of persons, by means of the threat or use of force or other forms of coercion, for the purpose of exploitation.”

The forms of coercion cited are “abduction, fraud, deception, the abuse of power or of a position of vulnerability or the giving or receiving of payments or benefits to achieve the consent of a person having control over another person.”

People smuggling, on the other hand, is limited to profiting from covertly transporting migrants, at their request, from one country to another where legal entry would normally be denied at the border. This is illegal, but no deception may be involved.

Article 231 of Brazil’s criminal code defines the crime of sexual exploitation, and article 149 describes subjection to slave-like conditions. Both crimes are punished relatively leniently, with lighter sentences than for other offences.

The United Nations Convention against Transnational Organised Crime, adopted in 2000 and ratified by Brazil in 2003, specifically identifies human trafficking crimes and proposes wide-ranging punishments, which Brazil has still not incorporated in its laws.

“We are going against the flow of international legislation. In Brazil, the issue has been inadequately treated. Human trafficking is a crime against humanity that robs people of their human dignity,” Judge Barros complained.

He said the best measures for fighting human trafficking were those that block the assets of the trafficking rings, in order to attack their economic flank.

Trafficking in persons is run by complex international crime syndicates that, in Brazil, recruit poor women who have no opportunities for a better life, lawyer Michelle Gueraldi of the Trama Project, an umbrella group for NGOs that combat human trafficking, told IPS.

These women emigrate voluntarily, often out of the desire to improve their lives, and end up being exploited in Spain, the United States, Portugal and Caribbean countries, among others, she said.

Blatt added that Brazil, in turn, is a destination country for women victims of human trafficking from Eastern Europe, especially Hungary and Poland.

“Trafficking in persons is a violation of human rights. The Trama Project is working on prevention and on victim protection. We also receive denunciations of cases, and we find that the majority of recruiters are persons known to and trusted by the victims,” Gueraldi said.

In February the Brazilian government established its Second Plan to Combat Trafficking in Persons, but the challenge is to put these policies into practice, she said.

Blatt admitted that tracing victims of human trafficking across borders is difficult for the local police and for Interpol.

“If communications between the police and the prosecutors are slow here in Brazil, imagine what communications are like between police forces internationally,” he said.

Human trafficking is extremely lucrative. In Europe alone it generates some 3.2 billion dollars a year, according to speakers at the meeting.

The United Nations Office on Drugs and Crime (UNODC) says there are at least 2.5 million victims of human trafficking worldwide. A survey by UNODC found that 58 percent of respondents were victims of sexual exploitation and 36 percent of slave labour.