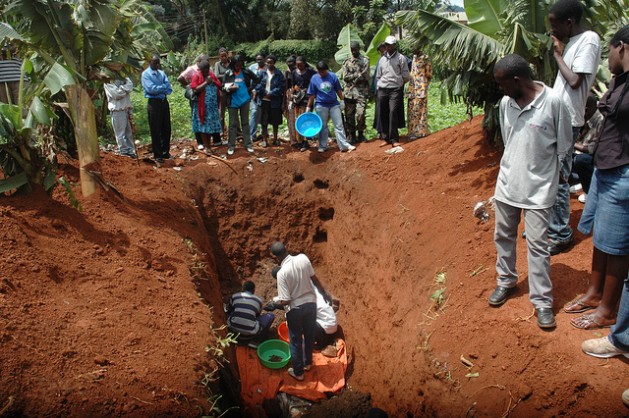 UNITED NATIONS, Jan 15 2014 (IPS) - On Jan. 11, 1994, Romeo Dallaire, force commander of the United Nations Mission in Rwanda, sent a fax to U.N. Headquarters in New York, telling officials there a source close to the government had confided to him that Tutsis were being forced to register themselves in Kigali.

“He suspects it is for their extermination,” wrote Dallaire.

“Having 26,000 people running around [DRC] just with a rifle doesn’t mean you are going to actually have a solution." -- Romeo Dallaire

In five months, a million, mostly Tutsi, Rwandans would be dead, victims of a meticulously planned 100-day genocide unleashed by Hutu extremists after they shot down the plane of President Juvénal Habyarimana, fearful he would soon seal a lasting peace in the country.

On Wednesday in New York, the U.N. marks the sombre 20th anniversary of what most consider its greatest failure – and the lives that proved the price required to force peacekeeping into the 21st century.

“Twenty years ago, humanity turned itself inside out,” Dallaire told reporters Tuesday. “The international community did its best to ignore Rwanda. It wasn’t on their radar, it was of no self-interest, it had no strategic value.”

Simon Adams, executive director of the Global Centre for Responsibility to Protect, who joined Dallaire and Rwandan ambassador Eugene-Richard Gasana, said the genocide, along with ethnic cleansing in the Balkans, was a turning point for the U.N.

Eleven years after the genocide, in 2005, the U.N. launched the Responsibility to Protect (R2P) initiative, obliging states to protect their own population from mass killings and holding the international community accountable for taking collective action to prevent genocide.

“Without the tragedy of Rwanda, we wouldn’t have had the Responsibility to Protect,” Adams told IPS. “There’s no way that would have happened without the process of sad reflection afterwards and the utter failure of the U.N. in 1994.”

Yet in 2009, the U.N. came under heavy criticism for not doing more during the final months of the Sri Lankan civil war, when up to 40,000 civilians were killed in a conflict which had, for most purposes, already been decided.

A 2012 internal U.N. report echoed investigations from the 1990s, finding “the UN’s failure to adequately respond to events like those that occurred in Sri Lanka should not happen again. When confronted by similar situations, the UN must be able to meet a much higher standard in fulfilling its protection and humanitarian responsibilities.”

Still, U.N. peacekeeping missions now prioritise the protection of civilians and sovereignty no longer takes precedent when they are targeted. Today it is expected that peacekeeping operations, such as recent interventions in South Sudan and the Central African Republic, will receive Chapter Seven mandates, authorising peacekeepers to use force in order to prevent the deaths of non-combatants.

Dallaire’s mission had no such mandate.

Coming a year after the disastrous failed mission in Somalia, countries were hesitant to send troops to Rwanda. Even when Dallaire asked the U.S. to jam radio transmissions emitting instructions to kill, Washington declined, afraid doing so would violate Rwanda’s sovereignty.

Not only did the U.N. not heed Dallaire’s pleadings, but during the worst of the genocide, when seven Rwandans were being murdered every minute, the Security Council voted to cut its peacekeeping mission in the country by 90 percent.

Ordered to leave the country, Dallaire, along with several hundred soldiers, refused. They tried desperately to protect civilians, but the killing subsumed the ill-equipped and overwhelmed troops.

Only three weeks before Tutsi rebels took the capital and ended the genocide, the Security Council finally approved a French intervention force, but the 3,000 French troops soon after gave safe passage to fleeing interahamwe and Hutu soldiers, even allowing them to keep their weapons. Pursuit of the genocidaires continues today, both abroad and in the jungles of eastern Congo.

“History has judged the U.N. very harshly for its inaction in Rwanda, and we must learn the lessons of the past,” Adams told IPS.

In March 2013, the Security Council authorised the “U.N Force Intervention Brigade,” a rapid response force that aggressively and successfully pushed into submission the M23 rebels in Eastern Congo.

“The new force there, having offensive capabilities, is a significant departure from the mandates that were so restricted,” said Dallaire.

“Peacekeeping always suffers from a lack of rapid reaction,” said David Curran, lecturer in peacekeeping, peace building and conflict resolution at University of Bradford. “There is a strong need to examine concepts of rapid deployment.”

Curran says countries still complain about erratic mandates and many member states – mostly developing – are remiss to send soldiers on orders from a security council whose members offer few or none at all.

“Certain states, mainly from the non-aligned movement, find they are being pushed to provide peacekeepers in situations where there is little peace to keep,” Curran told IPS. “They say they are being given vague mandates pertaining to protection of civilians from the Security Council, which certainly has a majority of states who do not provide troops to peacekeeping operations.”

Dallaire says peacekeeping often is a question of money and resources, no more evident than in Congo missions, which for many years were seen as failures.

“Having 26,000 people running around there just with a rifle doesn’t mean you are going to actually have a solution,” Dallaire told reporters. “So until developed countries get reengaged in peacekeeping and peacemaking operations we will continue to have forces that are not necessarily effective on the ground but also we seem to also continue to have mandates that are so restricted.”

But, he added, there is “a whole new generation of conflict resolution in which peacekeepers can be deployed but with the ability to influence the situation and not stand there and observe it, report, a sort of referee without a red card.”

Dallaire spoke encouragingly of the recent deployment of troops from other missions to augment the peacekeeping force in South Sudan, which the Security Council voted to increase by 5,500 shortly before Christmas.

But Adams says the mission in South Sudan is tentative and unwilling to enforce its mandate. On Tuesday, gunfire burst through the walls of an UNMISS camp in Malakal but the U.N. did not report any engagement. Groups say 10,000 have died, many of them civilians.

“In the case of South Sudan, they have a responsibility to protect mandate, it’s written in there,” says Adams. “There’s no problem with doctrine, which is very different from 1994. I think what we see in South Sudan is a question of resourcing, political leadership and will.

“What we often lack in mass atrocity crime situations is not early warning but timely response,” he added.

Closer to Rwanda, Gasana said the interahamwe that the French let slip so easily through their grasp continue to operate as FDLR rebels in the Eastern Congo, and for that, celebrations were not yet in order.

“I don’t think that they’ve learned anything. MINUSCO’s been there 13 years. And everybody, all of us here, knows what FDLR represents and they are still there,” said Gasana. “But we learned a lesson, we are part of the U.N., we don’t want this to happen anymore and that’s why we contribute peacekeepers to see how we can do our duty and serve the people all over the world.”