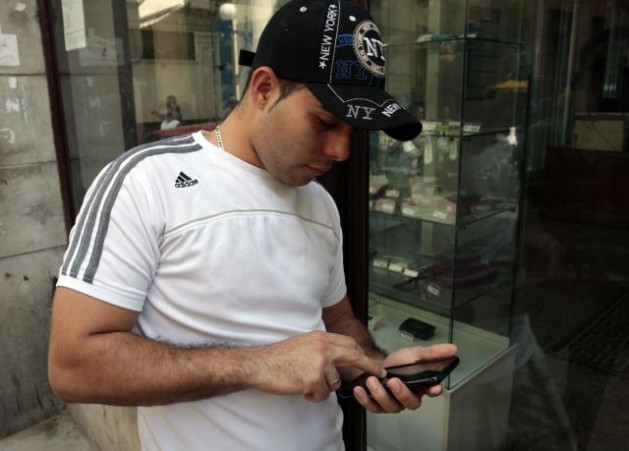 HAVANA, Apr 6 2014 (IPS) - The generations born in Cuba in the last two or three decades, permeated by the influences of societies that differ radically from the one their government is trying to build, are in the eye of the ideological storm that feeds the conflict between Havana and Washington.

On Thursday Apr. 3 the White House acknowledged that from 2009 to 2012, the United States Agency for International Development (USAID) was behind the ZunZuneo social network – the “Cuban Twitter” that targeted young people and reached a peak of 40,000 subscribers.

Its apparent aim was to destabilise and topple the government of Raúl Castro. But the programme came to an end when it ran out of funds.

“For the White House spokesman to say that it’s not a covert operation is simply a bald lie.” – Peter Kornbluh

“Young people today dislike equally pressure [from the Cuban government] to go to the May 1 march and calls, through text messages, to hold protests,” 29-year-old journalist Antonio Rodríguez, who decided to immigrate to the Unites States for economic reasons and to join his father, told IPS. “It’s the same idea: telling them to do what others want them to do.”

However, “young people are the main target [for this kind of activity] because they are always the ones who push forward social changes. Older people have preconceived notions, while young people are rebellious by nature and try to change things.

“But we are very busy dealing with economic difficulties, caught up in the day to day. The spirit of protest, of holding strikes, has been lost,” he added.

Miguel Castro, a 32-year-old self-employed worker, said that people who are today 25 years old are the children of the crisis that broke out in Cuba in 1991 with the collapse of the Soviet Union, which the Cuban economy depended on.

“Their political commitment to the historic generation [that experienced the 1959 revolution] has been injured; they haven’t seen the government update its discourse and adapt it to the reality and needs of the young,” he argued.

A study by the Centre for Psychological and Sociological Research found that “socio-political aspirations” continue to be important among university students, unlike among segments with lower levels of education or less skilled jobs, where political participation dropped to the bottom of their list of concerns.

Young people “are the perfect target group for this project which also benefited from the fact that it could be done remotely,” Latin America researcher Peter Kornbluh, of the Washington-based National Security Archive, which requests and publishes declassified U.S. government documents, told IPS.

“All of the good research on Cuban society points out that the younger generation is completely detached from the revolution. They’ve grown up almost entirely in this period – from the collapse of the Soviet Union onwards – they’ve never really seen the benefits of the Cuban revolution. They have an interest in communications and the modern world,” he added.

ZunZuneo – the term in Cuba for the noise made by “zunzunes” or hummingbirds – was based on text messages and took advantage of a Cuban problem: the restricted access to telecommunications and the Internet for the average Cuban, which the government blames on economic problems.

In May 2012, the authorities in Venezuela announced that the underwater fibre optic cable to Cuba was operational. But the Cuban government kept mum about it until January 2013, and an overall improvement in connectivity has not been noted.

The use of social networks has grown in Cuba since the government opened 145 Internet cafes, which offer connection to the worldwide web, international email service or the national web, depending on what the client pays for. And since March, cell-phone users can check their email using the domain @nauta.cu.

In this Caribbean island nation of 11.2 million people, as of mid-March there were two million people with cell-phones – more than the 1.27 million fixed lines, a density of just 28.9 per 100 inhabitants.

ZunZuneo was financed with 1.6 million dollars in funds that were publicly allocated to an unspecified USAID project in Pakistan.

The users never knew that a U.S. agency linked to the State Department was behind the network, or that the programme was gathering information to be used for political purposes in the future.

“This is a modern version of a CIA [Central Intelligence Agency] covert propaganda operation. In many ways, this is a classic covert operation with shell companies, cut-outs, multinational actors with companies in London and Spain and Managua, and hidden bank accounts,” said Kornbluh.

“For the White House spokesman [Jay Carney] to say that it’s not a covert operation is simply a bald lie. It looks like AID is the new CIA, particularly AID’s Office of Transitional Initiatives, which is a murky, mysterious entity clearly working covertly on regime change projects targeting Cuba,” he added.

The revelations about ZunZuneo were the result of an investigation published Thursday by the AP news agency, which created a considerable stir in the Cuban government and state-controlled media.

According to the AP report, the programme’s aim was to reach a critical mass of perhaps 200,000 subscribers, at which point political content would be introduced in the messages sent by ZunZuneo, in order to prompt Cubans to organise “smart mobs” – mass protests arranged via text message that could trigger a “Cuban spring”, a reference to the revolutions that broke out in 2011 in the Middle East.

In a statement to foreign correspondents to Cuba Thursday, Josefina Vidal, the head of the Foreign Ministry’s North American affairs division, said the ZunZuneo programme “shows once again that the United States government has not renounced its plans of subversion against Cuba.”

According to Kornbluh, USAID “gets 20 million dollars dumped into its coffers for its Cuba Democracy project every year, and it has to figure out creative ways to spend it.

“This was creative, but, in the end, it completely and utterly failed, just like the Alan Gross project failed,” he said, referring to the USAID contractor serving a 15-year sentence in Cuba for plotting against the state.

“This operation in hindsight looks silly except that its revelation right now threatens to undercut any momentum in Washington and Havana coming to a meeting of minds on better relations in the future,” Kornbluh stated.

With reporting by Ivet González in Havana and Jim Lobe in Washington.