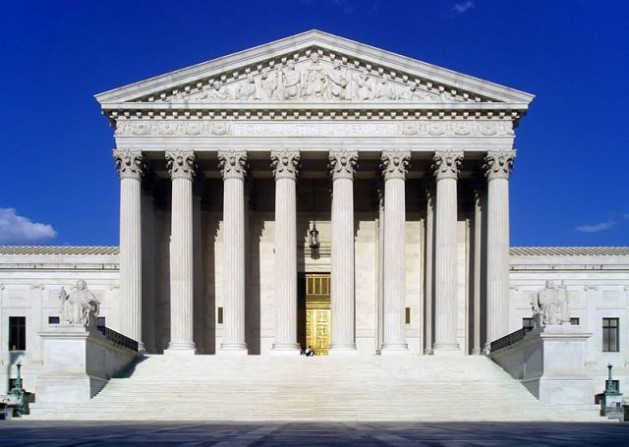 WASHINGTON, Apr 2 2014 (IPS) - In a decision with major implications for the U.S. political system, a bare majority of the Supreme Wednesday ruled that the government cannot limit total spending by individuals on federal elections.

“If the court in Citizens United opened a door, today’s decision may well open a floodgate.” -- Justice Stephen Breyer, writing for the minority.

That limit, which was 123,200 dollars for the current cycle, was enacted by Congress and signed into law by former President George W. Bush in 2002 as part of a larger effort to reform campaign finance laws.

The ruling in the case, McCutcheon v. Federal Election Commission (FEC), was strongly denounced by civic groups that have argued that the rich already exert far too much influence on elected officials.

“The Supreme Court majority overrode the Legislative and Executive branches to empower a miniscule number of millionaires and billionaires to use their wealth to exercise extraordinary distortive influence over federal officeholders, government decisions and elections,” said Fred Wertheimer, the president of Democracy 21 and a leading voice for taking money out of politics since the 1970s.

“The Supreme Court majority has refused to learn the lessons of history from our past corruption scandals and from decades of actions taken to protect citizens against government corruption,” he noted.

The ruling, which comes just as the 2014 Congressional campaigns are getting underway, is almost certain to fuel the growing debate over increasing economic inequality – ignited two-and-a-half years ago by the Occupy Movement – and its effects on the political system.

In just the past week, for example, op-eds decrying influence of money on government appeared in several of the nation’s most influential newspapers.

In the Washington Post, for example, Stein Ringen, an emeritus professor at Oxford University, compared the current U.S. system to that of ancient Athens where, he noted, “democracy disintegrated when the rich grew super-rich, refused to play by the rules and undermined the established system of government.”

Noting that, along with Adelson, two of the world’s other top-10 billionaires, David and Charles Koch, are already “pouring tens of millions [of dollars] into the 2014 midterm elections in an effort to swing the Senate to Republican control,” Post columnist Dana Milbank wrote Wednesday that “These and other wealthy people …are buying the U.S. political system in much the same way Russian oligarchs have acquired theirs.”

The McCutcheon decision, which drew a strong dissent from four of the justices on the nine-member court, complements the equally controversial “Citizens United” decision which the same majority handed down in 2010.

That decision found that limits to political contributions by corporations and unions violated the free speech rights guaranteed by the Constitution’s First Amendment. So long as those contributions were made to an entity that was not directly co-ordinating its advocacy work with a specific candidate’s political campaign or party, they were permissible, according to the majority.

As a substantial result of that decision, the 2012 election was the most expensive in U.S. history by far – most estimates place the amount at well over six billion dollars. In the 1960 election, by contrast, the comparable total was just over 100 million dollars adjusted for inflation.

While Citizens United applied to corporations and unions and permitted the creation of super-PACs to which anyone, such as Adelson and the Koch brothers, could contribute, it did not address the issue of direct donations by individuals to specific candidates or party organisations.

The McCutcheon case, which was based on a wealthy businessman who wanted to exceed the FEC’s 2012 aggregate limit by donating to dozens of Congressional campaigns, essentially fills that gap.

While the majority upheld FEC limits on individual contributions to specific candidates (2,600 dollars) and party organisations (5,000 dollars), it declared that the FEC’s aggregate limit (currently123,200 dollars) on any one individual’s contributions to political campaigns and parties during an election cycle violated the First Amendment.

“There is no right more basic than the right to participate in electing our political leaders,” wrote Chief Justice John Roberts in the majority opinion that drew heavily on the four-year-old Citizens United decision to establish precedent for its ruling.

The majority opinion provoked a strong retort by the four more-liberal justices. “If the court in Citizens United opened a door, today’s decision may well open a floodgate,” wrote Justice Stephen Breyer for the minority.

“The result… is a decision that substitutes judges’ understandings of how the political process works for the understanding of Congress; that fails to recognize the difference between influence resting upon public opinion and influence bought by money alone; that overturns key precedent; that creates huge loopholes in the law; and that undermines, perhaps devastates, what remains of campaign finance reform,” he argued.

His arguments were echoed by democracy advocates. “The First Amendment was intended to facilitate the exchange of ideas and information among all of us and thereby encourage our informed participation in our government,” said J. Gerald Hebert, director of the Legal Center here.

“This decision turns the First Amendment on its head by enabling those with the biggest chequebooks to gain even more influence and access to our elected officials,” he added.

The head of Public Citizen, another Washington-based civic group, called the ruling a victory for “plutocrat rights.” “There are literally only a few hundred people who can and will take advantage of this horrendous ruling. But those are exactly the people our elected officials will now be answering to,” said Robert Weissman.

“That is not democracy. It is plutocracy,” he said.

With the notable exception of Sen. John McCain, the 2008 Republican presidential candidate who had co-sponsored the 2002 campaign finance reform law, Republicans expressed satisfaction with the ruling.

For his part, McCain denounced the ruling. “I predict as a result of recent Court decisions, there will be scandals involving corrupt public officials and unlimited, anonymous campaign contributions that will force the system to be reformed once again,” he said in a statement.