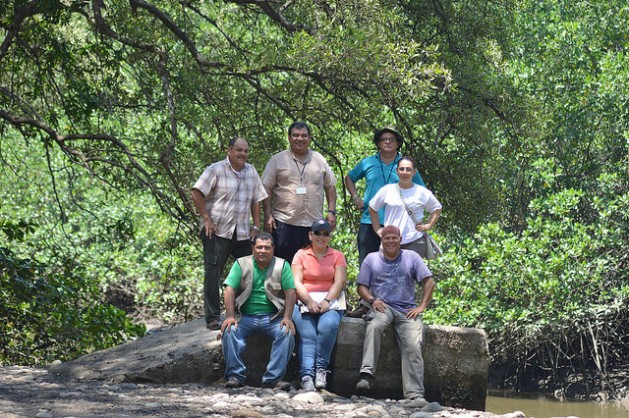 PUNTARENAS, Costa Rica, Jul 2 2014 (IPS) - Biologist Juan Sánchez drives the leader of two off-road vehicles along a dirt road in southeastern Costa Rica. Officials and experts are on their way to inspect a homestead whose owner has destroyed part of a mangrove swamp.

During the inspection of the wetland, 280 kilometres southeast of San José, he told IPS that for the past seven years he has been “chasing the bad guys”: companies and individuals who are harming natural resources in this Central American country of 4.5 million people.

The TAA was created in 1995 and is one of the foremost mechanisms in Costa Rica to combat destruction of the ecosystem. It depends on the Environment and Energy Ministry (MINAE), not the judicial branch.

It only has 20 officials to fulfil its remit of enforcing green justice.

“We have been relatively successful in the area of environmental administrative justice,” the TAA president, judge José Lino Chaves, told IPS.

In his view, “the TAA’s change of language and actions since 2008 has managed to warn Costa Ricans that we were doing something really wrong,” and that “caring for the environment is a priority” for the country.

One-quarter of Costa Rican territory is under some form of environmental protection, 53 percent is forested and it contains nearly four percent of the world’s biodiversity. The country promotes its natural wealth as its chief attraction and an asset to combat climate change.

The TAA is complemented by the Public Prosecutor’s Agrarian Environmental Office, which is also very short-staffed.

“I remember that a study carried out in the early 1990s found that 98 percent of the environmental offences reported were dismissed,” the former Environment minister (2002-2006), Carlos Manuel Rodríguez, told IPS.

At the time, “the (formal justice) system was inefficient, and according to the study the accused were acquitted because their responsibility could not be proved,” said Rodríguez, who is an environmental lawyer and a current vice president of Conservation International, an NGO.

“I don’t doubt the good intentions of the members” of the TAA, congressman and environmental lawyer Edgardo Araya, who won the legal battle against the Crucitas mining project in the national Dispute Tribunal, told IPS. “But the TAA as it stands is not viable; it lacks resources and judges.”

Álvaro Sagot, another environmental lawyer who won a pollution case against dairy giant Dos Pinos before the TAA, agreed about the lack of resources, but highlighted to IPS the value of the environmental court’s accessibility, as any person, with or without knowledge of the law, can bring a complaint.

Plaintiffs can also resort to the ordinary justice system. But Rodríguez said the criminal justice route is no use, because of lack of awareness. “I remember talking to judges who freed poachers arrested in national parks, because they did not consider this an offence,” he said.

One of the most famous TAA rulings was in September 2009, when it compelled the Panama registered vessel Tiuna to pay a fine of 668,000 dollars for tuna fishing in protected areas.

The environmental court assessed the value of the 280 tonnes of fish taken from the Coco Island National Park, off the western Pacific coast, and levied a proportionate fine.

Costa Rica has sought to build an international reputation as a “green country.” For years its slogan was “No Artificial Ingredients,” and in 2007 the government launched its “Peace With Nature” initiative, reaffirming Costa Rica’s commitment to the environment.

But cases are piling up in the TAA’s offices and Chaves himself admits that creating environmental awareness is a complex process.

The three judges are tasked with visiting all the affected zones to see for themselves the environmental damage in the field, in order to make their rulings.

On these field trips, judges and biologists alike wear mountain boots, protective cotton sunhats and machetes at their belts.

As well as inspecting specific cases, the TAA carries out “environmental sweeps,” their term for inspection tours lasting several days, with the purpose of putting a stop to ecological damage in a given territory.

The TAA has already halted 200 real estate projects on the Pacific coast and 40 on the Atlantic coast since the sweeps started in 2008, its president said.

But the “bad guys” do not give up. Only days after Sánchez’s inspection trip, another group of lawyers, experts and judges visited mangrove swamps in Puntarenas, in the Central Pacific region, 80 kilometres east of the provincial capital, to investigate another complaint.

They found a scene of devastation: 25 hectares of mangrove had been reduced to ashes by invaders who were already planting maize and sugarcane.

“They go on and on, and if we let them they would devour the whole zone. They burn down the mangroves and use the land for farming,” forest biologist Alexis Madrigal, the coordinator of TAA’s technical department, told IPS at the scene.

While members of the technical team removed the plastic bags the invaders used to mark their new plots, Chaves and the two lawyers with him considered possible next steps.

The first thing is a precautionary measure to halt the land invasion, followed by a ban on agricultural use of the land or an order to pay an indemnity, or both.

The TAA inspired the creation of three environmental courts in Chile, and Chaves shared the Costa Rican experience with the courts’ Chilean promotors.

The two systems are similar in that they both have three judges, one of whom must be a scientist; they have wide independence and are responsible for punishing environmental harm. Peru is making headway with a comparable initiative.

The main challenge faced by the TAA is expanding the number of its technical field staff as well as the lawyers in its San José headquarters, so that members of the legal team are not burdened with the unmanageable load of 600 case files each, as they are now.

It also needs stability. From 2012 to 2014, Chaves was vice minister of Water and Oceans at MINAE. He was able to secure improved budgets for the ATT, but its activities, especially the sweeps, declined.

In July, after a year and a half of less ambitious inspections, the TAA will undertake a tour in which MINAE, institutions like the National Environmental Technical Secretariat, the Water and Sanitation Institute and the security forces will also participate.

They are bound for the north of the country, where expansion of agriculture is threatening biodiversity and water for human consumption. In his San José office, judge Chaves smiles and says: “The environmental sweeps are back.”