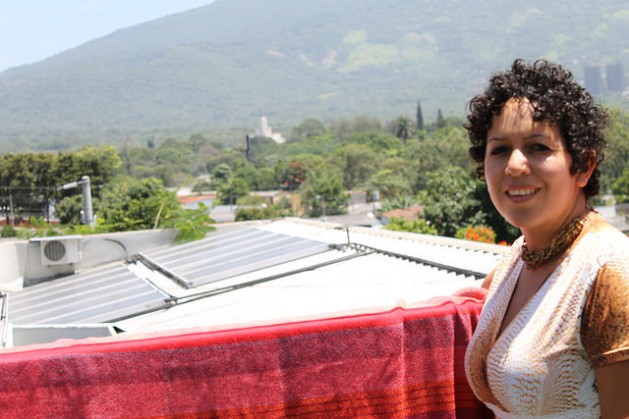 Carolina Baiza, coordinator of environmental projects at the Eco Hotel Árbol de Fuego, standing on the roof of the family business in San Salvador, in front of the hotel’s solar water heater. Credit: Edgardo Ayala/IPS

SAN SALVADOR, Jul 29 2014 (IPS) - El Salvador is making steady progress towards diversifying its energy sources, with a plan to bolster the use of cleaner sources and achieve a substantial change in its energy mix by 2018.

Projects involving clean energy, such as solar, are just getting underway in this Central American country. But they are gaining momentum and the first changes in the industry, until now heavily dependent on fossil fuels, are beginning to be seen.

El Salvador has traditionally depended on fuel oil and diesel, which account for 41 percent of power generation. But fluctuations in the cost of oil on the international market cause instability in prices.

Thermal energy produced by diesel and fuel oil is followed by hydroelectricity (31 percent of the total), geothermal energy (25 percent) and biomass (three percent), which is being developed by sugar mills that use bagasse or sugarcane residue that is burned for fuel in the mills’ steam boilers.

“The current energy mix is not in our best interests, as it is not diversified, and when oil prices go up, energy rates for consumers also rise,” said Carlos Nájera, director of development of renewable resources at the National Energy Council (CNE) – the government energy authority – in an interview with Tierramérica.

In 2011, the CNE established a new model for energy sales and purchases, which requires power companies to acquire 75 percent of the energy they distribute by means of long-term contracts, in order to reduce large swings in electricity rates.

“The current energy mix is not in our best interests, as it is not diversified, and when oil prices go up, energy rates for consumers also rise.” -- Carlos Nájera

That has brought down the cost for consumers by three cents of a dollar, to an average of 17 cents per kilowatt-hour.

Since 2009, when the left-wing Farabundo Marti National Liberation Front (FMLN) rebel group-turned-political party began to govern the country, the CNE has been leading the government effort to modify the energy mix, incorporating new technologies that are more efficient and cleaner.

The administration of President Salvador Sánchez Cerén, who took office in June, will keep in place a plan launched by his predecessor that set a target for just 15 percent of all power generation to come from fossil fuels by 2018, 26 percent less than today.

According to the plan, hydropower will make up 26 percent of the total, geothermal power 20 percent, and biomass two percent.

But the most novel aspect is that 35 percent of power generation is to come from natural gas, two percent from solar energy, and one percent from wind power.

“We are moving in the right direction to meet those targets,” Nájera said.

The most recent advance came in June, when an international consortium made up of the companies UDP Neoen-Almaval, UDP Proyecto La Trinidad and Solar Reserve Development were awarded contracts to supply 94 MW of solar energy.

With an investment of around 300 million dollars, the companies are to install solar plants to begin operating in October 2016, and run them for 20 years.

A total of 26 companies from France, Germany, Mexico, Spain and other countries took part in the public tender.

“We had a very good response from the companies that made bids, which means there is trust and confidence, as well as a capacity for supply,” Ingrid Chávez, manager of commercial planning in DelSur, told Tierramérica.

New smaller-scale projects are also in the pipeline.

One is the installation of the Planta Fotovoltaica 15 de Septiembre, a 14.2 MW solar power plant – the first of its kind, which is now being put up for tender. A similar 12 MW plant is also in the planning stage.

The aim is for 200 MW of solar energy to be produced by 2018, in order to meet the goal of two percent of the country’s electricity to come from solar power.

The June tender also included 40 MW of wind energy, but the two companies that offered bids charged more per MW than the price – 123 dollars – set by Siget, so no contract was granted.

In November 2013 a contract was awarded to a consortium formed by the local companies Quantum-Glu, to generate 355 MW using natural gas. The investment will amount to 900 million dollars.

The natural gas, which the companies will import, will alter the energy mix dominated by oil, and according to Siget will put this country at the forefront of cleaner energy generation in Central America.

And since it is less expensive to generate electricity using natural gas, the cost for consumers will be lower.

Another important element is the promotion of a culture of energy efficiency and savings.

In April, the CNE awarded prizes to several companies, large and small, and to government institutions that offered the best initiatives in energy efficiency, with a focus on environmental sustainability.

The Eco Hotel Árbol de Fuego was one of the winners.

The 19-room hotel, a family business, was paying a 1,300-dollar a month electric bill when it opened in 2001. But it later became involved in a project for saving electricity, water and gas, and began to work towards becoming more efficient and sustainable.

A solar water heater was installed, and the transformer and air conditioning systems were modified.

The hotel’s power bill has gone down 60 percent and the owners are making an effort to increase their savings, until reaching the recommended minimum usage, when they plan to install solar panels.

“We can’t go on to the photovoltaic energy stage until we’ve reached the maximum savings, but we’re moving in that direction,” the coordinator of the hotel’s environmental projects, Carolina Baiza, told Tierramérica.