ISTANBUL, Jul 29 2014 (IPS) - Among the labyrinth of winding narrow streets just outside a major shopping centre in the Kumkapi neighbourhood of Istanbul is a rundown road, congested with shops and apartments stacked atop one another. 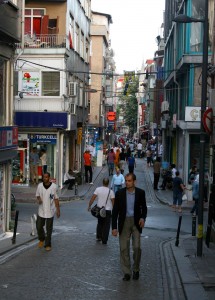 Istanbul’s “Somalia Street” – so called because immigrants from Somalia (and elsewhere in Africa) have adopted it as a staging post during long, rigorous journeys to find permanent homes. Credit: Hannah Tayson

Cars somehow manage to come barrelling down the street as people slowly move to the narrow pavement already full of food carts and clothes strewn out on blankets for sale. Trash lazily rolls past groups of men engaged in conversation while sitting on buckets or leaning against shop windows. The area feels oddly serene.

This street is host to a community of African refugees, with the majority comprising Somali natives, and aptly named “Somalia Street”. Through word of mouth and family ties, Somali refugees seek a temporary home in this nook of Istanbul, in order to find some respite from the political and natural disasters that have devastated Somalia for decades.

Istanbul has become a staging post for Somalis hoping to eventually travel on to Australia, Canada or the United States, migration trend watchers say.  Because of the constant population flux, it is difficult to estimate the number of refugees actually living on the street at any given moment, but street residents say that there are a few hundred Somalis living there.

Dalmar, 30, a Somali refugee, has only been in Istanbul for a month with his brother Amet, 20, and lives in a small apartment with 12 other refugees. This arrangement is very common here. Often, refugees will live in small apartments with 20 or 30 other people.

“Istanbul is very temporary,” said Dalmar. “The living conditions are poor. Istanbul is expensive, and it is very hard to find work here.”

Turkish labour laws require a passport and residence card for employment, neither of which refugees can easily obtain. This has led to much illegal work, usually consisting of manual labour and odd jobs.

Through word of mouth and family ties, Somali refugees seek a temporary home in this nook of Istanbul [Somalia Street], in order to find some respite from the political and natural disasters that have devastated Somalia for decades

A refugee who has lived in Turkey for many years, Liban, 31, said he worked in various manual labour jobs when he first arrived in Istanbul. He pointed out that that the language barrier between Arabic and Turkish makes it “difficult to get jobs in the first place.”

Yet inhabitants appear to have established a unique community along the littered, cobblestone street. Most Somalis interviewed said they enjoy life in Istanbul. The community takes care of them as they arrive in droves. Often, refugees will find work with Kurdish shop owners, who seem rather protective of them.

During one interview with a group of refugees, a Kurdish man popped his head of his shop out to make sure they were not being harassed.

The Katip Kasim mosque stands on Somali Street, its low brick wall recently painted white and orange. The mosque is rather unassuming compared to the grandiose and elegant mosques around Istanbul.

Muammer Aksoy has worked as Katip Kasim’s imam for 19 years, and has seen the community change significantly. This area of Istanbul has always been a refuge for minority groups in Istanbul, beginning with Kurdish migrants from Turkey’s east. Romanian refugees arrived in the 1980s and 1990s. There has since been an increase in African refugees to the area, the majority arriving within the last five years.

During the holy month of Ramadan, Somalia Street unites. Somalis are very devout Muslims. Once the sun begins to set, the Katip Kasim mosque courtyard fills with people waiting in line to receive their dinner to break the fast, or iftar.

Imam Aksoy began the community iftar dinners eight years ago, after seeing a Somali refugee attempt to break his fast with a small piece of bread, and by drinking soiled water from the fountains used to wash feet before entering the mosque.

“It is my responsibility as the imam to take care of my community,” said Aksoy. “I don’t discriminate between people here. Everyone is welcome.”

The imam has enlisted a different shop owner on the street each evening to provide the iftar dinner for 300 people.

A long-time resident and family friend of the imam, Arzu, has also seen the change in the community. “Refugees come because they heard people take care of them here,” she said proudly.

Turkey and Somalia have an unlikely partnership. According to a 2013 report by the Norwegian Peace Building Centre, Turkey has established networks in Africa, Somalia in particular, to enable peace-building efforts and humanitarian initiatives. In turn, says the report, this “strengthens Turkey’s international image as a global peace actor.”

“The relationship between Somalia and Turkey is very recent. It was just in 2011 that this relationship began,” said Dalmar. “Now there are scholarships and programmes for students.”

Somalia receives more aid from Turkey than any other African nation, with 93 million dollars in 2011, and 1,500 Somali students received scholarships to study at the public Istanbul University in 2013.

Abdifitah, 25, who has been living in the community for one year, was a scholarship recipient. To take advantage of the opportunity, Abdifitah and his family moved together from Somalia. His family cannot find work, but has moved with him in order to support him.

“Istanbul gave me a chance to learn,” said Abdifitah.

Recently, Somali refugees have been moving to Turkey’s capital, Ankara, because work is easier to find, and housing is cheaper than in overcrowded Istanbul.

Liban lives with his family in Ankara, but makes a living as a translator for the local African football league in Istanbul. When asked if he would like to go somewhere else, he shook his head.

“When I was younger, I really wanted to go to America. Now, if someone handed me an American passport, I wouldn’t take it,” said Liban. “I have everything I want here.”

Freelance writer Hannah Tayson was a foreign correspondent intern with the Institute for Education in International Media (ieiMedia) in Istanbul during the summer of 2014. She can be contacted at htayson@scu.edu