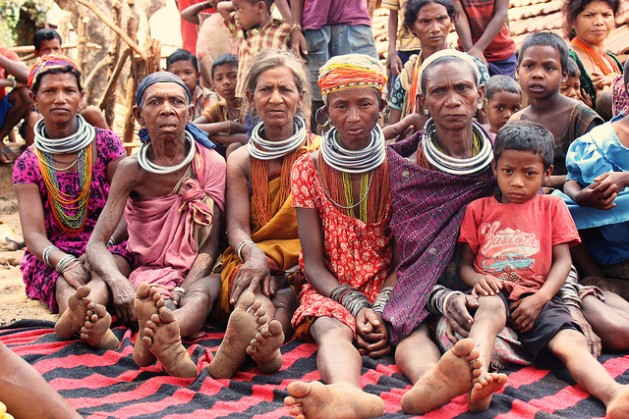 Bonda women in the remote Tulagurum Village in the eastern Indian state of Odisha seldom allow themselves to be photographed. Credit: Manipadma Jena/IPS

MALKANGIRI, India, Aug 19 2014 (IPS) - Scattered across 31 remote hilltop villages on a mountain range that towers 1,500 to 4,000 feet above sea level, in the Malkangiri district of India’s eastern Odisha state, the Upper Bonda people are considered one of this country’s most ancient tribes, having barely altered their lifestyle in over a thousand years.

Resistant to contact with the outside world and fiercely skeptical of modern development, this community of under 7,000 people is struggling to maintain its way of life and provide for a younger generation that is growing increasingly frustrated with poverty – 90 percent of Bonda people live on less than a dollar a day – and inter-communal violence.

“The abundant funds pouring in for the Bonda people's development need to be transparently utilised so that the various inputs work in synergy and show results." -- Dambaru Sisa, the first ever Upper Bonda to be elected into the state legislature in 2014
Recent government schemes to improve the Bonda people’s access to land titles is bringing change to the community, and opening doors to high-school education, which was hitherto difficult or impossible for many to access.

But with these changes come questions about the future of the tribe, whose overall population growth rate between 2001 and 2010 was just 7.65 percent according to two surveys conducted by the Odisha government’s Scheduled Castes and Scheduled Tribes Research and Training Institute (SCSTRTI).

In a windowless mud hut in the Bonda Ghati, a steep-sloping mountainous region in southwest Odisha, Saniya Kirsani talks loudly and drunkenly about his plans for the acre of land that he recently acquired the title to.

The 50-year-old Bonda man has illusions of setting up a mango orchard in his native Tulagurum village, which will enable him to produce the fruity liquor that keeps him in a state of intoxication.

His wife, Hadi Kirsani, harbours far more realistic plans. For her, the land deeds mean first and foremost that their 14-year-old son, Buda Kirsani, can finally go back to school.

He dropped out after completing fifth grade in early 2013, bereft of hopes for further education because the nearest public high school in Mudulipada was unaffordable to his family.

Since the mid 20th century, many Bonda families left their original lands and settled in the foothills of Malkangiri, where they have easier access to ‘mainstream’ services such as education and employment.

Known as the Lower or Plains Bondas, they are now found in as many as 14 of Odisha’s 30 districts due to rapid out-migration.

Upper and Lower Bondas have a combined total population of 12,231, registering a growth rate of 30.42 percent between 2001 and 2011 according to census data, compared to a low 7.65-percent growth rate among the Upper Bondas who remain on their ancestral lands.

The sex ratio among Upper Bonda people is even more skewed than in other tribal groups, with the female population outweighing males by 16 percent.

A 2009 baseline survey in Tulagurum village among the age group 0-six years found 18 girls and only three boys.

The Upper Bonda are one of 75 tribes designated as a Particularly Vulnerable Tribal Group (PTG) in India, including 13 in Odisha state alone.

Moreover, he would have had to walk 12 km, crossing hill ranges and navigating steep terrain, to get to his classroom every day.

Admission to the local tribal resident school, also located in Mudulipada, required a land ownership document that would certify the family’s tribal status, which they did not possess.

The Kirsani family had been left out of a wave of reforms in 2010 under the Forest Rights Act, which granted 1,248 Upper Bonda families land titles but left 532 households landless.

Last October, with the help of Landesa, a global non-profit organisation working on land rights for the poor, Buda’s family finally extracted the deed to their land from the Odisha government.

Carefully placing Buda’s only two sets of worn clothes into a bag, Hadi struggles to hold back the tears welling up in her eyes as she tells IPS that her son is now one of 31 children from the 44-household village who, for the first time ever, has the ability to study beyond primarily school.

She is not alone in her desire to educate her child. Literacy among Upper Bonda men is a miserable 12 percent, while female literacy is only six percent, according to a 2010 SCSTRTI baseline survey, compared to India’s national male literacy rate of 74 percent and female literacy of 65 percent.

For centuries, the ability to read and write was not a skill the Bonda people sought. Their ancient Remo language has no accompanying script and is passed down orally.

As hunters and foragers, the community has subsisted for many generations entirely off the surrounding forests, bartering goods like millet, bamboo shoots, mushrooms, yams, fruits, berries and wild spinach in local markets.

Up until very recently, most Upper Bondas wove and bartered their own cloth made from a plant called ‘kereng’, in addition to producing their own brooms from wild grass. Thus they had little need to enter mainstream society.

But a wave of deforestation has degraded their land and the streams on which they depend for irrigation. Erratic rainfall over the last decade has affected crop yields, and the forest department’s refusal to allow them to practice their traditional ‘slash and burn’ cultivation has made it difficult for the community to feed itself as it has done for hundreds of years.

Mainstreaming: helping or hurting the community?

Since 1976, with the establishment of the Bonda Development Agency, efforts have been made to bring the Upper Bonda people into the mainstream, providing education, better sanitation and drinking water facilities, and land rights.

“Land ownership enables them to stand on their own feet for the purpose of livelihood, and empowers them, as their economy is predominantly limited to the land and forests,” states India’s National Commission for Scheduled Tribes (NCST), a key policy advisory body.

Efforts to mainstream the Bonda people suffered a setback in the late 1990s, when left-wing extremists deepened the community’s exclusion and poverty by turning the Bonda mountain range into an important operating base along India’s so-called ‘Red Corridor’, which stretches across nine states in the country’s central and eastern regions and is allegedly rife with Maoist rebels.

“Upon completion, the ‘5000-hostel scheme’ will provide half a million tribal boys and girls education and mainstreaming,” he told IPS on the sidelines of the launch of Plan International’s ‘Because I Am A Girl’ campaign in Odisha’s capital, Bhubaneswar, last year.

The state’s 9.6 million tribal people constitute almost a fourth of its total population. Of these tribal groups, the Upper Bonda people are a key concern for the government and have been named a Particularly Vulnerable Tribal Group (PTG) as a result of their low literacy rates, declining population and practice of pre-agricultural farming.

Social activists like 34-year-old Dambaru Sisa, the first ever Upper Bonda to be elected into the state legislature in 2014, believe mainstreaming the Bonda community is crucial for the entire group’s survival.

Orphaned as a child and educated at a Christian missionary school in Malkangiri, Sisa now holds a double Masters’ degree in mathematics and law, and is concerned about his people’s future.

“Our cultural identity, especially our unique Remo dialect, must be preserved,” he told IPS. “At the same time, with increased awareness, [the] customs and superstitions harming our people will slowly be eradicated.”

He cited the Upper Bonda people’s customary marriages – with women generally marrying boys who are roughly ten years younger – as one of the practices harming his community. 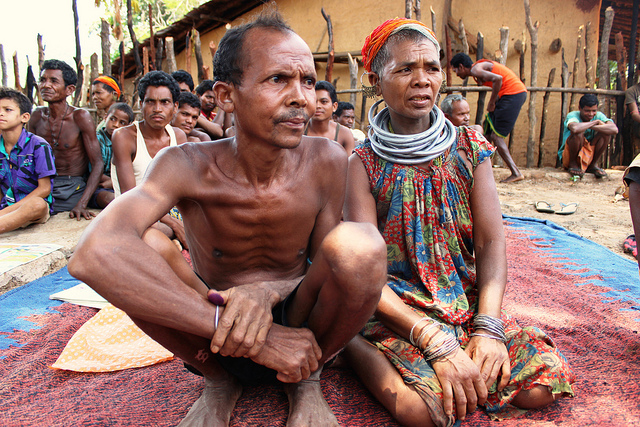 In customary marriages, Bonda women marry boys who are seven to 10 years their junior. Typically, a 22-year-old woman will be wed to a 15-year-old boy. Credit: Manipadma Jena/IPS

Women traditionally manage the household, while men and boys are responsible for hunting and gathering food. To do so, they are trained in archery but possession of weapons often leads to brawls within the community itself as a result of Bonda men’s quick tempers, their penchant for alcohol and fierce protection of their wives.

A decade ago, an average of four men were killed by their own sons or nephews, usually in fights over their wives, according to Manoranjan Mahakul, a government official with the Odisha Tribal Empowerment & Livelihood Programme (OTELP), who has worked here for over 20 years.

Even now, several Bonda men are in prison for murder, Mahakul told IPS, though lenient laws allow for their early release after three years.

The tribe’s drinking water is sourced from streams originating in the hills. All families practice open defecation, usually close to the streams, which results in diarrhoea epidemics during the monsoon seasons.

Despite a glaring need for change, experts say it will not come easy.

“Getting Bonda children to high school is half the battle won,” Sisa stated. “However, there are question marks on the quality of education in residential schools. While the list of enrolled students is long, in actuality many are not in the hostels. Some run away to work in roadside eateries or are back home,” he added.

The problem, Sisa says, is that instead of being taught in their mother tongue, students are forced to study in the Odia language or a more mainstream local tribal dialect, which none of them understand.

The government has responded to this by showing a willingness to lower the required qualifications for teachers in order to attract Bondas teachers to the classrooms.

Still, more will have to be done to ensure the even development of this dwindling tribe.

“The abundant funds pouring in for Bondas’ development need to be transparently utilised so that the various inputs work in synergy and show results,” Sisa concluded.