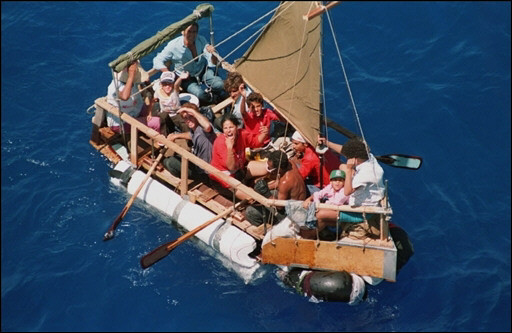 Cubans anxious to leave the island used a sometimes bizarre range of materials to build makeshift rafts in their attempt to reach the United States, during the August 1994 balsero crisis. Credit: Creative commons

HAVANA, Aug 6 2014 (IPS) - Tears, silence and evasive responses are the reactions from Cubans when they are asked about the “balseros” or rafters crisis; two decades after an exodus without parallel in Latin America, it remains a taboo subject in this Caribbean island nation.

Balseros was the term coined at the time to refer to those who set out for the United States from Cuba in improvised ‘balsas’ or rafts – a dangerous route that began to be used in 1961 and saw a flood of rafters in August 1994.

And Cubans are still making the hazardous journey by sea, even though local immigration laws were reformed in 2013.

“The balseros aren’t talked about here in the press [a state monopoly],” 66-year-old Frank López, who witnessed the last big exodus, told IPS. “People who know something found out from the antenna,” he added, referring to clandestine access to foreign TV stations.

According to the U.S. Coast Guard, the flow of people leaving Cuba by sea is now stable. Although the two countries are only 90 miles (145 kilometres) apart, many Cubans are now using more complex routes through places like Mexico, the Cayman Islands or Puerto Rico.

Around 1,271 balseros were intercepted at sea in the period October 2012 to September 2013, compared to 1,275 who were seized and sent back to Cuba from October 2011 to September 2012, in compliance with the bilateral agreements signed by the U.S. and Cuba.

The Cuban Adjustment Act, which has been in effect in the United States since 1966 and grants Cuban immigrants U.S. residency one year and a day after reaching the country, regardless of whether their entry was legal or undocumented, is a touchy question in the bilateral conflict.

Havana says the law foments illegal emigration from the island while Washington argues that it responds to the discontent in Cuba over the policies of the socialist government in power since 1959.

But that situation had little to do with the turbulent summer of 1994, when more than 36,000 Cubans took to the sea in fishing boats or on flimsy homemade rafts constructed with wood and inner tubes and propelled by motors or simply rowed.

The number of Cubans trying to cross the Florida Straits had begun to rise in early 1994, and tension grew between the two governments, which do not have formal diplomatic ties and have been distanced over the U.S. embargo against Cuba in place since 1962.

In July and early August, groups of Cubans hijacked at least four government-owned boats, in both successful and failed attempts to reach the United States.

This formed the backdrop to serious disturbances in Havana on Aug. 5, known as the “Maleconazo” – the first in Cuba in three decades.

Then-President Fidel Castro (1959-2008) told the U.S. administration of Bill Clinton (1993-2001) that if it did not take measures to discourage the wave of hijackings and departures by sea, the Cuban government would stop preventing them.

Castro argued that the exodus was fuelled by the fact that balseros were welcomed and assisted, while the U.S. government failed to live up to the commitment, agreed by the two governments in 1984, to provide visas to 20,000 Cubans a year.

The balsero crisis is seen as starting on Aug. 12, when Castro ordered the Coast Guard in Cuba to stop patrolling and preventing departures by sea, after another incident with a boat. The controls were reinstated on Sept. 13, after talks were launched by the two governments.

Many Cubans who lived through that period say they were marked forever.

“Crowds would gather on the coast to see off those who were leaving,” López said. “I went to the pier at Cojímar [a Havana suburb] to see it for myself, instead of listening to other people’s versions.”

Among the many things that made an impression on him were signs reading “rafts for sale”, hanging on houses, the steady stream of vehicles arriving, carrying homemade rafts, and the groups of people getting ready to make the 90-mile journey.

In a conversation with IPS in Miami, Florida, Clara Domínguez said she has never regretted having set out on Aug. 21, 1994 with her husband and son from the Havana shore, even though she knew that all the balseros who were intercepted would be held in the U.S. navy base in Guantánamo, in eastern Cuba. 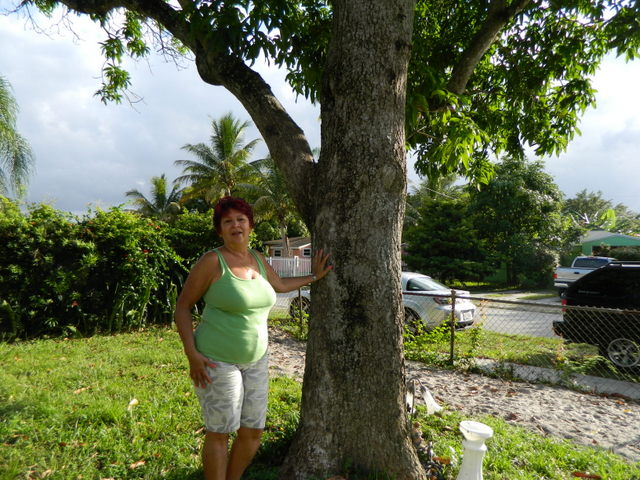 Clara Domínguez, a ‘balsera’ who left Cuba on Aug. 21, 1994 along with her husband and son, in her yard on the Miami, Florida street where she lives now. Credit: Ivet González/IPS

In that base and in similar installations in Panama and the Krome Refugee Camp in Florida, the Clinton administration held thousands of Cuban migrants to decide what to do with them. They were kept there in a kind of limbo that lasted two years.

Cuba agreed to allow them to come back if they wanted to, in the first bilateral agreement reached, on Sept. 9, which some rafters took advantage of. But most of them staked their bets on the uncertain outcome of the talks between the two governments, which finally came in May 1995, when Washington gradually began to issue visas on humanitarian grounds.

The crisis formally ended in January 1996, when the last refugee left Guantánamo.

Unable to hold back her tears, Domínguez said the date was “a disgraceful anniversary”. “We had to leave Cuba because of the lack of freedom and opportunities,” the 68-year-old woman said.

After the Soviet Union, Cuba’s main aid and trade partner, collapsed in 1991, this country fell into an economic depression from which it has not yet emerged.

For Domínguez, the most positive aspect of the agreements reached in 1994 and 1995 was that the United States began to issue a minimum of 20,000 visas a year to prioritise safe, legal, and orderly immigration.

The most tragic face of the exodus, from not only Cuba but from the Dominican Republic and Haiti as well, is the number of people who die and go missing every year in the turbulent shark-infested waters of the Florida Straits, where networks of drug and people traffickers operate as well.

Nancy Reyes, 74, has had no news of her only son since 1992. “I only heard he was leaving the country. I live with that uncertainty,” Reyes, who lives in the city of Matanzas, 87 km east of Havana, told IPS.

The fight against illegal emigration and people smuggling has been a fixture on the agenda of the talks which have been going on since then, with ups and downs, between Havana and Washington.

“It would be very unlikely for a similar crisis to break out again,” researcher Antonio Aja told IPS.

There are two key factors influencing departures by sea: the internal situation in Cuba and U.S. compliance with the immigration accords, according to studies cited by Aja.

In 2013 Cuba’s immigration laws were reformed, making it easier to leave and come back to Cuba. Meanwhile, the U.S. Interests Section in Havana began to issue five-year multiple-entry visas to Cubans who are approved for non-immigrant travel to the United States.

A year earlier, according to official figures, 46,662 people emigrated from this country of 11.2 million. But these days most of them leave by plane.