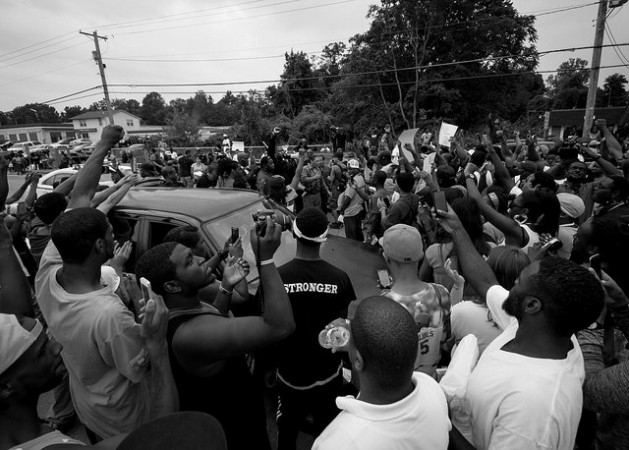 "Hands Up, Don't Shoot": A rally in support of Michael Brown. Credit: Shawn Semmler/cc by 2.0

WASHINGTON, Aug 18 2014 (IPS) - The shooting of an unarmed black teenager by a white police officer in the southern United States earlier this month has led to widespread public outrage around issues of race, class and police brutality.

In particular, a flurry of policy discussions is focusing on the startling level of force and military-style weaponry used by local police in responding to public demonstrations following the death Aug. 9 of 18-year-old Michael Brown in Ferguson, Missouri.

“We have a lot of military equipment and hardware looking for a place to end up, and that tends to be local law enforcement.” -- WOLA's Maureen Meyer

The situation has galvanised support from both liberal and conservative members of Congress for potential changes to a law that, since the 1990s, has provided local U.S. police forces with surplus military equipment. The initiative, overseen by the Department of Defence and known as the “1033 programme”, originally came about in order to support law-enforcement personnel in the fight against drug gangs.

“We need to de-militarise this situation,” Claire McCaskill, one of Missouri’s two senators, said last week. “[T]his kind of response by the police has become the problem instead of the solution.”

In a widely read article titled “We Must Demilitarize the Police”, conservative Senator Rand Paul likewise noted that “there should be a difference between a police response and a military response” in law enforcement.

During attempts to contain public protests in the aftermath of the shooting, police in Ferguson used high-powered weapons, teargas, body armour and even armoured vehicles of types commonly used by the U.S. military during wartime situations. Now, it appears the 1033 programme will likely come under heavy scrutiny in coming months.

“[W]e will review this programme to determine if equipment provided by the Defense Department is being used as intended.”

Despite this unusual bipartisan agreement over the dangers of a militarised police force, there appears to be no extension of this concern to rising U.S. support for militarised law enforcement in other countries.

While a 2011 law requires annual reporting on U.S. assistance to foreign police, that data is not yet available. However, during 2009, the most recent data available, Washington provided more than 3.5 billion dollars in foreign assistance for police activities, particularly in Afghanistan, Colombia, Iraq, Mexico, Pakistan and the Palestinian Territories.

According to an official report from 2011, “the United States has increased its emphasis on training and equipping foreign police as a means of supporting a wide range of U.S. foreign-policy goals,” particularly in the context of the wars on drugs and terrorism.

In the anti-terror fight, African countries are perhaps the most significant recipients of new U.S. security aid. Yet a new report from Human Rights Watch (HRW) highlights the dangers of this approach, focusing on the U.S.-supported Anti-Terrorism Police Unit (ATPU) in Kenya.

The report, released Monday, builds on previous allegations against the ATPU of arbitrary arrests, enforced disappearances and extrajudicial killings. Yet neither the Kenyan authorities nor the ATPU’s main donors – the United States and United Kingdom – have seriously investigated these longstanding allegations, HRW says.

Washington’s support for the ATPU has been significant, amounting to 19 million dollars in 2012 alone. Yet while U.S. law mandates a halting of aid pending investigation of credible reports of rights abuse, HRW says Washington “has not scaled down its assistance to the unit”.

“The goals of supporting the police in general are laudable and in line with concerns over rule of law,” Jehanne Henry, a senior researcher with HRW’s Africa division, told IPS.

“The problem here is it’s clear that, notwithstanding the goals of the assistance, it’s serving to undermine rule of law because the ATPU is taking matters into its own hands. So, our call is for donors to be smarter about providing this kind of assistance.”

Meanwhile, Mexico and Latin American countries have been seeing an uptick in U.S. assistance for security forces as part of efforts to crack down on the drug trade.

“Currently the Central American governments are relying more and on their militaries to address the recent surge in violence,” Adriana Beltran, a senior associate for citizen security at the Washington Office on Latin America (WOLA), a watchdog group here.

“While the U.S. is saying it’s not providing any assistance to these forces, there is significant assistance being provided through the Department of Defence for counter-narcotics, which is channelled through the militaries of these countries.”

According to a new paper from Alexander Main, a senior associate at the Center for Economic and Policy Research (CEPR), a think tank here, U.S. security assistance to the region began strengthening again during the latter years of President George W. Bush’s time in office.

“Funding allocated to the region’s police and military forces climbed steadily upward to levels unseen since the U.S.-backed ‘dirty wars’ of the 1980s,” Main writes, noting that a “key model” for bilateral assistance has been Colombia. Since 1999, an eight-billion-dollar programme in that country has seen “the mass deployment of military troops and militarized police forces to both interdict illegal drugs and counter left-wing guerrilla groups”.

Yet last year, nearly 150 NGOs warned that U.S. policies of this type, which “promote militarization to address organized crime”, had been ineffective. Further, the groups said, such an approach had resulted in “a dramatic surge in violent crime, often reportedly perpetrated by security forces themselves.”

Mexico has been a particularly prominent recipient of U.S. security aid around the war on drugs.

“From the 1990s onward, the trend has been to encourage the Mexican government to involve the military in drug operations – and, over the past two years, also in public security,” Maureen Meyer, a senior associate on Mexico for WOLA, told IPS.

In the process, she says, civilian forces, too, have increasingly received military training, leading to concerns over human rights violations and excessive use of force, as well as a lack of knowledge over how to deal with local protests – concerns startlingly similar to those now coming out of Ferguson, Missouri.

“You can see how disturbing this trend is in the United States, and we are concerned about a similar trend towards militarised police forces in Latin American countries,” Meyer notes. “We have a lot of military equipment and hardware looking for a place to end up, and that tends to be local law enforcement.”