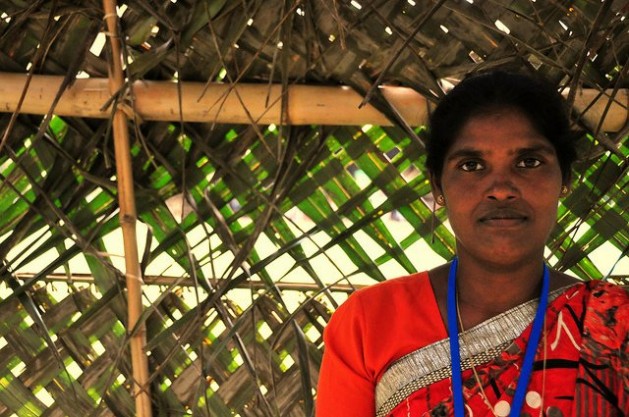 BALI, Aug 8 2014 (IPS) - Aleta Baun, an Indonesian environmental activist known in her community as Mama Aleta, has a penchant for wearing a colourful scarf on her head, but not for cosmetic reasons.

The colours of the cloth, she says, represent the hues of the forests that are the lifeblood of her Mollo people living in West Timor, part of Indonesia’s East Nusa Tenggara province.

“If I were a man, I would have been arrested and thrown in jail by now. Because we women stand together, police are reluctant to act like that.” -- Suryamani Bhagat, founder of the Torang tribal rights and cultural centre
The winner of the 2013 Goldman Environmental Prize, she represents an expanding international movement against environmental destruction helmed by humble, often poor, rural and tribal women.

For many years, Aleta has been at the forefront of her tribe’s efforts to stop mining companies destroying the forests of the Mutis Mountains that hug the western part of the island of Timor.

The Mollo people have long existed in harmony with these sacred forests, living off the fertile land and harvesting from plants the dye they use for weaving – a skill that local women have cultivated over centuries.

Starting in the 1980s, corporations seeking to extract marble from the rich region acquired permits from local officials, and began a period of mining and deforestation that caused landslides and rampant pollution of West Timor’s rivers, which have their headwaters in the Mutis Mountains.

The villagers living downstream bore the brunt of these operations, which they said represented an assault on their way of life.

So Mama Aleta, along with three other indigenous Mollo women, started traveling by foot from one remote village to the next, educating people about the environmental impacts of mining.

During one of these trips in 2006, Aleta was assaulted and stabbed by a group of thugs who waylaid her. But the incident did not sway her commitment.

“I felt they were raping my land, I could not just stand aside and watch that happen,” she told IPS.

The movement culminated in a peaceful ‘occupation’ of the contested mountain, with Aleta leading some 150 women to sit silently on and around the mining site and weave traditional cloth in protest of the destruction.

“We wanted to tell the companies that what they were doing was like taking our clothes off, they were making the forest naked by [cutting down] its trees,” she said.

A year later, the mining groups were forced to cease their operations at four sites within Mollo territory, and finally give up on the enterprise altogether. 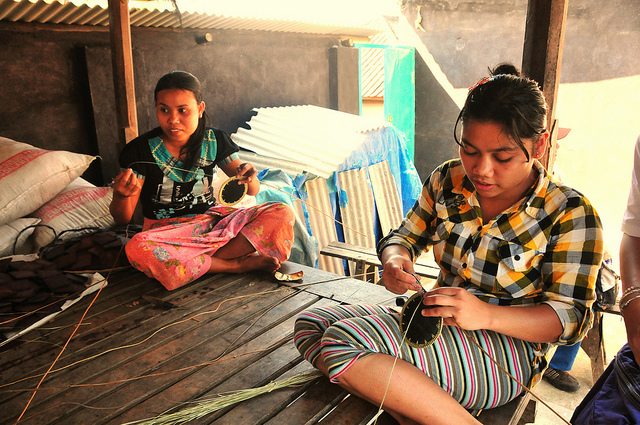 Increasingly, women like Aleta are taking a front seat in community action campaigns in Asia, Africa and Latin America aimed at safeguarding the environment.

The United Nations Framework Convention on Climate Change (UNFCCC) estimates that women comprise one of the most vulnerable populations to the fallout from extreme weather events.

In addition, small-scale female farmers (who number some 560 million worldwide) produce between 45 and 80 percent of the world’s food, while rural women, primarily in Asia and sub-Saharan Africa, spend an estimated 200 million hours per day fetching water, according to UN Women. Any change in their climate, experts say, will be acutely felt.

According to Lorena Aguilar, senior gender advisor with the International Union for the Conservation of Nature (IUCN), in some parts of rural India women spend 30 percent of their time looking for water. “Their role and the environment they live in have a symbiotic connection,” she said.

In the eastern Indian state of Jharkhand, Suryamani Bhagat, founder of the Torang tribal rights and cultural center, is working with women in her village of Kotari to protect the state’s precious forests.

Working under the umbrella of the Jharkhand Save the Forest Movement (known locally as Jharkhand Jangal Bachao Andolan), Bhagat initially brought together 15 adivasi women to protest attempts by a state-appointed forest official to plant commercially viable timber that had no biodiversity or consumption value for the villagers who live off the land.

The women then went to the local police station – accompanied by children, men and elders from the village – and began to pluck and eat the fruit from guava trees in the compound, announcing to the officers on duty that they wanted only trees that could provide for the villagers.

On another occasion, when police showed up to arrest women leaders in the community, including Bhagat, they announced they would go voluntarily – provided the police also arrested their children and livestock, who needed the women to care for them. Once again, the police retreated.

Now the women patrol the forest, ensuring that no one cuts more wood than is deemed necessary.

Bhagat believes that her gender works to her advantage in this rural community in Jharkhand’s Ranchi district.

“If I were a man, I would have been arrested and thrown in jail by now,” she told IPS. “Because we women stand together, police are reluctant to act like that.”

Over 7,000 km away, in the Pacific island state of Papua New Guinea, Ursula Rakova is adding strength to the women-led movement by working to protect her native Carteret Atoll from the devastating impacts of climate change.

The tiny islands that comprise this atoll have a collective land area of 0.6 square kilometers, with a maximum elevation of 1.5 metres above sea level.

For nearly 20 years, locals here have battled a rising sea that has contaminated ground water supplies, washed away homes and made agriculture virtually untenable.

The National Tidal Centre at the Australian government’s bureau of meteorology has been unwilling to provide long-term projections for the atoll’s future, but various media outlets report that the islands could be completely submerged as early as 2015.

In 2006, at the request of a local council of elders, Rakova left a paid job in the neighbouring Bougainville Island and returned to her native Carteret, where she helped found Tulele Peisa, an NGO dedicated to planning and implementing a voluntary relocation plan for residents in the face of government inaction.

The organisation advocates for the rights of indigenous islanders, and seeks economic alternatives and social protections for families and individuals forced to flee their sinking land.

“It is my island, my people, we will not give up on them,” Rakova told IPS. “It is our way of life that is going under the sea.”

All three women are ordinary mothers, who have taken extraordinary steps to make sure that their children have a better world to live in, and that outsiders, who have no sense of their culture or traditions, do not dictate their lives.

Of course this is nothing new. Michael Mazgaonkar, an India-based coordinator and advisor for the Global Greengrants Fund (GGF), told IPS that women have always played an integral role in environmental protection.

What is new is their increasing prominence on the global stage as fearless advocates, defenders and caretakers.

“The expanding role of women as climate leaders has been gradual,” Mazgaonkar stated. “In some cases they have been thrust forward, because they had no choice but to take action, and in others they have volunteered to play a leadership role.”

While the outcome of many of these campaigns hangs in the balance, one thing is for certain, he said: that the world “will continue to see their role becoming more pronounced.”

GFF Executive Director Terry Odendahl believes that “men are doing equally important work” but added: “historically women and their roles have been undervalued. We need to create the space for their voices to be heard.”

“If we raise women’s choices,” she said, “We can improve this dire environmental predicament we are faced with.”