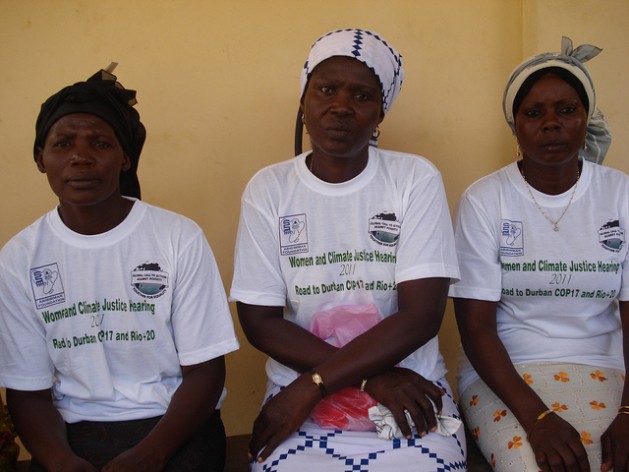 YAOUNDE, Sep 29 2014 (IPS) - As climate change interest groups raise their voices across Africa to call for action at the COP20 climate meeting in December and the crucial COP21 in Paris in 2015, many worry that the continent may never have fair representation at the talks.

The African Group noted during a May meeting in Ethiopia that while negotiations remain difficult, they still hope to break some barriers through close collaboration and partnerships with different African groups involved in negotiations.

"Most of our problems are financial. For example, in negotiations Cameroon is seated next to Canada, which comes with a delegation of close to a hundred people, while two of us represent Cameroon." -- lead negotiator Tomothé Kagombet

Within the Central African Forest Commission (COMIFAC) group, a preparatory meeting is planned for next month with experts and delegates from the 10 member countries, according to Martin Tadoum, deputy secretary general of COMIFAC, “but the group can only end up sending one or two representatives to COP meetings.”

Meanwhile, the Pan-African Parliamentarians’ Network on Climate Change (PAPNCC) is hoping to educate lawmakers and African citizens on the problem to better take decisions about how to manage it.

“The African parliamentarians have a great role to influence government decisions on climate change and defend the calls of various groups on the continent,” Honorable Awudu Mbaya, Cameroonian Parliamentarian and president of PAPNCC, told IPS.

PAPNCC operates in 38 African countries, with its headquarters in Cameroon. Besides working with governments and decision-makers, it is also networking with youth groups and civil society groups in Africa to advance climate goals.

The United Nations Economic Commission for Africa (UNECA) has noted that bargaining by all parties is increasingly taking place outside the formal negotiating space, and Africa must thus be prepared to engage on these various platforms in order to remain in the loop.

Civil society organisations (CSOs) in Africa are designing various campaign strategies for COP 20 and COP 21. The Pan African Climate Justice Alliance (PACJA), a diverse coalition of more than 500 CSOs and networks, is using national platforms and focal persons to plan a PACJA week of activities in November.

“PACJA Week of Action is an Africa-wide annual initiative aimed at stimulating actions and reinforcing efforts to exercise the power of collective action ahead of COPs. The weeks will involve several activities like staging pickets, rallies, marches, and other forms of action in schools, communities, workplaces, and public spaces,” Robert Muthami Kithuku, a programme support officer at PACJA headquarters in Kenya, told IPS.

Others, like the African Youth Initiative on Climate Change (AYICC) and the African Youth Alliance, are coming up with similar strategies to provide a platform for coordinated youth engagement and participation in climate discussions and the post-2015 development agenda at the national, regional and international levels.

“We plan to send letters to negotiators, circulating statements, using the social media, using both electronic and print media and also holding public forums. Slogans to enhance the campaign are also being adopted,” Kithuku said.

Africa’s vulnerability to climate change seems to have ushered in a new wave of south-south collaboration in the continent. The PAPNCC Cameroon chapter has teamed up with PACJA to advocate for greater commitments on climate change through tree-planting events in four Cameroonian communities. It is also holding discussions with regional parliamentarians on how climate change can better be incorporated in local legislation.

In June, mayors of the Central African sub-region gathered in Cameroon to plan their first participation in major climate negotiations at COP21 in Paris. Under the banner The International Association of Francophone Mayors of Central Africa on Towns and Climate Change (AIMF), the mayors are seeking ways to adapt their cities to the effects of climate change and to win development opportunities through mitigating carbon dioxide emissions.

During a workshop of African Group of Negotiators in May 2014, it was recognised that climate change negotiations offer opportunities for Africa to strengthen its adaptive capacity and to move towards low-carbon economic development. Despite a lack of financial resources, Africa has a comparative advantage in terms of natural resources like forests, hydro and solar power potential.

At the May meeting, Ethiopia’s minister of Environment and Forests, Belete Tafere, urged the lead negotiators in attendance to be ambitious and focused in order to press the top emitters to make binding commitments to reduce emissions. He also advised the negotiators to prioritise mitigation as a strategy to demonstrate the continent’s contribution to a global solution.

But negotiations are still difficult. Africa has fewer resources to send delegates to COPs, coupled with a relatively low level of expertise to understand technical issues in the negotiations.

“Africa is just a representative in negotiations and has very little capacity to influence decisions,” Tomothé Kagombet, one of Cameroon’s lead negotiators, told IPS.

“Most of our problems are financial. For example, in negotiations Cameroon is seated next to Canada, which comes with a delegation of close to a hundred people, while two of us represent Cameroon, and this is the case with all other African countries.”

He said that while developed countries swap delegates and experts in and out of the talks, the Africans are also obliged remain at the negotiating table for long periods without taking a break.

“At the country levels, there are no preparatory meetings that can help in capacity building and in enforcing countries’ positions,” he said.

As a strategy to improve the capacity of delegates, COMIFAC recruits consultants during negotiations to brief representatives from the 10 member countries on various technical issues in various forums.

“To reduce the problem of numbers, the new strategy is that each country is designated to represent the group in one aspect under negotiation. For example, Chad could follow discussions on adaptation, Cameroon on mitigation, DRC on finance,” COMIFAC’s Tadoum told IPS.

With a complex international climate framework that has evolved over many years, with new mitigation concepts and intricacies in REDD (reducing emissions from deforestation), the Clean Development Mechanism (CDM), and more than 60 different international funds, the challenges for African experts to grasp these technicalities are enormous, Samuel Nguiffo of the Center for Environment and Development told IPS (CED). CED is a subregional NGO based in Cameroon.

“There is no country budget set aside for climate change that can help in capacity building and send more delegates to COPs. The UNFCCC sponsors one or two representatives from developing countries but the whole of Africa might not measure up with the delegates from one developed nation,” said Cameroon’s negotiator, Tomothé Kagombet.

The lead African negotiators are now crafting partnerships with with young African lawyers in the negotiations process and compiling a historical narrative of Africa’s participation and decisions relevant to the continent as made by the Conference of Parties (COP) to the UNFCCC process, from Kyoto in 1997 to Paris in 2015.