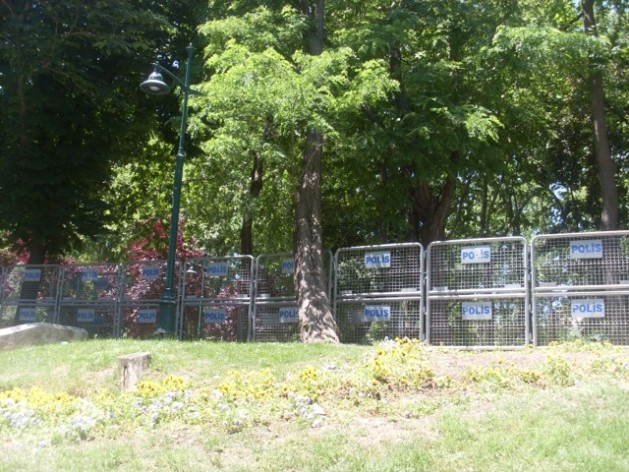 Police barricade in Gezi Park – one of the last green spaces in Istanbul’s Beyoğlu district and an “oasis” in Taksim Square, a large stone plaza of mostly open space with a few statues, fountains and entrances to underground stations (May 2013). Credit: Wikimedia Commons

ISTANBUL, Oct 14 2014 (IPS) - A year after the Gezi Park uprising – a protest that began as an act to save trees – exploded into anti-government riots around the country, sparking cohesive community efforts to fight urban sprawl, the face of environmental activism and awareness in Turkey has changed.

“It’s no coincidence that the demonstrations were ignited by an ecological issue, by concerns of urban development,” said Morat Ozbank, an assistant professor of political theory at Bigli University and a board member of the Turkish Green Party. “And this later became an issue of human rights and democratisation.”

At 11 pm on May 27, 2013, bulldozers moved into Gezi Park – one of the last green spaces in Istanbul’s Beyoğlu district and an “oasis” in Taksim Square, a large stone plaza of mostly open space with a few statues, fountains and entrances to underground stations.  They were there to clear the trees for the controversial construction of an Ottoman-era style shopping mall.

“The mega-projects are disastrous for Istanbul. All development is hurting something. Urban planning is a rational profession, but the government does not listen to this rationale. They take our public spaces and sell them for construction” – Akif Burak Atlar, secretary to the board at the Turkish Chamber of Urban Planners

Within 20 minutes, throngs of people filled the park to block the construction, and they stayed for 20 days before being forced out by police.

The proposed shopping mall was just one of a long list of mega-projects spearheaded by Turkish president Recep Tayyip Erdogan. Other projects include a third bridge across the Bosphorus, a tunnel for private vehicles beneath the same waterway, the world’s largest airport, and a second Bosphorus on the Asian side of the city.

Many of these projects are being carried forward despite opposition from bodies such as the Union of Chambers of Turkish Engineers and Architects (TMMOB), which is responsible for assessing the potential impact of proposed projects and advising against those that could be detrimental to the environment.

According to Akif Burak Atlar, secretary to the board at the Turkish Chamber of Urban Planners, all of these projects fit that description.

“The mega-projects are disastrous for Istanbul,” he says. “All development is hurting something. Urban planning is a rational profession, but the government does not listen to this rationale. They take our public spaces and sell them for construction.”

Atlar believes that every neighbourhood in Istanbul should legally have a certain amount of green space to uphold urban planning standards. Nevertheless, public parks are being destroyed and, beyond the city limits, miles of wild forests have been destroyed to make way for the third bridge and the second Bosphorus.

While all of these projects had elicited outcries from various small organisations and legal action from TMMOB before May 2013, nothing came close to the response at Gezi Park.

“Gezi was a unique moment is Turkish history,” says Atlar. “There was no leader, no formal organisation. It was an awakening.”

One year later, this movement is still alive and although policies regarding urban planning have not changed at governmental level, grassroots organisations have joined forces in the hope of making changes where they can.

One of these – Northern Forest Defence – is a movement organised by free volunteers to defend the last forests of northern Istanbul. Known as the “Child of Gezi,” it works to halt the development of mega projects like the third bridge, as well as working within small communities to stop the destruction of public parks for development.

While many of these efforts are small, Cigdem Cidamli, a founding member of the organisation, believes that they are essential to the progress of urban defence. “Small movements can’t change as much as big movements,” she says, “but we can’t have big movements without the small ones. So now we are trying to create more integrated channels of solidarity.”

Cidamli, Atlar and Ozbank all agree that the integration of organisations is the most recognisable accomplishment of Gezi so far. Many neighbourhoods now have an urban defence group to discuss a wide range of issues including urban development.

Many of these groups have come together to form larger organisations such as Taksim Solidarity, Istanbul Urban Defence and Northern Forest Defence.

One small group, Caferaga Dayanismasi, is a collective in the Kadikoy neighbourhood that conducts meetings and organises activist movements from a “squat” – an abandoned building that members have occupied and are renovating.

Bahadir, a member of the squat, says that the best thing they have done as a group is to have occupied and cultivated an empty lot that was going to be turned into a car park. Now it is a community vegetable garden where neighbours, both the young and the old, get their hands dirty.

Cidamli is thankful to Gezi for this development. “After Gezi, people are looking inward to create solidarity in small ways,” she says. “We can’t have Gezi every day. So, instead, we cultivate tomatoes.”

With this growth in community-minded activism, Bahadir says that the city cannot cut down a single tree without sparking a protest.

But so far, the only major development that has successfully been halted is the shopping mall at Gezi.

“The funny thing is, they can’t do anything in Taksim Square right now,” says Ozbank with a smile. “They can’t touch anything … not even to beautify the place.”