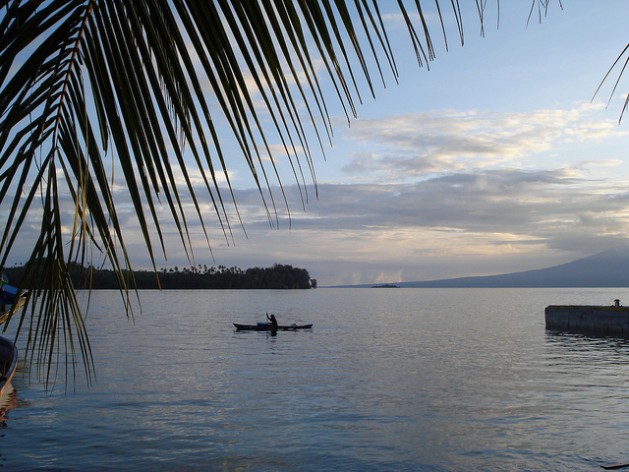 Of 10 million Pacific Islanders, nearly 50 percent live within 1.5 km of the coastline. These communities are at grave risk of numerous climate-related catastrophes from floods and tropical storms to destruction of agricultural lands. Credit: Catherine Wilson/IPS

SYDNEY, Oct 21 2014 (IPS) - The recent blockade of ships entering the world’s largest coal port in Newcastle, Australia, has brought much-needed attention to the negative impacts of the fossil fuel industry on global climate patterns. But it will take more than a single action to bring the change required to prevent catastrophic levels of climate change.

This past Friday, 30 ‘climate warriors’ from 12 Pacific Island nations paddled traditional canoes into the sea, joined by scores of supporters in kayaks and on surfboards, to prevent the passage of eight of some 12 ships scheduled to move through the Newcastle port that day.

The blockade lasted nine hours, with photos and videos of the bold action going viral online.

The warriors hailed from a range of small island states including Fiji, Papua New Guinea (PNG), the Solomon Islands and Samoa – countries where the results of a hotter climate are painfully evident on a daily basis.

“We are divided by the oceans, by the air, but we are standing on the same land and the same mother earth.” -- Mikaele Maiava, a climate warrior from the South Pacific island nation of Tokelau
Coastline erosion, sea level rise, floods, storms, relocation of coastal communities, contamination of freshwater sources and destruction of crops and agricultural lands are only the tip of the iceberg of the hardships facing some 10 million Pacific Islanders, over 50 percent of whom reside within 1.5 km of the coastline.

For these populations, the fossil fuel industry poses one of the gravest threats to their very existence.

Coal production alone is responsible for 44 percent of global CO2 emissions worldwide, according to the Centre for Climate and Energy Solutions. However, none of the small island nations are responsible for this dirty industry. That responsibility lies with Australia, the fifth-largest coal producing country in the world after China, the United States, India and Indonesia.

The World Coal Association estimates that Australia produced 459 million tonnes of coal in 2013, of which it exported some 383 million tonnes that same year.

So when the warriors chose Australia as the site of the protest, it was to urge the Australian people to support Pacific Islanders in their stance against the fossil fuel industry.

Arianne Kassman, a climate warrior from PNG, told IPS, “The expansion of the fossil fuel industry means the destruction of the whole of the Pacific.”

“The impact of climate change is something that we see every day back home. While people read about it and hear about it and watch videos we see how much the sea level has risen,” Kassman added.

Logoitala Monise from Tuvalu, a low-lying Polynesian island state halfway between Australia and Hawaii, told IPS that her home is plagued by such climate-related impacts as King tides, coastal erosion and drought, the latter being an alien concept to most Tuvaluans.

In 2011, a state of emergency was called because the islands had not received rain for six months. Monise said rainwater was their only source of relief: it was used to drink, wash and raise animals.

The increasing frequency of drought has caused the loss of livestock and plants, and major disease outbreaks in Tuvalu.

All these things, she pointed out, were the direct result of climate change.

Elsewhere in the Pacific, changing weather patterns are wreaking havoc on an ancient way of life, splitting families apart as many are forced to migrate overseas. In fact, the world’s first “climate change refugee” claimant was a national of Kiribati, who claimed his home was “sinking”, but was denied asylum in New Zealand.

Monise said her main reason for coming to Australia was to speak out against climate change so that “we Pacific Islanders can live peacefully in our homelands rather than be called climate change refugees.”

But Pacific Islanders are up against a massive industry that will not be easily dismantled.

The warriors witnessed this first-hand when they travelled to Maules Creek, near Boggabri in the Gunnedah basin in New South Wales (NSW), where Whitehaven Coal has a 767-million-dollar open cut coal project. There have been ongoing protests against the mine due to concerns ranging from biodiversity issues to concerns that the mine will cause a decrease in water table levels.

The Maules Creek community states that the Leard Forest in which the Maules Creek mine is located is an 8,000-hectare ‘biodiversity hotspot’ and has been identified as Tier 1, meaning that it cannot sustain any further loss and is also critical for the continuation of biodiversity in that area.

But these concerns may fall on deaf ears.

Coal is Australia’s second largest export earner after iron ore and according to Australia’s Prime Minister, Tony Abbott, it is essential for Australia’s prosperity.

Speaking on Monday at the opening of the Caval Ridge mine in central Queensland, a joint venture between BHP and Mitsubishi, Abbott said the mine, which will produce five-and-a-half million tonnes of coking coal a year, will add 30 million dollars to the Moranbah local economy and tens of millions of dollars to the wider regional, state and national economy.

He said the mine’s opening was a sign of hope and confidence in the coal industry.

Another project that was approved in July is the Carmichael mine in Queensland’s Galilee basin. According to Greenpeace Australia it will have six open cut mines and five underground mines and would involve the clearing of 20,000 hectares of native bushland.

According to Julie Macken from Greenpeace Australia, “What will ultimately have an effect is when there’s a chorus of voices from the low-lying Pacific nations, when there is a chorus of voices from the global financial community stating that coal is in structural decline and when the international community [and] the parties at the Paris Conference on Climate Change commit to take strong action against climate change.

“When these three things come together against the prospect of catastrophic climate change, then politicians will see that they need to do something,” Macken told IPS.

This, she said needs to happen in the next decade, otherwise the future for young people like her 20-year-old daughter is “cooked”.

Indeed, the Intergovernmental Panel on Climate Change (IPCC) says that current levels of carbon in the atmosphere are higher than they have been in three million years, and are projected to keep growing unless drastic changes are made to production and consumption patterns worldwide.

Education will be a crucial part of efforts to bring about massive international action on climate change, and the Pacific climate warriors are doing their part in their home countries.

Kassman said that 90 percent of the people who live in PNG’s rural areas do not have access to education and while they are aware that the sea level is rising, that there’s erosion along the shoreline and that food crops are changing, they don’t yet understand why.

She said 350 PNG, associated with 350.org, the U.S.-based organisation that supported the recent blockade, believes that the best way to raise awareness in a country with over 800 language groups is to train young people and send them out to the communities.

While PNG has one of the world’s lowest carbon footprints, the opening of the Exxon Mobile PNG LNG gas plant has raised the level of that footprint.

But local efforts will not be adequate without major pressure on the big polluters.

“We are taught by our parents to do the right thing,” Mikaele Maiava, a climate warrior from the South Pacific island nation of Tokelau, said at a press conference on Oct. 11. “We are divided by the oceans, by the air, but we are standing on the same land and the same mother earth.”

He said that his fellow warriors did not just represent today’s generation but the generation of the “blood that’s to come” and urged the global community to “stand together with us now and forever” in the fight against catastrophic climate change.