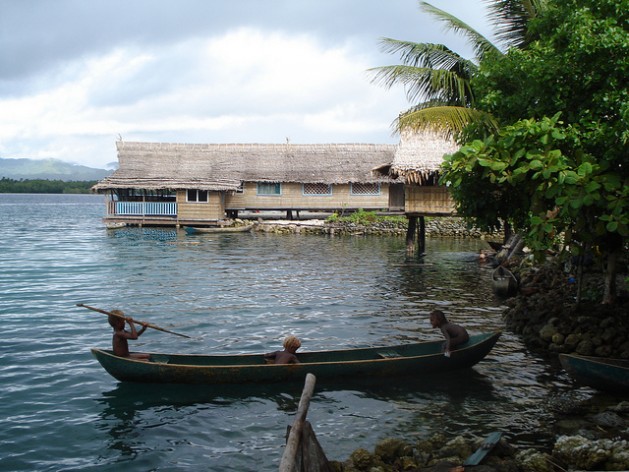 Laisene Nafatali lives in Lotofaga village, home to 5,000 people on the south coast of Upolu, the main island of Samoa, a Polynesian island state located northeast of Fiji in the central South Pacific region.

Like many on the island, she is dependent on rainfall and surface water for household needs. But without a nearby water source, such as a stream or waterfall, or a rainwater tank, she struggles with sanitation, washing, cooking and drinking.

“Instead of saving money for the children, their education, food and clothes, most of our income is spent on water." -- Laisene Nafatali, a resident of Lotofaga Village
“We only have one-gallon buckets, so if it is going to rain the whole week most of the water is lost,” Nafatali told IPS, adding that many people are unable to collect a sufficient amount of rainwater in such small containers.

“We have one bucket to store the water for the toilet, but that’s not enough for the whole family,” she added.

The wet season finished in March and now, in the dry season, it rains just two to four times per month.

Water for drinking and cooking is a priority. “If there is no rain the whole week, we pay for a truck. We put all our containers on the truck and we go to find families that have pipes and then we ask for some water. But that only [lasts] for two to three days, then we have to go again,” she said.

For washing, Nafatali and her family of six walk to the beach, which takes half an hour, and when the tide is low, they dig into the sand to find fresh water.

Most people in Lotofaga are subsistence farmers and are unable save a sufficient cash income to purchase a water tank, which costs roughly 2,700 tala (some 1,158 dollars). What little money they do have rapidly disappears in paying for transport to procure a supply from elsewhere.

“Instead of saving money for the children, their education, food and clothes, most of our income is spent on water,” she continued.

Capturing maximum rainfall is vital to long-term water security in Samoa, where 65 percent of the country’s supply is derived from surface water and 35 percent from groundwater.

The Samoa Water Authority, which services 85 percent of the population, provides water treatment plants for existing water sources in rural areas. About 18 percent of the rural population, or more than 32,000 people in 54 villages, participate in independent water schemes, which are owned and managed at the local level.

Sulutumu Sasa Milo, president of the Independent Water Schemes Association, pointed out that, while infrastructure is 40-50 years old and in need of upgrading, the scheme is vital to sustaining many rural communities.

The scheme’s gravity-fed infrastructure comprises pipes that carry water from a natural source, such as a river or spring, to villages with water tanks provided for storage. Individual households then arrange their own piped connections.

A spokesperson for the Water Resources Division of the Ministry of Natural Resources and Environment (MNRE) in the capital, Apia, said the country receives an adequate amount of annual rainfall, approximately 8,400 mm3 per year.

The challenge, according to the official, is small and steep water catchments with limited storage capacity, pressures on water resources from increasing development and observed changes in the pattern of the wet season over the past five years.

The wet season has habitually started in October and lasted six months, but now, he said, it tends to commence earlier and lasts half the predicted period, about three months.

“The difference now is that our rainfall is concentrated within a shorter period of time and it is more difficult to capture. In 2011, we received 80 percent of our annual rainfall within three months and this was mostly lost through runoff,” the spokesman stated.

Upolu Island is home to 70 percent of Samoa’s population of 190,372, as well as the capital city, and there are enormous demands for water use as a result of expanding urban development, hydropower stations, agriculture and tourism.

An MNRE environmental report last year identified the issue of forests within watershed areas, which help protect the quantity and quality of fresh water, being largely felled for agriculture, and commercial and residential development on the island. The impact of natural disasters, such as the Samoan earthquake and tsunami in 2009, and Cyclone Evan in 2012, has further degraded catchments and water infrastructure.

When droughts occurred in Samoa in 2011 and 2012, many villages, particularly on the south coast of Upolu, were left with no water as streams and catchments dried up.

Water security varies across the Pacific Islands. Kiribati and Tuvalu in the central Pacific Ocean are without any significant fresh water resources, while Papua New Guinea in the southwest has renewable water resources of 801,000 mm3 per year, in contrast to Samoa with 1,328 mm3 per year.

The United Nations Environment Programme (UNEP) reports that water resources on Upolu Island are facing ecological stress due to about 85 percent of vegetation being cleared, and waste contamination.

Samoa is on track to achieve three of the seven Millennium Development Goals (MDGs), but increasing water storage capacity and managing environmental threats are crucial to improving the rate of access to safe drinking water in Samoa, which is currently an estimated 40 percent.