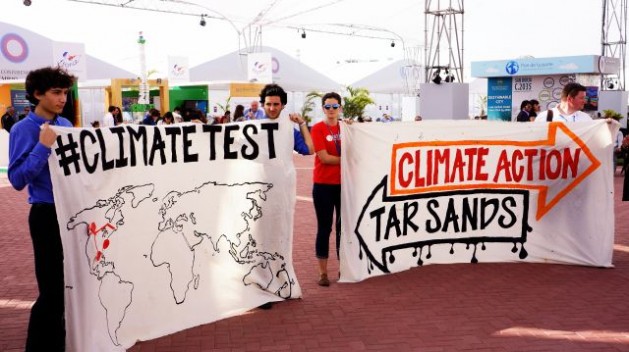 LIMA, Dec 13 2014 (IPS) - While U.S. and Canadian officials delivered speeches about how the world needs to step up to their responsibilities at the U.N. climate negotiations in Lima, Peru, activists from North America demanded clear answers back home on their governments’ relationships with fossil fuel corporations, as well as the future of several major oil projects across the continent.

U.S. Secretary of State John Kerry spoke Thursday about the role each country should play on tackling climate change and referred to the U.S.-China agreement announced in November. The agreement, which pledged unforeseen emissions reductions for both countries, has been lauded by many countries as a progressive step forward at the U.N. negotiations.

“Under Stephen Harper, Canada has no climate policy beyond public relations.” -- Canadian MP Elizabeth May

However, civil society delegates have expressed concern over the disconnect between the messaging the United States has been taking in Lima, and its domestic fossil fuel reliance.

This international discourse collides with Washington’s hesitance to repeal the Keystone XL pipeline, a proposed project that would transport over 800,000 barrels of bitumen a day from the Alberta tar sands to Texas oil refineries.

“The best way the U.S. can support progress in the U.N. Climate Talks is to start at home by rejecting the Keystone XL pipeline now,” said Dyanna Jaye, a U.S. youth delegate attending the conference with SustainUS.

TransCanada’s Keystone XL pipeline has been stalled in political procedures since 2011. Once considered to be a done deal, the project has grown to be a bone of contention among environmental groups, who have mobilised to put pressure on President Barack Obama to reject it.

Having been presented as a bill to Congress numerous times, it most recently passed a House of Representatives vote but failed in the Senate by only one vote on Nov. 5.

Youth have taken a leading role on been pushing for Kerry to reject Keystone XL, shining a spotlight on the influence of the fossil fuel industry in hindering progress.

Following Kerry’s speech to the U.N. on Thursday, Jaye and other U.S. and Canadian youth activists organised an action in protest of proposed pipelines through the two countries.

Calling for the industry to be kicked out of the negotiations, youth have highlighted that a successful deal in Lima would necessitate a phasing out of fossil fuel use to zero production by 2050, as stated in a World Wildlife Fund report.

The United States, however, isn’t the only country whose domestic issues directly contradict their statements here at COP20. The Canadian government has been criticised for their lack of domestic ambition and their close relationship with fossil fuel companies at this conference.

At the talks, Environment Minister Leona Aglukkaq stated on Dec. 9 that Canada is “confident [they] can achieve a climate agreement” at these talks, “however it will require courage and common sense.”

While the government has attempted to portray itself as a climate leader in these negotiations, members of civil society have pointed out discrepancies between the emissions goals they are promising and the emissions trajectory the country is actually on track to produce.

“Under Stephen Harper, Canada has no climate policy beyond public relations,” said Elizabeth May, a Canadian Member of Parliament and leader of the Canadian Green Party attending COP 20.

“The zeal to exploit fossil fuels has led to the evisceration of ‎environmental laws. We have distorted our economy in the interests of exporting bitumen,” she told IPS.

Canada has once again entered into the non-governmental spotlight at U.N. climate negotiations. On Tuesday, uproar ensued when Prime Minister Stephen Harper stated that any regulation of the oil and gas industry would be “crazy” considering the industry’s current financial state.

On the conference’s last day, Canada was also awarded a Fossil of the Day, a daily non-prize awarded by civil society during the Climate Talks to the most regressive country, for its consistent meddling with and lack of participation in the U.N. process.

Both countries have come under scrutiny for their promotion of climate action on the international level while promoting tar sands expansion and shale gas fracking projects at home. Shale gas has particularly been promoted by both governments as a bridge fuel to help wean societies off fossil fuels with the goal of increasing renewable energy sources.

“The use of fracking as a bridge fuel is the biggest lie the American public has ever been fed,” Emily Williams of the California Student Sustainability Coalition told IPS. “It poisons our health and our communities, and destroys our environment. It cannot be part of the climate solution as it starves the renewable energy revolution of the investment it needs.”

Both Canada and the United States have been active in calling for swift action on the international level when it comes to climate change. The U.N. negotiations are currently running over time in Lima as countries work towards a compromise agreement.