LIMA, Dec 13 2014 (IPS) - Africa is experiencing a revolution towards cleaner energy through renewable energy but the story has hardly been told to the world, says Achim Steiner, Executive Director of the United Nations Environment Programme (UNEP).

Steiner, who had been advocating for renewable energy at the U.N. Climate Change Conference in Lima, said Africa is on the right path toward a low carbon footprint by tapping into its plentiful renewable resources – hydro, geothermal, solar and wind. 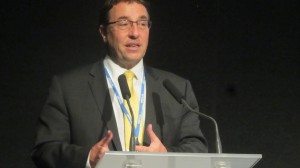 “There is a revolution going on in the continent of Africa and the world is not noticing it. You can go to Egypt, Ethiopia Kenya, Namibia, and Mozambique. I think we will see renewable energy being the answer to Africa’s energy problems in the next fifteen years,” Steiner said in an interview with IPS.

Sharing the example of the UNEP headquarters in Nairobi, Kenya, Steiner told IPS that the decision was taken that “if UNEP is going to be centred with its offices in the African continent on the Equator, there can be reason why we are not using renewable energy. So we installed photovoltaic panels on our roof which we share with UN Habitat, 1200 people, and we produce 750,000 kilowatt hours of electricity every year, that is enough for the entire building to operate.”

He noted that although it will take UNEP between eight and 10 years to pay off the installation, UNEP will have over 13 years of electricity without paying monthly or annual power bills. “It is the best business proposition that a U.N. body has ever made in terms of paying for electricity for a building,” he said.

According to Steiner, the “revolution” is already happening in East Africa, especially in Kenya and Ethiopia which are both targeting renewable energy, especially geothermal energy.

“Kenya plans to triple its electricity generation up to about 6000 megawatts in the next five years. More than 90 percent of the planned power is to come from geothermal, solar and wind power,” he said.

“If you are in Africa and decide to exploit your wind, solar and geothermal resources, you will get yourself freedom from the global energy markets, and you will connect the majority of your people without waiting for thirty years until the power lines cross every corner of the country” – Achim Steiner, UNEP Executive Director

Kenya currently runs a geothermal power development corporation which invites tenders from private investors bid and is establishing a wind power firm likely to be the largest in Africa with a capacity of 350 megawatts of power under a public-private partnership.

Phillip Hauser, Vice President of GDF Suez Energy Latin America, told IPS that geothermal power is a good option for countries in Africa with that potential, but it comes with risks.

Steiner admitted that like any other investment, renewable energy has some limitations, including the need for upfront initial capital and the cost of technology, but he said that countries with good renewable energy policies would attract the necessary private investments.

“We are moving in a direction where Africa will not have to live in a global fuel market in which one day you have to pay 120 dollars for a barrel of crude oil, then the next day you get it at 80 dollars and before you know it, it is doubled,” he said.

“So if you are in Africa and decide to exploit your wind, solar and geothermal resources, you will get yourself freedom from the global energy markets, and you will connect the majority of your people without waiting for thirty years until the power lines cross every corner of the country,”Steiner added.

The agency, which supports countries in their transition to a sustainable energy future, has yet to provide a list of countries with geothermal power potential but almost all the countries around the Great Rift Valley in south-eastern Africa – Uganda, Ethiopia, Kenya and Tanzania among others – have already identified geothermal sites, with Kenya being the first to use a geothermal site to add power to its grid. 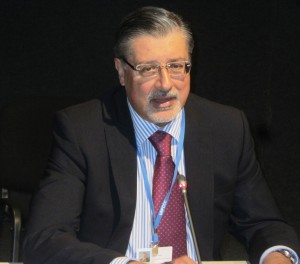 IRENA Director-General Adnan Z. Amin told IPS that the agency’s studies shows that not only can renewable energy meet the world’s rising demand, but it can do so more cheaply, while contributing to limiting global warming to under 2 degrees Celsius – the widely-cited tipping point in the climate change debate.

He said the good news in Africa is that apart from the resources that exist, there is a growing body of knowledge across African expert institutions that would help the continent to exploit its virgin renewable energy potential.

What is needed now, he explained, is for countries in Africa to develop the economic case for those resources supported by targeted government policies to help developers and financiers get projects off the ground.

The IRENA assessment found that in 2010, African countries imported 18 billion dollars’ worth of oil – more than the entire amount they received in foreign aid – while oil subsidies in Africa cost an estimated 50 billion dollars every year.

According to Amin, renewable energy technologies are now the most economical solution for off-grid and mini-grid electrification in remote areas, as well as for grid extension in some cases of centralised grid supply.

He argued that rapid technological progress, combined with falling costs, a better understanding of financial risk and a growing appreciation of wider benefits mean that renewable energy would increasingly be the solution to Africa’s energy problem.

In this context, Africa could take on new financing models that “de-risk” investments in order to lower the cost of capital, which has historically been a major barrier to investment in renewable energy, and one such model would include encouragement for green bonds.

During the conference in Lima, activist groups have been urging an end to dependence on fossil fuel- and nuclear-powered energy systems, calling for investment and policies geared toward building clean, sustainable, community-based energy solutions.

“We urgently need to decrease our energy consumption and push for a just transition to community-controlled renewable energy if we are to avoid devastating climate change,” said Susann Scherbarth, a climate justice and energy campaigner with Friends of the Earth Europe.

Godwin Ojo, Executive Director of Friends of the Earth Nigeria, told IPS that “we urgently need a transition to clean energy in developing countries and one of the best incentives is globally funded feed-in tariffs for renewable energy.”

He said policies that support feed-in tariffs and decentralized power sources should be embraced by both the most- and the least-developed nations.

Backed by a new discussion paper on a ‘global renewable energy support programme’ from the What Next Forum, activists called for decentralised energy systems – including small-scale wind, solar, biomass mini-grids communities that are not necessarily connected to a national electricity transmission grid.