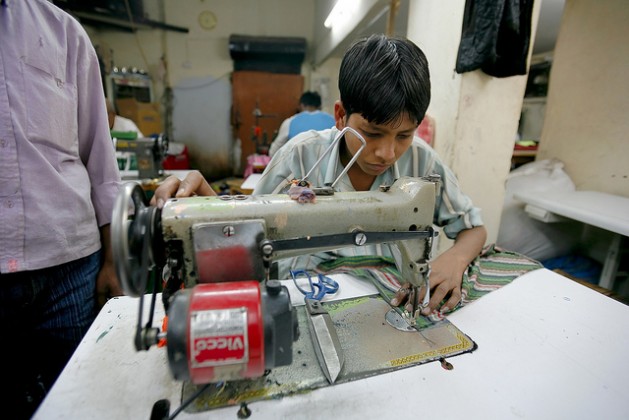 An estimated 4.35 million children between the ages of five and 14 are thought to be part of India’s workforce, working anywhere from brick kilns to carpet factories. Credit: Bigstock

The moment fume-spewing buses halt here to disgorge groups of tired and hungry passengers, the frail boy has to push his way through the crowd to sell his wares – packets of potato crisps, biscuits and hot tea, which he pours into tiny plastic cups from a metallic tea pot.

“Child slavery is a crime against humanity. Humanity itself is at stake here." -- Indian Nobel Laureate Kailash Satyarthi
As competition is fierce from other vendors, Chottu has to work swiftly to catch his customer’s eye. “I often burn my hands while pouring tea due to the rush. But I’ve no choice. Meagre sales mean no food for me that day,” says the boy who has been working since his mother died and his alcoholic father abandoned him two years ago.

His neighbour then took him under his wing and now employs him at his shop. Chottu’s salary? Two meals a day and an outhouse to sleep in.

From the posh homes of Delhi to Monsanto’s cotton fields in southern Andhra Pradesh, the sandstone quarries of Rajasthan to the firecracker factories in Sivakasi in southern Tamil Nadu, millions of ‘Chottus’ toil in restaurants, agricultural fields, hazardous glass and fireworks factories, brick kilns and construction and carpet-making industries across swathes of India.

The little ones can also be found vending food, repairing vehicles and tyres, scavenging, rag picking, shoe shining, car-washing and begging. Small factories and businesses are often guilty of employing these kids and depriving millions of them of their childhood, freedom and education. The children are usually poorly paid, underfed and are often beaten, say studies.

India has the dubious distinction of hosting the largest number of child labourers in the world. The 2011 census puts the number at 4.35 million working children in the five to 14 age-bracket.

With an estimated 23 percent of its 1.2 billion people living on less than 1.25 dollars a day, it is perhaps only natural that parents will send their children out to earn in a desperate bid to keep the family alive.

Still, a range of civil society actors are calling for a change in this status quo, claiming that unless India finds a way to interrupt the practice of child labour, it will face multiplied challenges in social, economic and political arenas.

Child slavery: A “crime against humanity”

According to the annual report of the Department of Labour, Indian children are exploited in the worst possible way. Those in the agriculture sector are made to carry heavy loads and sprinkle harmful pesticides on crops.

Last October, a blast at a firecracker-manufacturing unit at East Godavari district of the southeast Andhra Pradesh state left almost a dozen people dead including many children.

Indian Nobel Laureate Kailash Satyarthi, a child rights activist who was honoured in 2014, has been demanding a complete ban on every kind of child labour in India for kids up to 14 years.

The activist says that the state and society have failed children, making them give up their childhood and education. 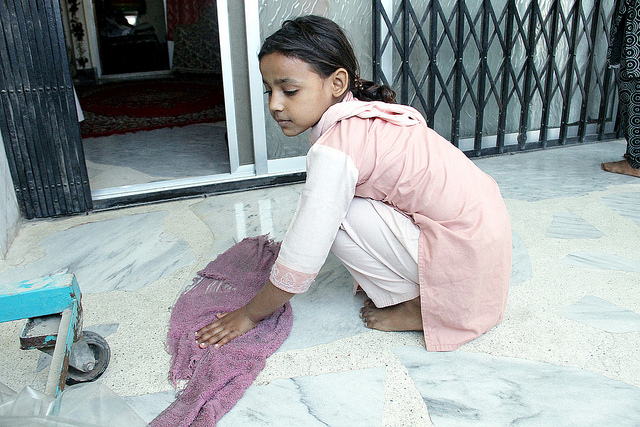 “Child slavery is a crime against humanity. Humanity itself is at stake here,” Satyarthi says. To remedy the situation, Bachpan Bachao Andolan (BBA), a non-profit which Satyarthi helms, helps parents access government funds so that they are not forced to take their children out of schools to earn extra money.

BBA has also created hundreds of child-friendly villages, where kids are freed from exploitation and enrolled in schools instead.

The Indian government banned child labour in 2012, but the ban’s implementation has been patchy, leading activists to pressure governments to strengthen legislation. Satyarthi is seeking the early passage of the pending legislation against child labour, the Child Labour (Prohibition and Regulation) Amendment Bill, which could make employment of children below 14 years in any occupation illegal.

The bill is also in sync with the Right of Children to Free and Compulsory Education Act of 2009, which guarantees free education to kids up to 14 years.

According to a recent UNESCO report, India has an estimated 1.4 million out-of-school children between the ages of six and 11 years, a staggering number that experts say could be reduced by strengthening child labour laws.

Others say the issue is not just a social problem but could have ramifications for the national economy too.

Studies suggest a strong link between household poverty and child labour with the latter perpetuating poverty across generations by keeping children of the poor out of school and limiting their prospects for upward social mobility.

This lowering of human capital has been linked to a deceleration of economic growth and retarded social development.

One report, ‘Tainted Carpets: Slavery and Child Labour in India’s Hand-made Carpet Sector’, documents over 3,200 cases across nine states in India and quotes several hundred cases each of forced labour at carpet factories run by exporters who ship these rugs to retail stores in the U.S.

Asthma and tuberculosis were prevalent among 90 percent of those involved in gunpowder filling and directly in contact with the chemical ingredients of crackers and matches. These workers, says the survey, are usually not given any protective gear and work with hazardous chemicals such as sulphur, aluminium powder and gun powder

Many Indian non-profits have come up to fight against child labour but they admit that until the government takes real initiative, the situation will remain dismal.

“While the passage of the new law will give children’s rights a huge boost, child labour cannot be successfully uprooted without focussing on the socio-economic condition of the kids’ families, which force them to send their children out to work,” Ranjana Kumari, director of the Center for Social Research, told IPS.

A multi-pronged approach involving multiple stakeholders, say experts, is the key to addressing the child labour problem in India.

“Elimination of poverty, free and compulsory education, proper and strict implementation of the labour laws and abolishment of child trafficking can help solve this problem to a large extent. Statistics show that education has helped in reducing child labour in western countries to a large extent,” Dr. Vinita Shroff, a visiting professor of sociology at Delhi University, told IPS.

After the 86th Amendment of the Indian Constitution in 2002, the provision for free and compulsory education for the age group of six to 14 years has been included as a fundamental right under Article 21A. Activists say this needs to be implemented stringently by the government.

Amod Kanth, founder of the non-profit organisation Prayas, which works in the area of children’s welfare, believes the relationship between government and civil society is vital to eliminate child labour.

“The Child Labour Act is an outdated law, which recognises only those under 14 as children and covers only hazardous work. We need legislation that’s more nuanced as well as more rigorous and comprehensive.”

According to the erstwhile commissioner of police, India needs a focused nationwide program to protect kids from trafficking and forced labour. “Banning child labour is the first step. Providing those children who are rescued out of illegal employment with education, rehabilitation and safety is equally imperative,” Kanth told IPS.