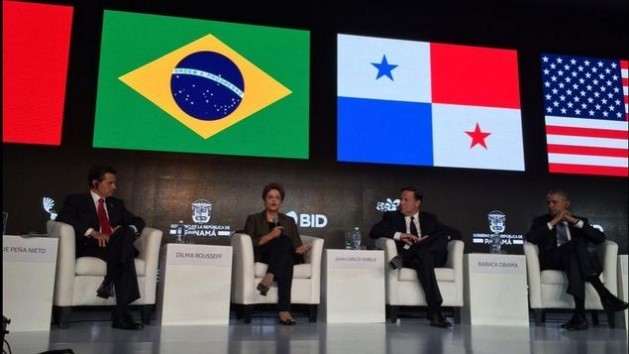 Brazilian President Dilma Rousseff with her counterparts from Mexico (left), Panama and the United States, during a panel at the Second CEO Summit of the Americas, Friday Apr. 10 in Panama City. Credit: Courtesy of the IDB

PANAMA CITY, Apr 11 2015 (IPS) - Predictions of a sharp slowdown in Latin America’s economic growth this year make it even more necessary for the region’s leaders to make commitments to boost prosperity with equality during the Seventh Summit of the Americas, currently taking place in the Panamanian capital.

In several of the summit’s forums, the executive secretary of the Economic Commission for Latin America and the Caribbean (ECLAC), Alicia Bárcena, said the regional economy was expected to grow a mere one percent in 2015, after GDP growth amounted to just 1.1 percent in 2014.

The two-day inter-American summit that opened Friday Apr. 10 has once again brought together high-level representatives of the governments of the 35 countries of the Western Hemisphere, with the novel inclusion of Cuban President Raúl Castro making it a historic meeting.

The heads of state and government, and parallel civil society, academic, youth and business forums, are meeting in Panama City to debate the central theme “Prosperity with Equity: The Challenge of Cooperation in the Americas”.

Brazilian President Dilma Rousseff put an emphasis on a key issue of the economic slowdown: the serious social impact it could have in the world’s most unequal region.

In a panel in the Second CEO Summit of the Americas, also attended by the U.S., Mexican and Panamanian presidents, Rousseff said the region should work hard to keep the large numbers of people pulled up into the middle class by social policies in recent years from falling back into poverty.

According to ECLAC, South America will show the worst economic performance – close to zero growth – compared to 3.2 percent growth in Central America and Mexico and 1.9 percent in the Caribbean.

The president of the Inter-American Development Bank (IDB), Luis Alberto Moreno, also warned that the governments must take measures to prevent the economic stagnation from undoing the great achievement of the last decade, when poverty in the region dropped from around 50 percent 15 years ago to less than 30 percent today.

In the panel, U.S. President Barack Obama called on governments in the region to cooperate to create mechanisms towards lifelong education, in order for the hemisphere to continue to grow.

“We have to replace the dynamic of extractivism with a culture of sustainability,” Bárcena said in another panel. In her view, the drop in the rate of growth should drive new social pacts in the region, in order to keep up the efforts to curb inequality.

“Without equitable distribution of wealth, there will be neither growth nor development,” Erick Graell, secretary of Panama’s Central Nacional de Trabajadores trade union confederation, told IPS. He participated in the alternative People’s Summit.

Behind barriers at the University of Panama, 3,000 members of social and labour movements from the Americas are meeting Thursday Apr. 9 to Saturday Apr. 11 in the alternative meeting to the official summit organised by the Organisation of American States (OAS). 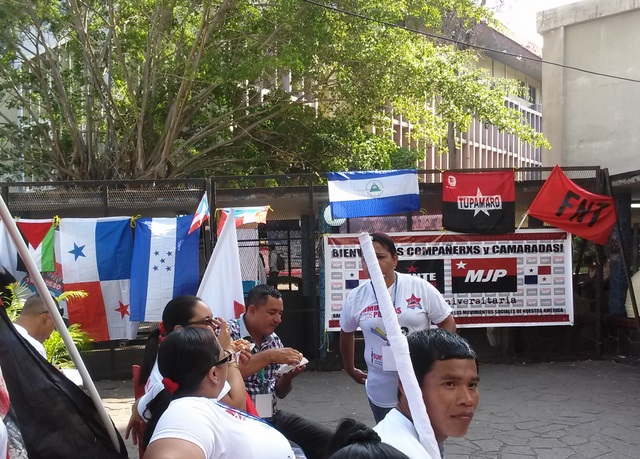 Representatives of indigenous communities from Latin America grab a bite to eat outside the People’s Summit, in the University of Panama assembly hall on Friday Apr. 10. The alternative gathering is taking place parallel to the Apr. 10-11 Seventh Summit of the Americas. Credit: Ivet González/IPS

At the People’s Summit, women and men in colourful traditional indigenous dress walk around the university assembly hall, where social protest chants can be heard and the walls are festooned with posters and phrases of legendary Argentine-Cuban guerrilla leader Ernesto “Che” Guevara (1928-1967) and other historic leaders of Latin America’s left.

Participants from Canada and the United States mingle with the predominant racially and culturally diverse South American, Central American and Caribbean crowd at the People’s Summit, attended Friday by Bolivian President Evo Morales, and which expected the participation of Venezuela’s Nicolás Maduro, Ecuador’s Rafael Correa and Cuba’s Raúl Castro.

“It has become a tradition that every time the presidents get together in their elite summits, ignoring the country’s development, social movements hold this alternative meeting,” said Graell, with the People’s Summit organising committee.

“We are going to express our concerns about poverty and inequality in the recommendations we send the presidents,” the trade unionist said with respect to the citizen gathering whose first edition was held parallel to the Fourth Summit of the Americas in Mar del Plata, Argentina in 2005.

The alternative forum, whose slogan this year is “A homeland for all, with peace, solidarity, and social justice,” is discussing issues such as human, economic, social and cultural rights, democracy and sovereignty, trade union freedom, migration, indigenous communities, education, social security and pensions.

Investing more in education is key to leaving behind dependence on commodities and to strengthening the knowledge sector and technology, which would guarantee economic and social sustainability, said ECLAC’s Bárcena. At the same time, she said, it is a challenge for governments, given the economic slowdown.

Latin America and the Caribbean must close structural gaps in terms of production, education and income levels to advance towards inclusive and sustainable development, because inequality conspires against the stability of democracies, Bárcena said.

“There is a lack of coordination at the government level to reduce regional disparities,” said Jorge Valdivieso, executive secretary of the Central Obrera Boliviana trade union confederation. “One example of this is that there are borders between our countries and visa requirements. Latin America is one single country,” he told IPS at the People’s Summit.

Salvadoran nurse Idalia Reyes, who is taking part in the alternative summit in representation of the trade union of workers of El Salvador’s social security institute, told IPS that “cooperation can help improve the quality of life of local communities.”

She stressed that several countries, including Brazil, Cuba or Venezuela, have regional cooperation programmes in areas such as scientific research, productivity, post-disaster recovery, health and education, despite their internal limitations.

But she lamented that in the case of the United States, support for countries in the region “comes with so many conditions attached.”

“It has a lot to offer but it should stop always asking for something in exchange,” said the activist who lives in a region – Central America – marked by high levels of violent crime and migration to the United States.

In an attempt to reduce the exodus by bolstering economic growth and security, in November 2014 El Salvador, Guatemala and Honduras presented the plan for the Alliance for Prosperity in the Northern Triangle, which the United States is supporting with one billion dollars. It will be added to efforts towards customs and trade integration.

The activist brought to the alternative summit the demand to avoid the privatisation of the pensions of the working class – a phenomenon she said was a growing problem in Central America. “We want mixed, secure pensions, to which the government and workers throughout their working years contribute,” she said.