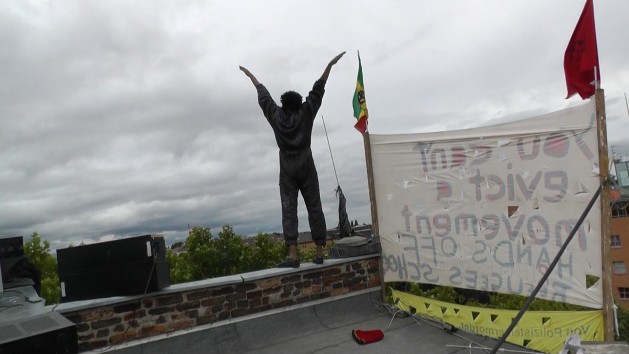 Refugees in Berlin defied a municipal eviction order in June 2014 with a nine-day hunger strike on the rooftop of a vacant school building using the slogan “You Can’t Evict a Movement” which today has become the rallying cry of the refugees’ movement in Germany. Credit: Denise Garcia Bergt

BERLIN, May 21 2015 (IPS) - In a move to take their message of solidarity to refugees across the country and calling for their voices to be heard in Europe’s ongoing debate on migration, Germany’s asylum seekers have taken their nationwide protest movement for change on the road under the slogan: “You Can’t Evict a Movement!”.

Earlier this month, in a twist to conventional protest movements, refugees organised a Refugee Bus Tour across Germany, turning action into networking through mobile solidarity.

“We wanted to go out and bring a message of solidarity to all corners of Germany, to meet other refugees and tell them not to be afraid, to take life into their own hands and above all that you are not a criminal,” Napuli Görlich told IPS, tired but relieved after a month of travelling.

"In dictatorships, young people suffer systematic oppression for a mere criticism of the regime. Faced with joblessness and lack of freedom of expression, they will seek legal or illegal emigration following the lure of the foreign media's often empty slogans of justice and freedom" – Adam Bahar, Sudanese blogger and campaigner for Germany’s refugee movement

On the morning of Apr. 1, Napuli had stood on this same spot, flanked by fellow campaigners Turgay Ulu,  Kokou Teophil and Gambian journalist Muhammed Lamin Jadama, staring at the burnt-out refugee Info Point in Berlin, victim of one of a number of disturbing arson attacks this year, including one on a refugee home in Tröglitz, in the eastern state of Saxony.

Until the day before, the Info Point had functioned as a social solidarity base in the heart of Berlin’s Oranienplatz square, known here as the O’Platz. The square holds a symbolic importance as the central stronghold of the nation-wide refugee movement.

“That was a very sad moment for us,” said Napuli. “Such brutal attacks hit us where it hurts most, in our sense of vulnerability, precariousness, and invisibility,” she continued, vowing that the Info Point, registered as an art installation in Berlin’s Kreuzberg district, will be rebuilt.

One of the most vocal and resilient personalities of the German refugee movement, Napuli was born in Sudan and studied at the universities of Ahfad and Cavendish in Kampala.  A human rights activist, she suffered torture and persecution for running an NGO and fled to Germany, where she has been with the refugee movement ever since.

From the start, she has also been associated with the O’Platz “protest camp”, which became her home and that of 40 other refugees in October 2012.  They had pitched their tents in the square after a 600 km march from what they termed a “lager” reception centre in Würzburg, Bavaria. The refugees stayed, on braving the elements, until the district council ordered bulldozers to tear it down in April last year.

“When they came to clear the camp I had nothing, absolutely nothing, only a blanket on my shoulders,” Napuli recalled. For the next three days, she took her blanket, her protest and her rage at the lack of an agreement with the Berlin authorities up a nearby tree, literally.

Germany’s refugee movement was sparked by the suicide of a young Iranian asylum-seeker Mohammad Rahsepar who hanged himself in his room at the Würzbug reception centre on Jan. 29, 2012.  En route to the German capital the marchers stopped by other “lagers”, starting to raise awareness about the inhumane conditions of isolation for asylum applicants, inviting them to leave their camps and join the march for freedom to Berlin.

Since then, the movement has been calling unequivocally for abolition of Germany’s enforced residence policy, or “Residenzpflicht”, a lager system which effectively denies asylum-seekers freedom of movement.

Other demands are an end to deportations, and rights to education, the possibility to work legally and access to emergency medical care, so far unavailable to asylum seekers.

After the O’Platz protest camp was razed to the ground, many of the prevalently African refugees occupied a vacant school building in Berlin, the Gerhardt-Hautmann-Schule in the Kreuzberg district’s Ohlauerstrasse, where they ran social and cultural activities until June 2014.

The local authorities attempted to enforce an eviction order, flanked by a 900-strong federal police force, and barring all access to visitors, press, voluntary organisations and even Church groups were denied access to the school or delivery of food.

Refusing to leave the building, some of the refugees took to the school’s rooftops for a nine-day hunger strike and standoff, waving a banner with the slogan “You can’t evict a movement”, which has now become the rallying cry of the refugees’ movement.

Some, like Alnour, Adam Bahar and Turgay Ulu, continue to live here, still hopeful that the district will agree to a proposal to set up an international refugee centre here and that they may be able to receive visitors.

Angela Davis, the iconic U.S. civil and human rights activist, was denied access when she tried to visit them on the premises recently.  “The refugee movement is the movement of the 21st century,” said Davis, referring to the plight of migrants worldwide. 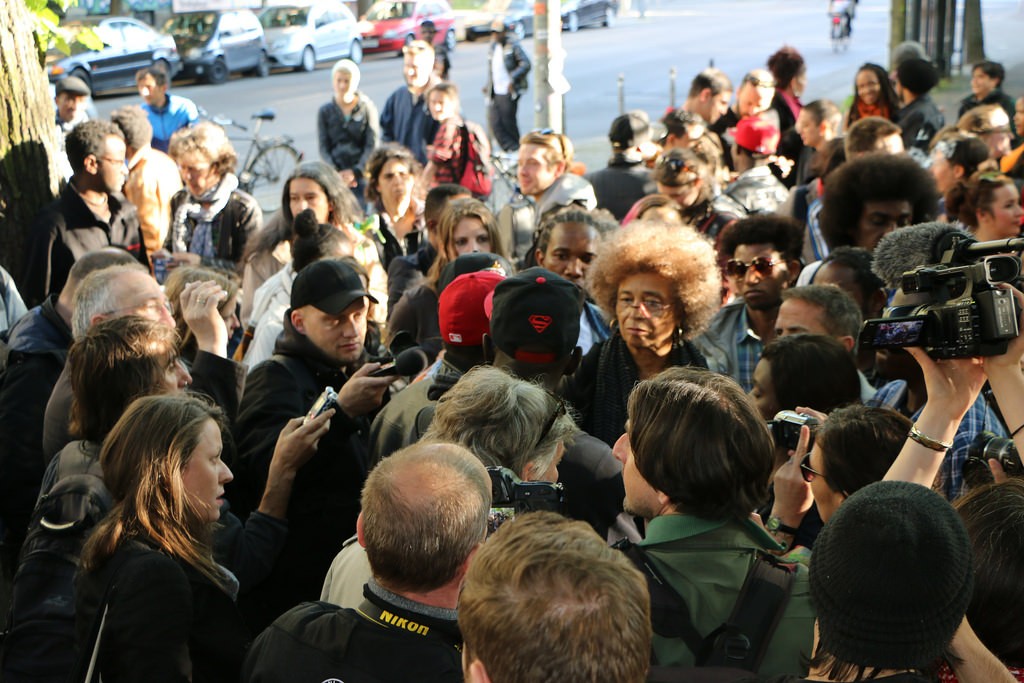 During her May 2015 visit to Berlin, Angela Davis brought a message of support to members of the German refugee movement outside an occupied school building in Berlin’s Kreuzberg district. Credit: Francesca Dziadek/IPS

“The Polizei can come at any time of night and snatch us away; we are under constant threat of deportation. I am feeling very stressed, I cannot sleep very well,” Alnour told IPS, explaining how they have had to make do with one, cold, defective shower for 40 people.

Undeterred on his return from the Refugee Bus Tour, Turgay Ulu, a Turkish journalist who was tortured and imprisoned as a dissident for 15 years, published the refugee movement’s magazine and is an active network organizer, has a very busy “working” schedule.

“There is a lot to do, from organising sleeping places for the homeless, writing and producing video content, organising spontaneous demonstrations and occupations, musical events, theatre performances, and consciousness-raising on national and international refugee bus tours,” Ulu told IPS.

“We have two choices, we either sit in the lagers and eat, sleep and eat again and go crazy, or we protest.”

Germany’s problem has been the exceedingly long waiting times necessary for processing asylum applications.  The United Nations has reported that in 2014 the country had the highest number of asylum applications since the Bosnian War in 1992. There are reportedly 200,000 asylum applications still outstanding and it is being predicted that this will have risen to 300,000 this year.

Adam Bahar, a Sudanese blogger and one of the refugee movement’s campaigners, told IPS that his dream of a better life of freedom and wealth evaporated when he reached Europe, where he soon realised that freedom and human rights are not for everyone to enjoy.

“In dictatorships, young people suffer systematic oppression for a mere criticism of the regime,” he said. ”Faced with joblessness and lack of freedom of expression, they will seek legal or illegal emigration following the lure of the foreign media’s often empty slogans of justice and freedom.”

Today, continued Bahar, who is in demand as a speaker and gives seminars at Berlin’s Humboldt University, “colonialism, which was born in Berlin in 1884, is being implemented by starting wars and marketing weaponry.”

As politicians busy themselves with strategies and programmes and allocating resources to more programmes to hold back refugees, they should be naming and shaming the real culprits instead, he said. “Change begins by uprooting dictators who are clandestinely colluding to misuse their nation’s wealth and remain in power thanks to the support of the pseudo democracies of the first world.”

Meanwhile, the refugee movement’s unified front appears to be making some, albeit limited, headway. The forced residence system, for example, has been abolished in a number of federal states and the Berlin Senate has just announced plans to provide refugee shelter accommodation to be completed by 2017 in 36 locations for 7,200 asylum seekers spread out across Berlin’s local districts at an overall cost of 150 million euros.

Germany is currently walking a tightrope between honouring its international humanitarian responsibilities, pursuing its international economic interests, including its remunerative arms sales contracts, and handling dangerous right-leaning swings in public opinion against immigrants.

At the same time, Germany is pursuing a risky carrot-and-stick immigration policy agenda which is sending out contradictory signals – a 10-year-old immigration law which placed Germany on the map as a land of “immigration” for highly skilled foreigners, while tightening restrictions for those who are not deemed to be candidates for economic integration.

At issue is the divisive policy which places refugees in “asylum-worthy” categories. “In Germany there are three categories of refugees,” Asif Haji, a 30-year-old Pakistani asylum seeker, told IPS.

“The first are Syrians and other Middle East refugees who are awarded permits and education. Second come the Afghans and Pakistanis, who have to struggle a bit but are allowed language school and work permits. But then there are the Africans who are widely perceived as economic migrants leeching on the system and petty criminals dealing in drugs who are not particularly welcome anywhere.”

“This is unfair,” he said. “Human tragedy should not be classified.”