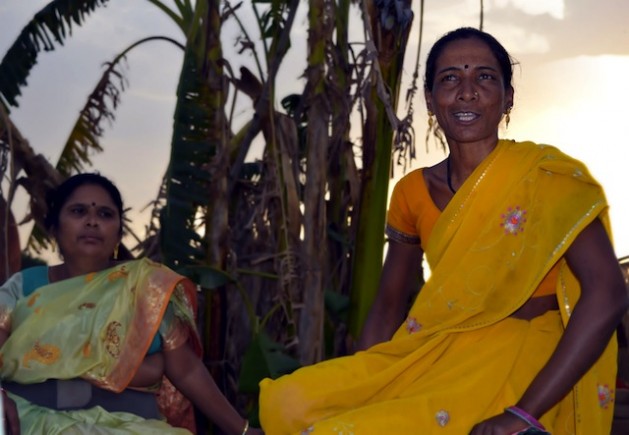 BETUL, India, Jun 4 2015 (IPS) - Mamta Bai, 36, distinctly remembers the first time the police came to her village: it was December 2014 and her neighbour, Purva Bai, had just been beaten unconscious by her alcoholic husband, prompting Mamta to make a distress call to the nearest station.

Once in the neighborhood, policemen pulled the abusive husband out of his home and asked the village women if they wanted him to be arrested.

“We want a life of dignity, free of violence. Nothing else matters more than that.” -- Ramvati Bai, a survivor of domestic violence and member of Narmada Mahila Sangh, a local rights group in central India
“Yes,” they answered in unison. But first, they wanted him to be tied to a pole in the middle of the village. “We wanted everyone to see what would happen to wife beaters from now on,” recalls Mamta Bai, a ‘Kanooni Sakhi’ (meaning ‘legal friend’ in Hindi) with the local rights group Narmada Mahila Sangh (NMS).

Spread across 213 villages in the central Indian state of Madhya Pradesh, the organisation helps victims of domestic violence seek justice. But as the incident above indicates, these activists are not your average legal defenders.

Steeped in the harsh realities that govern life in India’s vast and lawless central states, the women know that the justice system here – from the police stations to the courts to the jails – are riddled with corruption, bureaucracy and entrenched patriarchal attitudes.

So they seek local solutions to their problems.

In this case, they weren’t content to let the offender spend a few nights in jail only to return to the same home and habits as before. So they went a step further, and extracted from Purva Bai’s husband a signed letter to the local police chief in which he vowed never to hurt his wife again.

“We wanted to teach him a lesson. The arrest and the humiliation of being tied to a pole in public view made him afraid,” says Santri Bai, another NMS member. “Now he knows, 42 of us [women] are ready to send him to the prison if he ever ill-treats his wife.”

Narmada Mahila Sangh operates in the Betul and Hoshangabad districts of Madhya Pradesh, a state that has an exceptionally high rate of gender-based violence, with 62 percent of women experiencing some form of abuse compared to the national average of 52 percent.

These crimes include molestation, marital rape, murder, beatings, dowry-related killings and, in the case of women suspected of practicing ‘witchcraft’, torture and burnings.

Despite this grim reality, NMS was not founded to tackle gender-based crimes. It began in 2002 as a federation of women’s self-help groups focused on economic empowerment, with each unit running small savings schemes and generating collective loans to improve their livelihoods.

According to the Planning Commission of India, Madhya Pradesh has an extreme poverty rate of 35 percent, compared to India’s national average of 25 percent. This means that the state is home to some 30 million people living on less than 1.25 dollars a day.

But as the women began spending more time on trying to break the cycle of poverty, they faced backlash from their husbands and other community members. 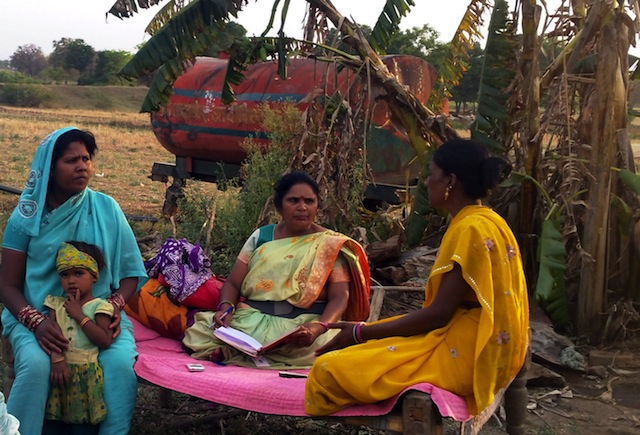 “Women began to attend meetings, visit each other’s homes, discuss livelihood options and also take more interest in the affairs of their own family, such as their children’s education,” explains Asha Ayulkar, a resident of Chiklar village, not far from Betul town.

“This angered family members, especially men who saw it as women challenging their authority and breaking with tradition. They beat them as punishment.”

So in 2012, having grown its membership to over 9,000 members, NMS began a kind of ‘crusade’, launched with the belief that changing women’s economic situation could not be accomplished without simultaneously tackling deeply entrenched patriarchal values.

The first order of business was to secure some kind of training, since few women in these rural areas have a formal education let alone specialised legal expertise.

While the literacy rate for Madhya Pradesh is estimated to be 70 percent, it falls to just 60 percent for women – and even this gives no real indication of true literacy levels, since many girls drop out before completing secondary schooling.

With the help of civil society organisations like Pradan, a non-profit that works to empower marginalised communities, 30 members of NMS are now trained paralegals and they in turn run workshops for other women in the villages on a range of issues from understanding existing laws and policies, to learning how to conduct a basic investigation before approaching the police.

“We also learn of how to talk to a survivor and counsel her – a Kanooni Sakhi must meet her alone, lock eyes with her, and appear strong, yet sympathetic,” Ayulkar explains to IPS.

“Together we learn about the Indian Penal Code and its various articles relating to torture, assault, rape and dowry deaths.”

Although the 50-year-old only studied until the 6th grade, she is today the district’s most respected paralegal, and boasts a success rate of over 80 percent.

The initiative, though small when compared to the scale of gender-based violence in this country of 1.2 billion people, is an example of how community justice can often be more effective than the centralised legal system.

Sexual and physical abuse is a grossly underreported offence throughout India, with a recent study published by the American Journal of Epidemiology revealing that only two percent of victims of gender-based crimes report the incident to the authorities.

This could be due to the dismal conviction rate, which the National Crime Records Bureau (NCRB) estimates at just 30 percent – meaning seven out of 10 perpetrators generally walk free.

Even those that are booked for a crime often spend a few years – sometimes even just a few days – in jail before rejoining the community.

Various Kanooni Sakhis (legal friends) tell IPS that attackers get off scot-free by bribing the police. Other times, authorities simply refuse to report complaints at all – activists recount incidents of women sitting for entire days at police stations attempting to file a First Information Report (FIR).

“So NMS trains women on how to lodge their cases, how to request public prosecutors when they can’t afford a lawyer and how to check the status of a complaint by using the Right to Information Act,” Mamta Bai tells IPS.

Lawyers from the Indian capital of New Delhi and Madhya Pradesh’s capital, Bhopal, have all participated in trainings schemes to strengthen the women’s group.

The result, experts say, is impressive.

“The women are now keeping records of each case,” Angana Gupta, assistant manager at the Mumbai-based L&T Finances – one of Pradan’s partner organisations – tells IPS. “They have files for each case with details of the evidence, the steps taken and the official responses. They are also using mobile phones and tablets to network with fellow gender activists.”

Learning the law was the easy step. The harder part has been – and will continue to be – changing social attitudes in these rural areas.

Take the case of Ramvati Bai, a tribal woman in Bakud village. A widowed mother of two, Ramvati was sexually harassed and assaulted by her father-in-law for three years. But when she finally gathered the courage to file a complaint, the police dismissed her, calling it a “family matter”.

It was only after her fellow NMS members intervened that the police registered a case and arrested the accused. But this angered Ramvati’s relations who ordered her to leave their home.

Phulkali Bai of Borgaon village was also thrown out of her home a few weeks ago after she filed a court case against her physically abusive in-laws.

Fortunately for both, NMS has offered steady support, helping them get back on their feet by finding work and building their own huts to live in.

But some, like 28-year-old Nirmala Bai, are not so lucky. She died in 2013, after her husband allegedly strangled her and set her body on fire. The police arrested the husband for abetment of suicide but then released him on parole.

Despite their determination to seek justice for the deceased girl, NMS had to abandon the case as the victim’s family members refused to came forward to bear witness.

They don’t let these setbacks get them down. They continue their micro-savings schemes and push ahead with the cases that need their help. Village Protection Committees identify threats or patterns and try to step in before tragedy occurs. If it does, NMS members help each other to keep moving.

“We want a life of dignity, free of violence,” Ramvati Bai tells IPS. “Nothing else matters more than that.”